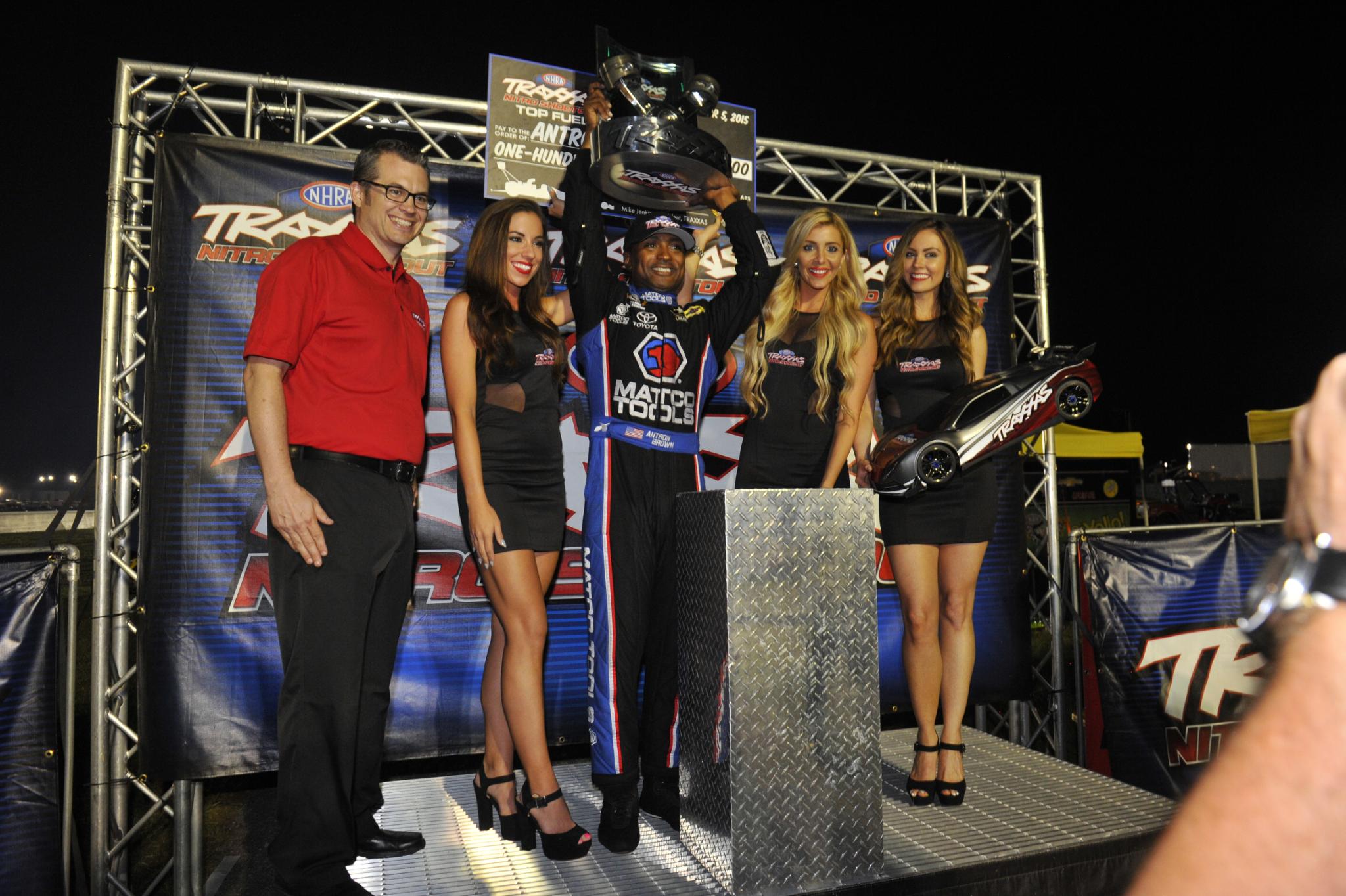 Antron Brown raced to victory in the Traxxas Nitro Shootout on Saturday , earning a $100,000 payday during an action packed Saturday at the Chevrolet Performance U.S. Nationals.

Brown, the 2012 Top Fuel world champ, took the victory at the Lucas Oil Raceway at Indianapolis despite having to pedal his Matco Tools dragster down track, running a 4.147-second pass at 220.62 mph to defeat Doug Kalitta in the final of the all-star bonus event. It was Brown's first win in the Traxxas Nitro Shootout, having defeated J.R. Todd and Richie Crampton to reach the final.

"The main thing is we were able to sneak away with that win," said Brown, who also won the Pro Stock Motorcycle all-star race at Lucas Oil Raceway at Indianapolis in 2000. "When you race a Kalitta car in the final for $100,000, they'll throw a big run on you. We both didn't make it down cause we were pressing hard and we knew what was at stake."

Kalitta, appearing in his first Traxxas Nitro Shootout final, ran a 6.588 at 86.46 after his DeWalt Tools dragster quit shortly after the hit of the throttle. He defeated Shawn Langdon and fan vote lottery winner Clay Millican en route to the final.

Dixon was the top qualifier on Saturday in Top Fuel with a 3.744 at 326.00 in his C&J Energy Services dragster. A three-time world champ, Dixon is searching for his second No. 1 qualifier of the season and 53rd of his career with two sessions remaining. Dixon is a four-time winner of the world's most prestigious drag race.

"Other than trying to win the event, points wise we'd like to try to get back into third place," said Dixon on his goals for this weekend. "We got bumped down last week. It's worth those points at the end of the year. I've lost a championship by two points and you never want to leave any on the table."

In Funny Car, Beckman continued his hot streak with a 3.936 at 323.74, both track records, claiming the qualifying lead in his Infinite Hero Foundation Dodge Charger R/T. Beckman has had an incredible last few races, resetting the national record multiple times and winning two of the three races during the NHRA Western Swing. Beckman, the 2012 world champ, is gunning for his fifth No. 1 qualifier of the season, and fourth in a row.

"We went a 3.91 in testing (here) last week in way better conditions," Beckman said. "The delays helped bring the track back into that zone where we could run a mid-three. We had that data with the 3.94 from Sonoma and it went within six thousandths on that run. When the car becomes that predictable, it becomes a tough combination to beat."

Brainerd winner Robert Hight drove his Auto Club Chevy Camaro SS to a 3.971 at 322.96, good enough for the provisional No. 2 spot. Tommy Johnson Jr., one of the most consistent Funny Cars the last few months, sits third with a 3.976 at 318.32 in the Riley Children's Hospital Dodge Charger R/T.

Anderson claimed the provisional No. 1 in Pro Stock with a 6.562 at 210.70 in his Summit Racing Chevy Camaro, achieving the feat during the final pass of the second session. Anderson, a four-time world champ and six-time Indy winner, is going for his second No. 1 starting spot of the season and 77th of his career.

"I'm very happy with the car and the performance so far," said Anderson, who is looking for his third No. 1 qualifier at Indianapolis. "It's sad we lost last night's run but today was great. I was second after the first run and first after the second. We're going in the right direction and that's why I love Indy."

[adinserter name="GOOGLE AD"]Jonathan Gray sits second with a 6.567 at 210.05 in the Gray Motorsports Chevy Camaro. Local favorite Drew Skillman, a leading contender for the Auto Club Road to the Future Award, is third after posting a 6.570 at 210.05 in the Ray Skillman Racing Chevy Camaro.

Ellis ran a 6.862 at 193.63 on the Junior Pippin Trucking Buell to claim the qualifying lead in Pro Stock Motorcycle. Ellis is looking for his third No. 1 qualifier of the season and 16th of his career.

"We've been trying to get the clutch straightened out," said Ellis, whose last victory came in 2008. "We came here and tested last Wednesday. I think we are starting to get a handle on it. I had all the faith and confidence in my engine builder and team that we can get this job done."

Andrew Hines is second on his Screamin' Eagle Vance & Hines Harley-Davidson with a 6.879 at 193.29. Louisiana alligator farmer Jerry Savoie is third with a 6.896 at 194.35 on the Savoie's Alligator Farm Suzuki.

Veteran rider Joe DeSantis went for a wild ride when his Suzuki went out of control and crashed near the finish line during his first qualifying attempt of the weekend. He was checked and released by NHRA Emergency Services Officials on the scene.

Qualifying for the Chevrolet Performance U.S. Nationals wraps up Sunday with sessions at 11 a.m. and 2:45 p.m. The Traxxas Nitro Shootout for Funny Car will feature rounds at 12:30 p.m., 2 p.m. and 4:15 p.m. Monday's eliminations are scheduled for 11 a.m.