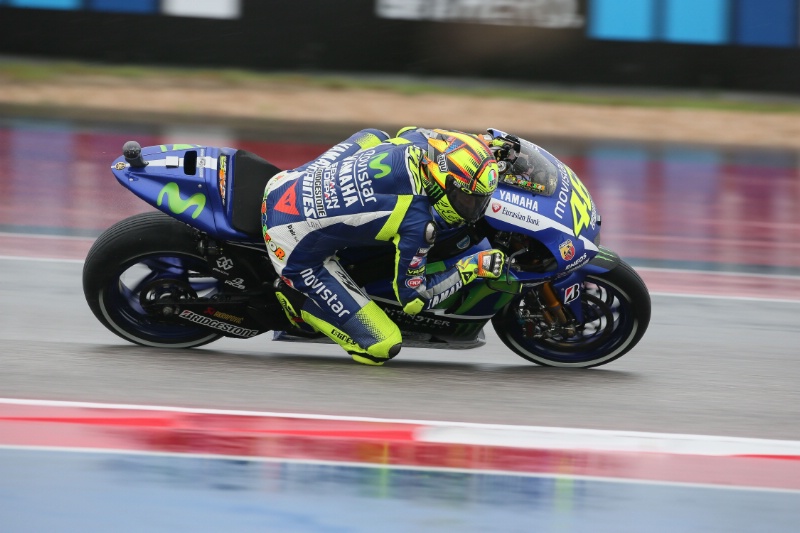 Movistar Yamaha's Valentino Rossi produced a fearless ride in the rain to claim his first ever victory at Silverstone, and open up a 12 point lead in the MotoGP World Championship standings over his teammate Jorge Lorenzo.

Rossi had earlier topped the wet Warm Up session, and there was drama before the lights even went out at Silverstone as it was originally declared a dry race, but rain on the grid prompted every rider to return to the pits on their warm up lap to swap for wets. This led to a 30-minute delay to allow the teams and riders to safely reform back on the grid.

When the action started in anger, Rossi enjoyed a solid start, before moving his way up from 4th on the grid to take the lead on just the second lap. Rossi managed to pass his teammate and main title rival Lorenzo at Village corner, much to the delight of the 73,000 fans at the legendary Silverstone Circuit.

He then tried to break away at the front, with only Marc Marquez on the Repsol Honda able to stay with him. Lap after lap Rossi and Marquez pulled away at the front, opening up a gap of 7 seconds to the 3rd placed Petrucci by just the ninth lap. The 36-year-old Italian was setting a blistering pace in the dreadful conditions, and it proved too much for even Marquez. The reigning MotoGP World Champion crashed out on lap 13 at Copse Corner to effectively end any chance he had of defending his title. The Spaniard now trails Rossi by 77 points in the standings, with just 6 races remaining.

Without Marquez to push him, Rossi seemed to relax and at one point it seemed as if the chasing Ducati's of Danilo Petrucci and Andrea Dovizioso would close him down towards the end of the race. Petrucci had reduced the gap to just 1.6s with two laps remaining, but Rossi got a signal from his pit board and upped the pace once more. The ‘Doctor' went on to take the race win by 3.010s.

Octo Pramac Racing's Danilo Petrucci delivered an incredible ride to secure his first ever MotoGP podium as the leading Satellite rider. The Italian, starting from 18th on the grid, rode through the pack superbly before getting involved in an excellent battle for second with Dovizioso on the factory Ducati Team GP15. Petrucci's GP14 is known as a good bike to ride in the wet and he made sure that he secured his best ever MotoGP career result to the delight of his team.

Ducati Team's Andrea Dovizioso (+4.117s) completed an all-Italian podium to equal his best result of the season in Assen. The former 125cc World Champion started from 12th on the grid but rode superbly in the tricky conditions to secure his 29th MotoGP Podium.

Rossi's main title rival and teammate Jorge Lorenzo (+5.726s) had a frustrating race. The double MotoGP World Champion led into the first corner, but found himself dropping back through the field at an alarming rate. At one point Lorenzo was as low as sixth before he seemed to recover and fought back to cross the line in fourth, limiting the damage to his title chances.

Dani Pedrosa (+11.132s) on the second Repsol Honda battled hard throughout the race to secure fifth spot. The Spaniard was right in the mix for the podium during the race but started to drop back in the latter stages, eventually crossing the line over 5 seconds behind Lorenzo.

EG 0,0 Marc VDS's Scott Redding (+25.467s) won the ‘Battle of the Brits' as he pulled off his the best result of his MotoGP career in front of his passionate home support. His compatriot Bradley Smith on the Monster Tech 3 Yamaha was a further second back, after he enjoyed a race long battle with his teammate Pol Espargaro, before the Spaniard crashed out at turn 3 on lap 14.

Nicky Hayden (Aspar MotoGP Team) was the leading Open Honda in 12th ahead of the Avintia Racing duo of Hector Barbera and Mike Di Meglio, while his teammate Eugene Laverty crossed the line in 17th.

LCR Honda pair Cal Crutchlow and Jack Miller both enjoyed excellent starts to the race and found themselves battling for the final podium spot. Unfortunately Miller would take out his British teammate at Vale on the 3rd lap, with both men forced to retire. Stefan Bradl (Aprilia Racing Team Gresini) also crashed out of the race with 8 laps to go.

Valentino Rossi
"I'm very happy and proud of this victory, it's a great feeling! I think that the last race on the wet that I won was ten years ago. This morning I woke up feeling good, but my team also did a great job and my bike was fantastic already from the first lap of the warm up. I felt great and got more feeling and positive things from the bike, so I knew I could be competitive in the race. I fought a lot with Marc, which was very difficult. I kept trying to break away but he stayed with me. I saw that Marc crashed on the mega screen and I didn't hear noise of his bike, so I already thought that maybe something had happened. After he crashed I slowed down, because I thought I had enough of an advantage but in reality Danilo wasn't so far, so I had to recover my concentration and start to push, because if I didn't he would catch me. This is my fourth victory of the season, so I'm very happy and it's important for the championship. Today I was very fast, I had great confidence with the bike and it's a fantastic victory at Silverstone, where I never won before, this is the first time!"