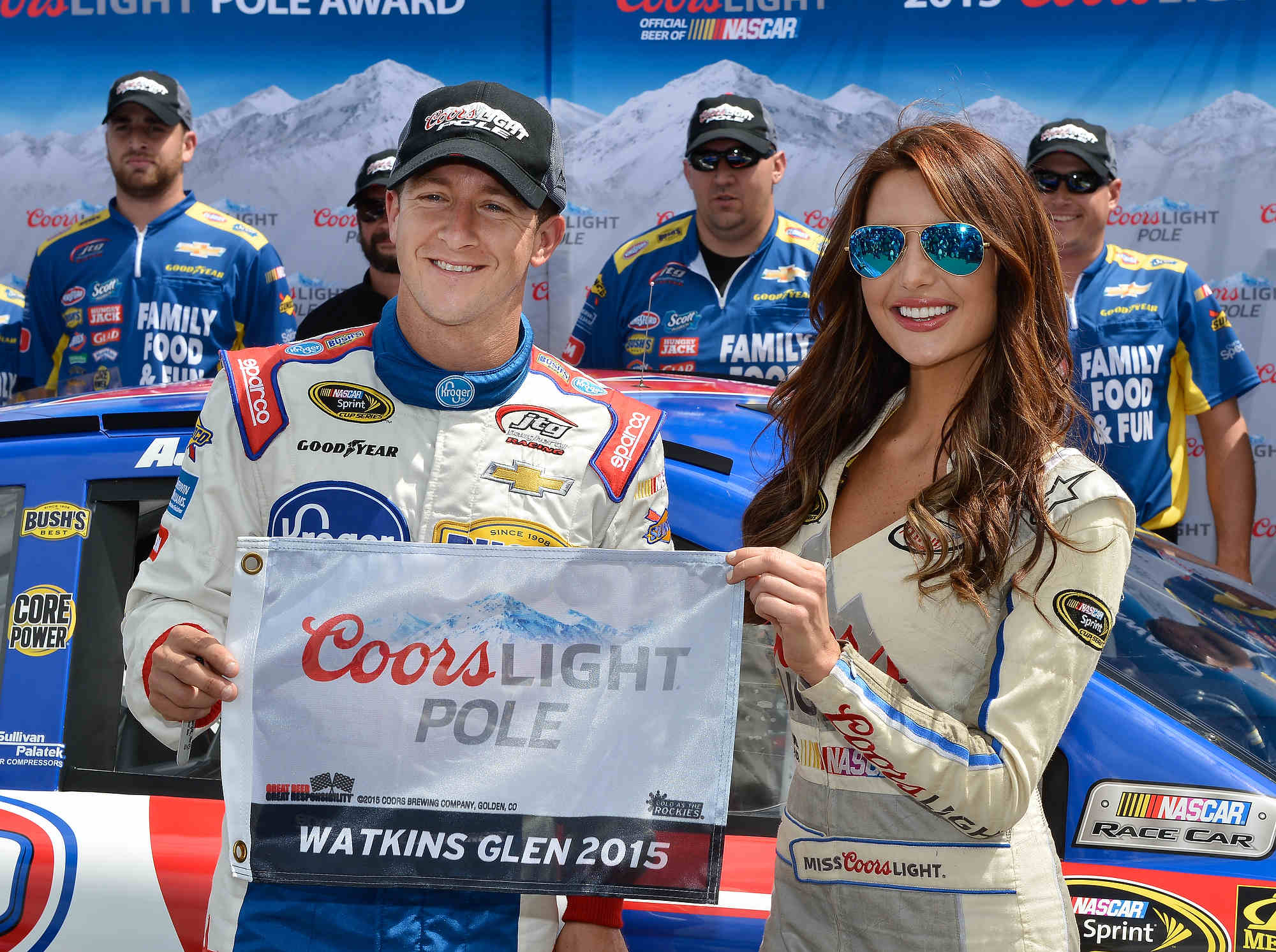 A.J. Allmendinger picked up his second pole at a road course this season on Saturday at Watkins Glen International.

The driver of the No. 47 car, who had a bad day of practice on Friday, topped the leaderboard after the first round and continued his success into the final 10-minute session of qualifying. Allmendinger won the 2014 edition of the race to secure a spot in the Chase.

Martin Truex Jr. used a strong run in the second round to earn a spot next to Allmendinger on the front row for Sunday's Cheez-It 355. Tony Stewart and Kevin Harvick will set up next to each other on the second row.

Outside of the regular big names we are used to seeing in the final round of qualifying, Austin Dillon and Justin Allgaier turned in a good set of runs to start 10th and 12th respectively.

If Allmendinger can replicate his success on Sunday, he could lock up a spot in the Chase with four races to go.

AFTER THAT DAY YOU HAD YESTERDAY, FULL OF FRUSTRATION, WHAT DOES IT MEAN TO NOW START ON THE POLE AT WATKINS GLEN?

“We can lead to Turn 1 at least. I’m just proud of all my guys; I was frustrated yesterday and I probably wasn’t helping. I was overdriving trying to get more than what we there and I didn’t do a good job yesterday. They saved me. They gave me a good race car. So, going into tomorrow, I feel happy with what we’ve got. But, we’ll see. It’s a tough race. This Kroger/Bush’s Beans Chevy is going to be fast and hopefully we’ll be reliving last year."

TRACK POSITION IS VALUABLE EVERYWHERE. BUT WHAT DOES IT MEAN TO BE STARTING FROM THE FRONT AS YOU HEAD TO TURN 1?

“It’s so critical around here. Everybody is so close. It’s tough to pass. You start beating and banging on each other. Your fenders get torn up here and you can’t have that. It’s very aerodynamic-dependent. It’s a good start. Strategy plays a lot in this race; fuel mileage and everything. I can’t thank everybody at ECR enough for giving me the horsepower. I don’t know if I’ll sleep any better tonight, or not; but I’ll be ready for tomorrow."

HOW MUCH PRESSURE IS THERE ON YOU THAT YOU GOT THE JOB DONE HERE LAST YEAR TO GET INTO THE CHASE, IN A LOT OF HIGH EXPECTATIONS HERE AT WATKINS GLEN THIS YEAR?

“There isn’t any more pressure than I put on myself. These guys deserve it. I want to lift them on my shoulders and carry them to Victory Lane. Last year was special and it just makes you want to do it more and more. But the outside row, there ain’t nothing there. It’s all inside here that I put the pressure on myself and I’m going to go try to make it happen. These guys deserve it."

YOU CAME UP JUST SHORT. WAS THERE ANY PLACE WHERE YOU COULD HAVE GOTTEN A LITTLE MORE OUT OF THE NO. 78?

“Well, I missed my marks a little bit in the Bus Stop there. I missed it by eight inches or a foot, just a tiny little bit. And we may have been close if I’d hit that right. But all in all, it was a great lap for our Furniture Row Chevy. I can’t thank all my guys enough. They’ve done a really nice job this weekend. We made some big gains yesterday. I felt good about the car after practice. And then you go to bed and you think about it all night and you think about hitting your marks and what it’s going to take to do everything right. So, I’m proud of what we did today and we’ve definitely got a really good car in race trim. I’m looking forward to racing here tomorrow."

WHAT IS KEY AT WATKINS GLEN? HOW DIFFERENT IS IT WHEN YOU COME TO A ROAD COURSE RACE?

“Well, the strategy is completely different. I think fuel mileage is always a big deal here. The strategy is you’ve got to be fast. You hope to stay out front all day. You’ve got to keep the car on the race track. You’ve got to take care of the transmission and the engine and the brakes; and hopefully have something at the end; and then be on the right pit strategy to be able to use it. So, it’s definitely a tough race. But this place has been good to me over the years. I really look forward to coming up here and am looking forward to a great day tomorrow."

TALK ABOUT THE CONGESTION DURING QUALIFYING. WAS IT DIFFERENT THAN IN YEARS PAST?

“We waited that first session, until the track was really clear because we got blocked twice at Sonoma. And that cost us a shot at making that Top 12. So, we played it safe this time. We waited. We were patient. And it worked out for us."

ON HIS QUALIFYING RUN:
“That was all I had. I’m very content with that. Three good weeks of qualifying that really makes me happy; to do it at three different tracks with three different packages. That is an awesome way to start the weekend for sure. I thought we had a decent day yesterday. Today is even better. Hopefully, we can get our race package a little bit better for tomorrow too."

HOW DOES FIFTH SETTLE WITH YOU?

“Yeah, not as good as we were hoping for. But based on yesterday, I feel like the car was really solid and we could get a little bit more out of it in some areas but that just didn’t happen. We ran just a little bit slower than we did yesterday and some other guys picked up. But still, fifth is a great starting position here at Watkins Glen. Our Axalta Chevrolet is really solid. We worked really hard on race set-up yesterday, so I’m hoping that this fifth position is close enough to the front that all that work will payoff for the race."

A LOT OF GUYS WERE TALKING ABOUT TRAFFIC IN THE FIRST ROUND. DID THAT BOTHER YOU AT ALL?

“No, some guys went out a little bit later than we did in that second round. And I don’t know if the track cooled down or what, but we had really clean laps both times. We worked really hard on trying to do that. There was a little confusion on whether we could go through the Bus Stop or not, but as it turned out, it was pretty solid for us. But, that first round, I could see it being very easy to get held up in traffic. There’s just so many cars and it’s such a long lap that you get hot, especially if you just go for one lap, which most guys in the Cup Series are, you shut it off and you’re just way under speed and then you have no place to get out of the way, which is why we wanted to roll through the Bus Stop on our cool down lap. But, luckily it worked out for us."

ARE YOU SHOCKED AT HOW TIGHT THE TOP 10 ARE ON TIMES?

“Yeah, we’re all road course ringers these days. It’s amazing how smart this garage is and how great these competitors are. It was a great qualifying session for the Lowe’s Chevrolet. Unfortunately I had to make two runs to get my rhythm right in that first session. It certainly didn’t help for the last session in making that third lap on the tires, but I just got a little greedy in the Bus Stop an gained some time up there. All in all it was decent. I race the car better than I qualify and we’re starting pretty close to the front."

WHEN YOU WAIT A LITTLE BIT IN THAT SECOND ROUND, IS THERE A LOT OF PRESSURE? YOU’VE GOT ONE LAP TO GET IT RIGHT, AND THAT’S IT:

“It doesn’t really weigh on you that much. The pressure, I think, that we all thought was trying to time when you leave pit road to make sure that you didn’t have a group of cars slowing down trying to get back to pit road in front of you. And we worked hard to get that right and make sure that I was coming up to speed as those guys were slowing down. That was really where all the pressure was; and of course hitting it right in the turns. That was the most pressure-packed thing."

ON WANTING TO WIN AT WATKINS GLEN:

‘I love road course racing. I grew up not doing the same thing, but a similar aspect of racing and I truly enjoy it. I wish that I had more victories in the road course column and I’d really love to get one here and knock one of those tracks off the list that I haven’t won at yet.

TALK ABOUT THAT FIRST RUN. YOUR CAR WAS REALLY GOOD, WASN’T IT?

“It was really good. Our Brandt Chevy was really good. This is probably by far the best road course car I’ve ever had. That means a lot to me and this team. Just being able to go out there and lay down a good lap in the first round; we had to do it on the second round, unfortunately, but still were able to run two really good runs in that round. We made an adjustment for the second round and unfortunately it just didn’t go our way and there was not enough time to run another one. But it was still a solid qualifying effort. It puts us in position for tomorrow’s race. I’m excited."

FOR A SMALL TEAM LIKE YOURS, WHAT DOES THIS DO FOR YOU MOMENTUM-WISE?

“Well, when you come to a race track and you feel good about it, you always run better. After qualifying, and you qualify well, you just seem to have that positive momentum going into the race. This is a race that it a little bit different. It’s a road course race, so it throws everybody off a little bit. If we can capitalize on this weekend, I feel like the momentum that will carry, just throughout the rest of the season even, will be huge. So, I’m really excited about where our team is headed."

“I was one of the first cars on the track. It seemed like most guys went quicker on their second runs. And then the No. 3 (Austin Dillon) car just got in my way in Turn 7. That corner, I don’t know if it’s more important than others, but it’s really loose on entry. So, you can’t necessarily move up and try to get on their outside. I don’t know. I’m really mad at him. I’m mad at the circumstances. But it’s just a product of this qualifying. Sometimes it works out for you, and sometimes it doesn’t."