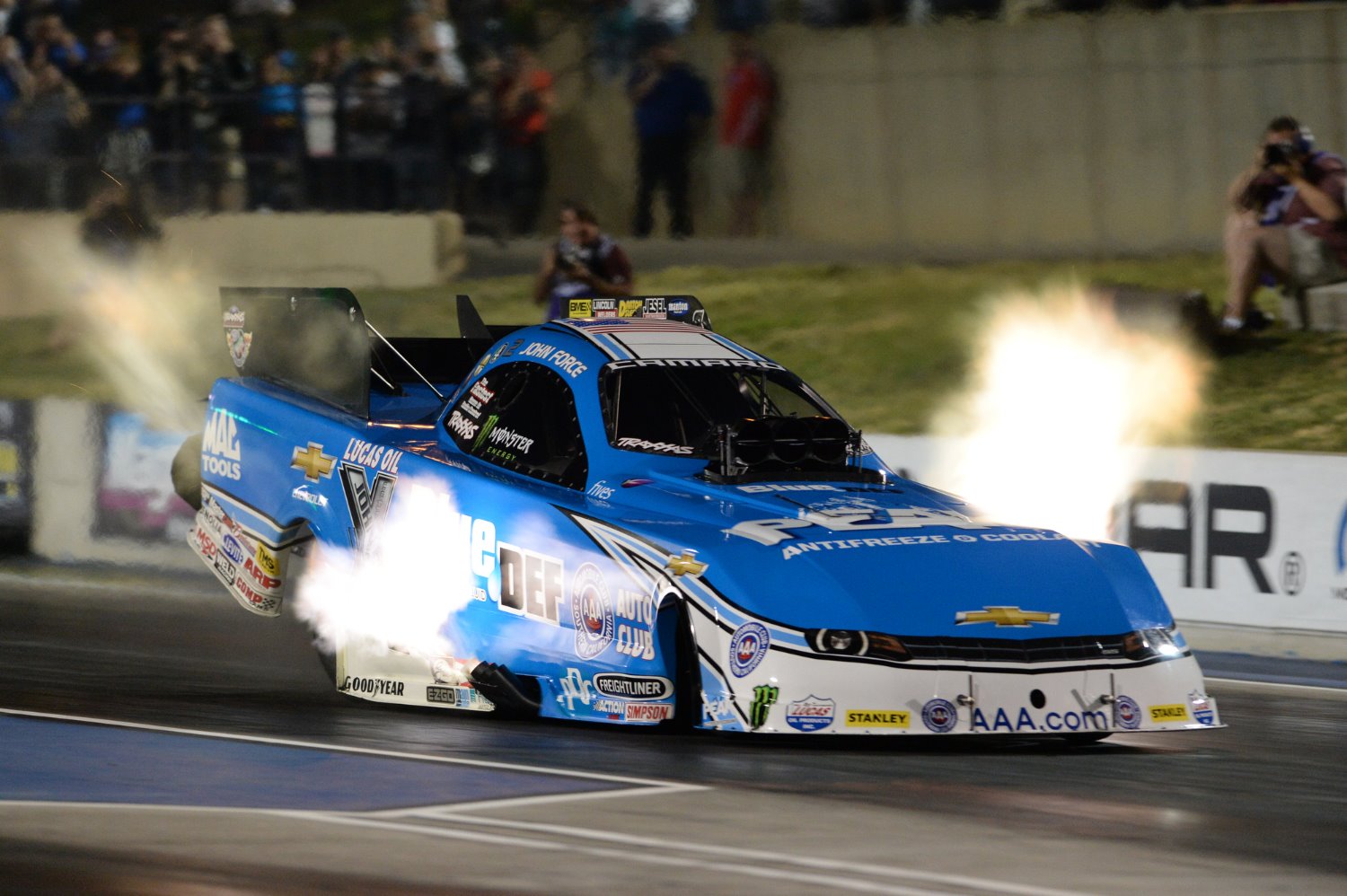 Larry Dixon (Top Fuel), Allen Johnson (Pro Stock) and Eddie Krawiec (Pro Stock Motorcycle) also were No. 1 qualifiers of their categories at the 14th of 24 events in the 2015 NHRA Mello Yello Drag Racing season and the first of three events on the NHRA Western Swing.

Force powered to a track record 4.015 at 318.09 to earn the top qualifying position for the second time this season. He was also strong during Saturday’s two sessions, running low elapsed time of the day during the final pass of the night. Force has two wins this season and will race against John Hale in the opening round of eliminations on Sunday.

“When you run good, you stay at the end of the qualifying line and you get better conditions," Force said of his final run of the night. “We didn’t know what we would run but we said, ‘This is not the conditions we’ll run tomorrow, but let’s see what we can do.’ I’m starting to build my brain trust again and I’m pretty excited about it. It’ll build your confidence but if you get jacked up around that tomorrow, you could get picked off by anybody."

In Top Fuel, Dixon recorded a track record 3.791 at 326.63 on Friday night and that run held to earn him the No. 1 spot for the first time since 2011 and 52nd time of his career. Dixon, who has finished runner-up five times this season, is hoping to earn his first win of 2015 and third of his career at Bandimere. He will meet Scott Palmer in the first round.

“It was good information for us so we know how to better adjust the car for tomorrow’s conditions," said Dixon, a three-time world champ. “Hopefully we can have some full pulls tomorrow. Bob Vandergriff has given us a great car with great equipment and great people to work on it. That’s really what it takes to win a race, qualify or contend for a championship. This was my crew chief, Mike Guger’s first No. 1 qualifier as a crew chief, so I’m really happy for him to be a part of it."

Defending and eight-time world champ Tony Schumacher qualified second with a 3.796 at 325.37, while Brittany Force, Steve Torrence and Doug Kalitta rounded out the top five.

Allen Johnson raced to his 37th career No. 1 qualifier in Pro Stock and first of the 2015 season with a track record 6.877 at 200.29 mph. Johnson, who has won six of the last eight races at Denver, is looking for his fourth consecutive win at the track. He will have a first round bye on Sunday and will meet the winner of No. 8 Bo Butner and No. 9 Drew Skillman in the second round.

“We were really gearing up for raceday tomorrow all day," said Johnson, the 2012 Pro Stock world champ. “The first run we made a decent run and were lowest of the round by a little bit. Competition is getting tougher, getting closer and it’s going to be knockdown drag out tomorrow. Coming in here and running like we’ve run is what we set out to do."

In Pro Stock Motorcycle, current points leader Krawiec rode to his first No. 1 qualifier of the 2015 season with a track record 7.169 at 186.10 achieved on Friday. Krawiec, a two-time winner of this event, now has 24 career No. 1 qualifiers and is chasing his first win of the season. He will face Chaz Kennedy in the first round.

“It was obviously more of a tuning session for us," said Krawiec, a three time world champion. “I didn’t think someone was going to the No. 1 spot and we weren’t really concerned with the No. 1 spot. We were concerned with the race-day tune-up. That’s what we’ve struggled with. We saw a direction in which we want to go tomorrow so I’m pretty confident. I’ve got a great motorcycle. As long as it can get me four very fast, consistent laps, I’ m good with that."

Hector Arana Jr., Andrew Hines, Hector Arana and Jim Underdahl made up the rest of the top five qualifiers.

JOHN FORCE, JOHN FORCE RACING, BLUE DEF/PEAK CHEVROLET CAMARO SS, NO. 1 QUALIFIER: THIS IS YOUR SECOND NO. 1 QUALIFYING RUN OF THE SEASON AND 154TH OF YOUR CAREER. TALK ABOUT THAT LAST RUN OUT THERE, YOU ENDED UP HAVING THE LOW OF THE DAY “Well, when you run good, you stay at the end of the pack and you get in better conditions. We also saw what our other cars could do. Robert ran an .08 and Courtney kind of led the way in a lane that was oiled. She ran that .12 or .13. We didn’t know, but it kept getting cooler and we said that this would not be the conditions we would run in tomorrow, not even in the evening if we make it to the final, but let’s see what it will do. And Jon Schaffer said to me, the kid is very saavy, ‘don’t want to smoke the tires, let’s make it go A to B,’. And then it ran an .05, so the kid is doing really good. He, Mike Neff, and the whole team are doing great. I am starting to build my brain trust again and getting pretty excited about it."

HOW DO YOU FEEL YOUR TEAM HAS BEEN PERFORMING THIS WEEKEND. AS YOU SAID, YOU HAVE BEEN WORKING ON DIFFERENT STUFF: “Well, a lot of it is mental. To come up here on this mountain when you have no data, and we have no data….in our clutch program, our motor program, and a lot of stuff that we are kind of hit and miss on. Then you face the altitude up here at Mile High. We thought if any track would throw us a curve, this would be it. But boy, Mike Neff rose to the plate. Todd Smith and the dragster boys are in the hunt, so yes, it will build your confidence but you know if you get jacked up around that tomorrow you could get picked off by anybody. A guy tried to interview me down below, but I just thanked the fans because it is just unbelievable to see the track pack it Friday night and pack it Saturday night. That is pretty impressive. So to NHRA and Bandimere did their job. But I am excited because my sponsors that are out there like Chevrolet, like Blue Def, Traxxis, and Monster Energy who came on board – all these people know I have a game plan. I have always dreamed and I have never had the money of Penske, never had the money of Hendrick, and don’t want to. But I want to be that caliber of a race team that IndyCar and NASCAR have. I am really proud of that."