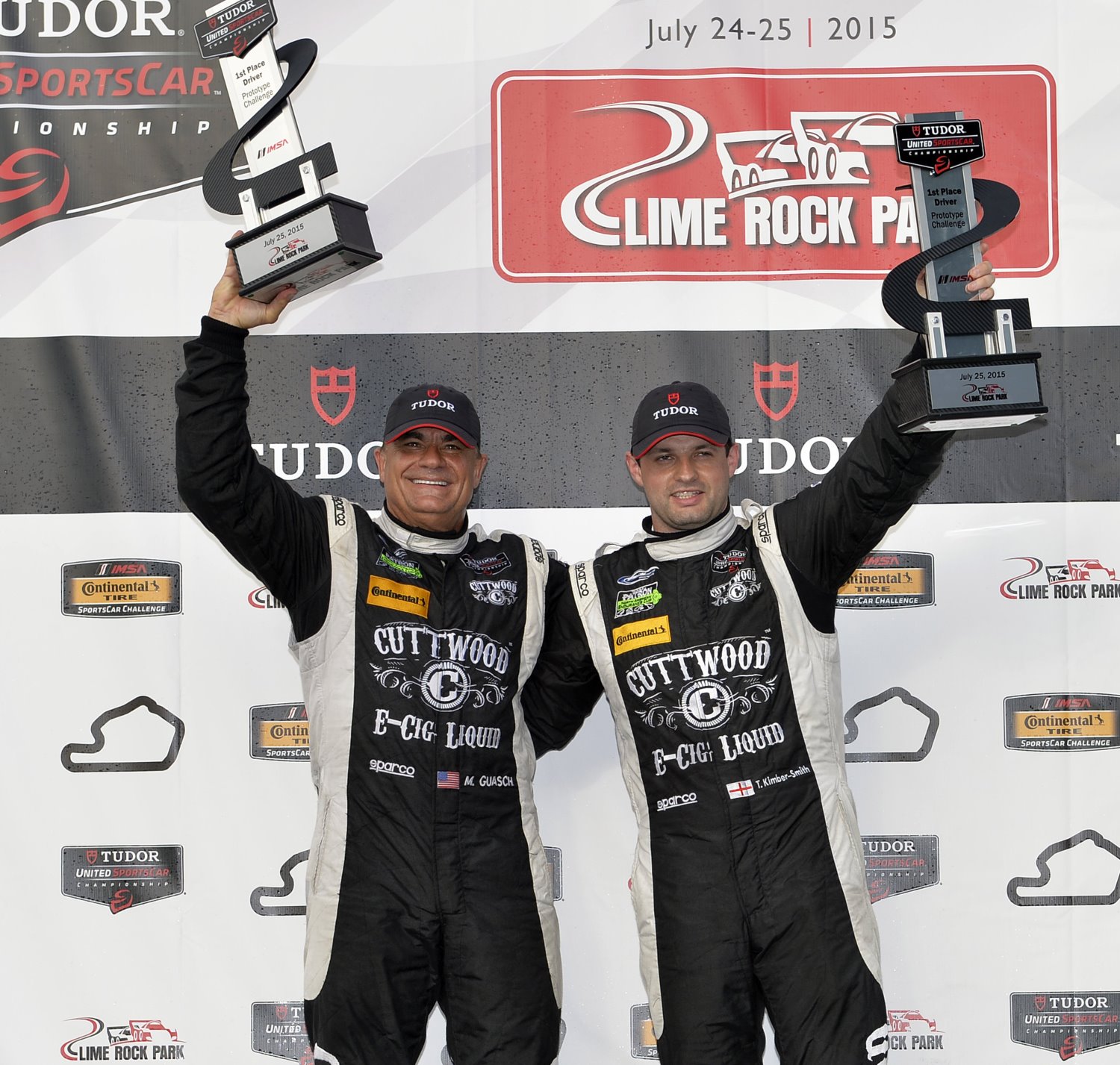 LIME ROCK, Connecticut — For a while, it appeared no one wanted to win Saturday's TUDOR United SportsCar Championship race at Lime Rock Park, but the No. 52 PR1/Mathiasen Cuttwood Prototype Challenge car of Tom Kimber-Smith and Mike Guasch finally took the checkered flag in the two-hour, 40-minute Northeast Grand Prix.

In the GT Daytona (GTD) class, the No. 97 Turner Motorsport BMZ Z4 of Dane Cameron and Michael Marsal took the win, but it was not without drama, on and off the track.

Early on, it appeared the race would be a runaway victory for the fastest qualifier in the Prototype Challenge (PC) class, Stephen Simpson in the No. 85 JDC/Miller Chevrolet-powered ORECA, who put nearly a full lap on the entire field in the first hour of the two-hour, 40-minute race before making a quick pit stop.

[adinserter name="GOOGLE AD"]He returned to the track and almost immediately, the engine lost power and wouldn't restart. After a tow to the pits, the crew found it was just a circuit breaker, which they reset and sent Simpson back out. But the delay, an "electrical gremlin," Simpson said, cost him and teammate Mikhail Goikhberg so much time that they finished sixth.

A turning point for both classes came just past the halfway point. Conor Daly, driving the No. 38 Performance Tech PC entry, attempted to pass Christopher Haase in the GT Daytona No. 48 Paul Miller Racing Audi R8 LMS in the downhill turn leading to the front straight. They made contact, and both went hard into the tire wall.

Daly was leading the PC class and the race overall, and Haase was leading the GTD class, so one misjudged corner — both drivers blamed the other for the crash — and both leaders were suddenly out of the race.

And even that winning GTD No. 97 Turner Motorsport BMW Z4 had a difficult trip to the winner's circle: In Friday practice, Michael Marsal piled the car into the tire wall, causing so much damage that it seemed likely there wouldn't be enough time to repair the car. But the Turner Motorsport team located a body shop 35 miles away that had a frame straightening machine, and after hours working on the frame, the mechanics finally got the car back together at 3 a.m. "If you open the trunk and look in, it still isn't pretty under there," Marsal said, but the car got the job done.

Barely, as it turned out. Marsal's partner, Dane Cameron, who won the championship with the team in 2014, took the closing shift behind the wheel and nursed the car along for a stunning 94 laps from the last pit stop to the end, saving tires and fuel to take a 3.505-second win over Jeroen Bleekemolen in the No. 33 ViperExchange.com Dodge Viper SRT GT3-R, which he shares with team owner Ben Keating. Third in GTD was Kuno Wittmer, in the No. 007 TRG-AMR Aston Martin V12 Vantage he shares with Christina Nielsen.

In the series points, Haase and No. 48 Audi co-driver Dion von Moltke lead GTD, while Colin Braun and Jon Bennett in the No. 54 CORE autosport entry lead in PC.

Despite winning early in the season, "We've had a lot of bad luck this year," Kimber-Smith said. "Going into this race we knew we needed to win to get back into the championship hunt. Today, everything seemed to go our way."

"That's what it's all about," said Guasch. "Who has the least amount of bad luck."

In GTD, there was a lot on the line for Marsal, driver of the winning No. 97 BMW. This is his home track, "and we have probably 50 people here, including my mom and dad." And co-driver Dane Cameron flew in from California to race.

"When it looked like Friday that we wouldn't be able to get the car fixed in time — it was tough." But they did fix it, and the fuel-saving pit strategy won the race for them, though the cobbled-together car was certainly fast — Cameron had the quickest lap of the race in GTD, with a 53.695-second lap halfway through the race.

[adinserter name="GOOGLE AD"]Lime Rock Park, at 1.474 miles, is the shortest road course on the TUDOR Championship schedule, and the Prototype and GT Le Mans classes got the weekend off.

All four classes will be back in two weeks for the Continental Tire Road Race Showcase at Road America in Elkhart Lake, Wisconsin. At four miles, Road America is the longest track on the schedule. That race will air live on FOX Sports 1 August 9 at 3 p.m. ET.

Talk about the highs and lows of automobile racing — the Multimatic Motorsports team of Scott Maxwell and Billy Johnson have seen it, all wrapped up into two races.

The last race, at Canadian Tire Motorsport Park, which is the Canada-based Multimatic team's home track, Maxwell was behind the wheel and crashed hard, essentially totaling their new Ford Shelby Mustang GT350R-C.

But in today's race, the Northeast Grand Prix at the 1.5-mile Lime Rock Park, Maxwell and Johnson took the overall win and the Grand Sport class victory in the two-hour Continental Tire SportsCar Challenge race, crossing the finish line 3.093 seconds ahead of Jade Buford and Austin Cindric, driving a Multimatic team Shelby Mustang.

Buford and Cindric won at the Canadian Tire Motorsport Park, giving Multimatic two in a row.

"It's been an up and down season for Billy and me," Maxwell said. Today's race wasn't easy, one reason being the less powerful Street Tuner cars are easier on tires than the Grand Sport cars, "and within 20 or 30 minutes, they are as fast or faster than we are on some of the corners," Maxwell said. Consequently, passing required patience. "I just tried to avoid conflict, and give Billy a good car" to finish the race in.

Third was Brad Jaeger and BJ Zacharias in the No. 14 Nissan 370Z, and fourth was Robin Liddell and Andrew Davis in the No. 6 Chevrolet Camaro Z/28.R.

In the Street Tuner class, it was another win for a Mazda MX-5, this time the No. 5 car driven by Chad McCumbee, who qualified the car on the pole, and Stevan McAleer. The win also put the team, CJ Wilson Racing, owned by the major league baseball pitcher, in the Street Tuner points lead.

"With two wins this year," McAleer said, "we have a lot of momentum. I hope we can take it to Road America," which is the next race on the Continental Tire schedule.

Second was Eric Foss and Jeff Mosing in the No. 56 Porsche Cayman, followed by Spencer Pumpelly and Luis Rodriguez Jr., in another Porsche Cayman. That duo won their class at the last race at CTMP. Twelve cars entered in the GS class, and 29 in the ST class, with 39 cars starting the race.

SPEAKING OF ROAD AMERICA: IMSA, the sanctioning body that governs the TUDOR United SportsCar Championship, will hold its 2015 IMSA State of the Series conference at the track on August 8 for teams, drivers, crews, sponsors, partners and the media. They are expected to announce the TUDOR Championship race schedule for 2016.

[adinserter name="GOOGLE AD"]KUNO WITTMER JOINS ASTON: Canadian race car driver Kuno Wittmer, who won the drivers' championship in 2014 in the GT Le Mans class, thought he had a solid ride with the Viper team in 2015, but Dodge pulled the plug on the program a week after winning the championship, leaving Wittmer out of a job.

He has driven for multiple teams this year, but has landed a regular job, joining Christina Nielsen in the TRG-AMR No. 007 GT Daytona Aston Martin V12 Vantage, on the team headed by veteran racer Kevin Buckler.

Nielsen took the first stint at Lime Rock today, bringing the car to the pits in first place. Wittmer took over, and scored a solid third place finish.

"I am very pleased to be joining the TRG-AMR squad in their Aston Martin GTD car, and also blessed to be back in a GT car in the TUDOR United SportsCar Championship," Wittmer said. "They have shown great pace over the year and the team is always among the sharpest in the paddock."