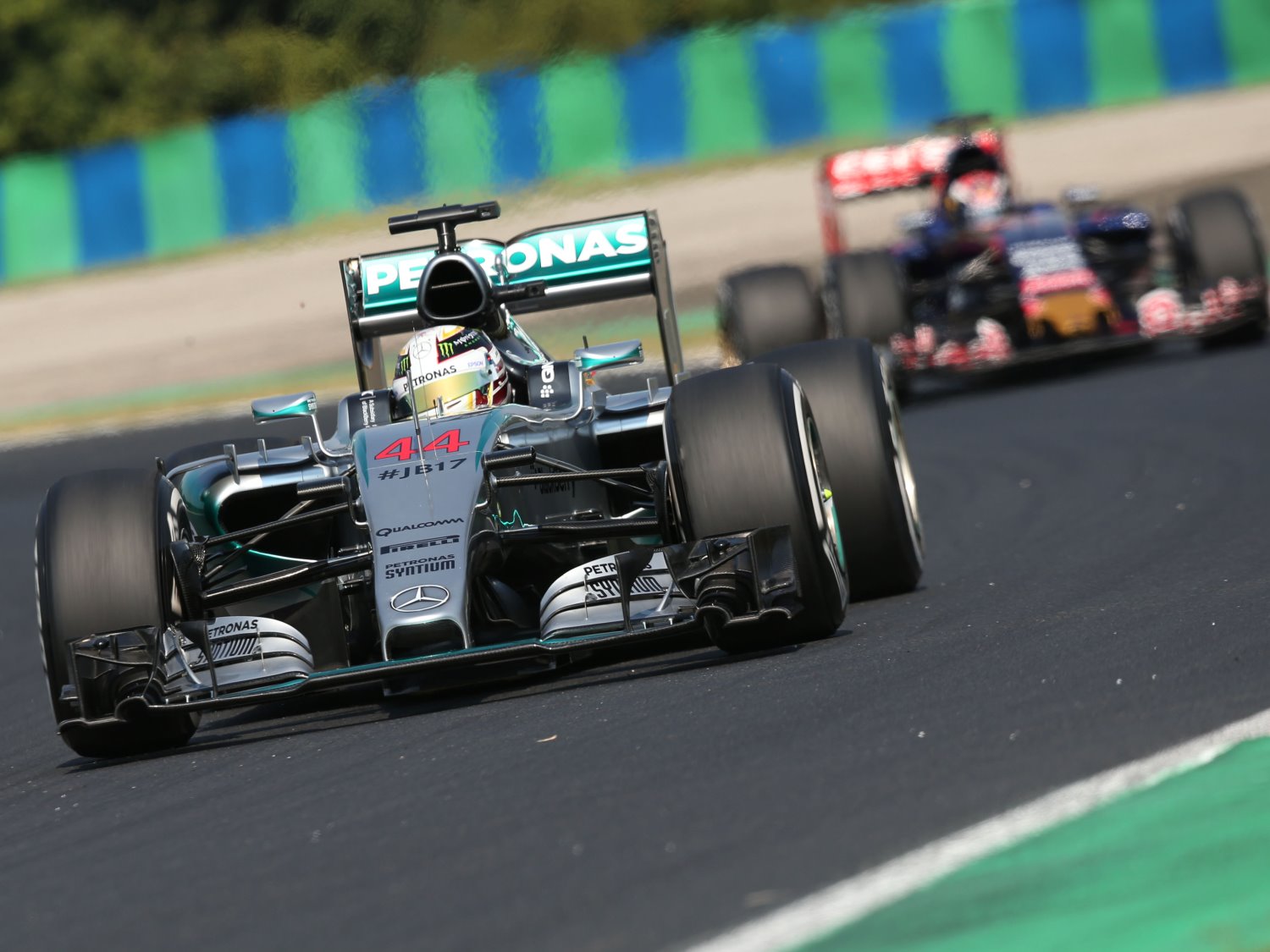 For the 9th time in 10 races Lewis Hamilton beat Mercedes teammate Nico Rosberg to claim pole for the Hungarian GP which will be a boring 1-2 Mercedes parade from start to finish.

Rosberg complained about the handling of his car but maybe, just maybe, it is the driver's ability.

Ferrari's Sebastian Vettel claimed third on the grid, but he is 7/10ths per lap slower than the dominant Mercedes. He is the best of the rest and clearly anyone not in a Mercedes is out to lunch as technology, not driver skill, dominates F1.

The second Ferrari of Kimi Raikkonen finished up 0.246s behind Red Bull’s Daniel Ricciardo in fifth, while Valtteri Bottas was fastest of the two Williams drivers in sixth.

Lewis Hamilton
It's been a good weekend so far. I've generally had really good experiences here. I love the city, love the weather, love the track. It's such a great track to drive – grippy in these conditions and you really can throw the car around like a go-kart. It's great to be on pole – but me and Nico wouldn't be here if it wasn't for the fantastic work done by the team to give us this car. A big thanks to all of them. The work isn't done on a Saturday, of course. It's been a great start – in fact I can't remember having such a strong performance all the way through. But anything can happen on that run down to turn one and through the race. I'm feeling confident in myself, confident in the car and confident in Mercedes, so let's see how it goes.

Nico Rosberg
Congrats to Lewis first of all on a great pole lap. Unfortunately for me, something went wrong in qualifying which I can't quite explain at the moment. In P3 I sorted out the problems from Friday and had a great feeling in the car. But then, as early as the first lap in Q1, I had to feed back to the pits that I had heavy understeer from the car. I tried to change some of the electronic setup but it didn't really work out. The positive could be that this setup might help me a bit more in the race, as understeering could keep the rear tires more alive, so we will see. Even if IÂ´m not happy about my performance today, there is still a lot to play for tomorrow. I need a good start – but there will be some other chances later in the race so I will go for it!

Toto Wolff, Head of Mercedes-Benz Motorsport
That was a bit of a mixed qualifying session for us. Lewis did a pretty special lap this afternoon – there could even have been a bit more to come perhaps but it was a commanding pole position. For Nico, it was trickier. We gave him a tough car to drive with the understeer, then managed to dial it out with some changes to the tire pressures – but it was coming and going. It was an odd situation so he did a good job in the circumstances to be P2. The gaps seem to have closed up a bit in the heat – but we expect cooler temperatures tomorrow, which can hopefully work in our favor. However, we will not underestimate our rivals. Our advantage is a fragile thing and we always need to work to get every detail spot on. Ferrari and Red Bull are on our tail and ready to pounce on any mistakes.

Paddy Lowe, Executive Director (Technical)
A fantastic result to get a front row lockout here in Hungary. It felt like a difficult session for a few reasons. Getting through Q1 on the prime tire was a very close call and, in the end, we decided not to risk it. Then, the red flags in Q2 meant we had to use an extra set of options when others didn't. This made it very satisfying to secure the front row on the first run with scrubbed tires in Q3, thereby taking some of the pressure off Lewis and Nico for the second runs. It was a superb lap from Lewis to claim pole – he has been faultless all weekend so far and that was another impressive performance. For Nico, a couple of mistakes on his final run meant that he lost a fair chunk of time. However, we must apologize to him as we only discovered last night that there had been a configuration error on his car throughout Friday which hasn't given him an easy ride thus far. We're looking forward to tomorrow and hopefully another great competition between our drivers and the other teams, some of whom look strong here this weekend.