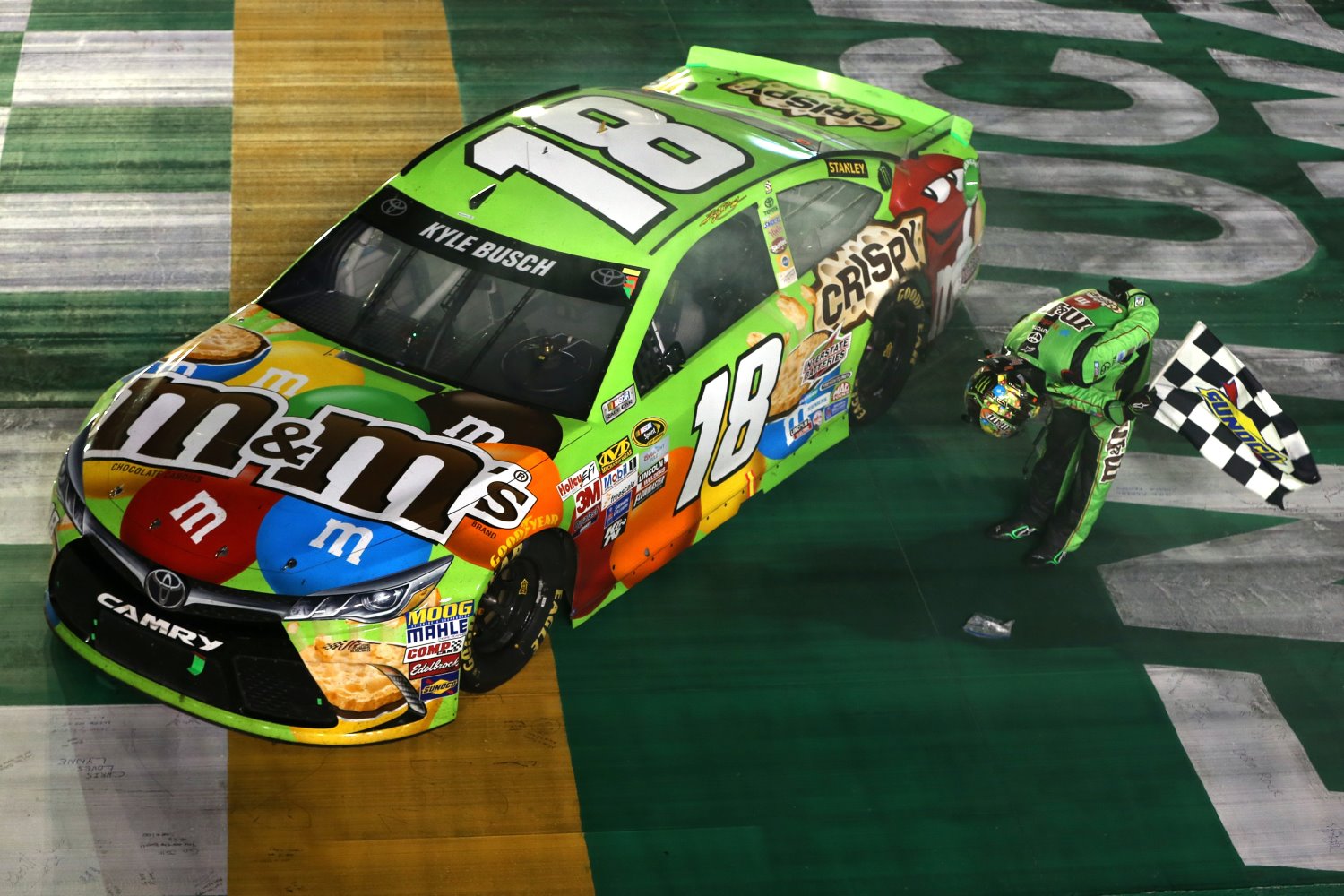 Kyle Busch continued his hard charge toward the top 30 in points in search of a Chase for the NASCAR Sprint Cup berth, winning a thrilling Quaker State 400 race at Kentucky Speedway on Saturday night.

Busch, who won at Sonoma Raceway two weeks ago after missing the season's first 11 races with injuries sustained at Daytona International Speedway in the XFINITY Series opener, led a race-high 163 laps en route to his second victory in five races at the track.

Unofficially, Busch is now 35th in the standings and 87 points behind 30th-place Cole Whitt. With two wins, Busch now needs to be in the top 30 in the points standings after the regular-season finale at Richmond to qualify for the postseason.

Jeff Gordon finished seventh, falling short of picking up his first win at Kentucky in his last start at the 1.5-mile speedway in his final full-time season.

Dale Earnhardt Jr. and Danica Patrick were involved in a mid-race mix-up that resulted in Patrick being rear-ended and spun out by Earnhardt's No. 88, leading to an exchange on pit road.

How fun was it to race for the win at Kentucky?

“It was fun, certainly when you have a great race car like that, it makes it nothing but fun. Adam Stevens (crew chief) and these guys gave me a great M&M’s Crispy Toyota Camry, it was really, really awesome. We could move around the race track there at the beginning and middle part of the race. I kind of mired myself to the bottom-middle and I didn’t really want to move from there, but towards the end I knew I needed to move around and just try to find some other options. That’s what worked for me. He (Joey Logano) got away from me and I was nervous I wasn’t going to be able to get back to him, but I knew to just try something different to go get him and try something different. Man that really worked for us. Again, I can’t thank Adam Stevens enough. I can’t thank M&M’s, Interstate Batteries, Monster Energy, Toyota, TRD (Toyota Racing Development) and the fans of course for all their support coming to Kentucky Speedway and Sprint as well for what they do for our sport. Fun night for us. I enjoyed the race, I really did. I guess I did more so than everybody else because we are in victory lane. I just thought you had options and this is one of my better tracks so I’m not going to lie, we excelled a little better."

“All the drivers were kind of striving for this. I felt like it was a positive thing when I was chasing Joey (Logano) down. Right when I got to him, he moved up and tried to block my lane. With the old package you get stalled out, and get stuck behind the guy. I just moved down and went a little bit lower and got my Camry to stick and was able to power through and get back by him. We swapped the lead back and forth a couple times. I thought it was pretty good racing. You don’t want to spend too much time racing around and putting on too good of a show for the fans to take yourself out of a win. I thought that was a really good race, at least it wasn’t a guy who checked out on the last run and you didn’t see a pass for the lead coming down the final stretch."

What type of statement does this make about you and your race team?

“A pretty good one. That was awesome, I can’t say enough about Adam Stevens (crew chief) and this whole M&M’s Crispy team. They did a phenomenal job for me preparing a great race car. This Toyota Camry was fast. I can’t say enough about them and Interstate Batteries, Sprint, Monster Energy and the fans. It’s pretty cool to come here to Kentucky, one of my best places and to score a win. You have to be able to score that win to be here in victory lane. This team did it for me – awesome stops all day, getting us and keeping us up front and just a great race car to move all around the race track. What a blast! I know I won, but so far so good, I like the new aero package obviously. It just seemed like you weren’t stuck. (Joey) Logano kind of moved up and blocked my lane and with the old package you kind of just would get stalled out and you would get stuck behind him and this one here I could kind of move around and went back to the bottom and made a move on him to pass him low. Great racing there with about 10 (laps) to go I guess, that was a lot of fun with Joey. This team and M&M’s, everybody that does such a great job – Adam Stevens, we were right there on that Crispy Edge. If you haven’t checked it out, go to YouTube and M&M’s Chocolate, their page and check out our ‘Days of Thunder’ film."

How focused are you on the points you need to make the Chase?

“That right there is what we have to do. Just to score as many points as we possibly can and score those wins, that’s what’s going to get us where we need to be. We led the most laps and we won the race so that’s all you can score. We’ll just continue to push on and drive and try to strive through our deficit and get ourselves in position to be in the top-30."

Are you constantly surprised by what Kyle Busch can do in a race car?

“There is just no quit in Kyle Busch – he’s proven that time and time again. When the pressure’s on is when he’s at his best and he showed it again here tonight."

How nervous were you with all four cars racing up front?

“I think I’m the most nervous when there’s two of our cars up there and today we had four of them up there and I was scared to death, let me just put it that way."

What does this second win of the season say about Kyle Busch and his recovery?

“I have to tell you, for everybody out there, I have such great respect for what he’s (Kyle Busch) done. This is a great sports story – to be hurt that bad at Daytona and come back in four months, win on a road race – you know how hard that is – and then come back here and win again. Just really proud of him and the whole M&M’s team, everybody has done a great job there – Adam (Stevens, crew chief) and everybody. We’re so excited for the whole group."