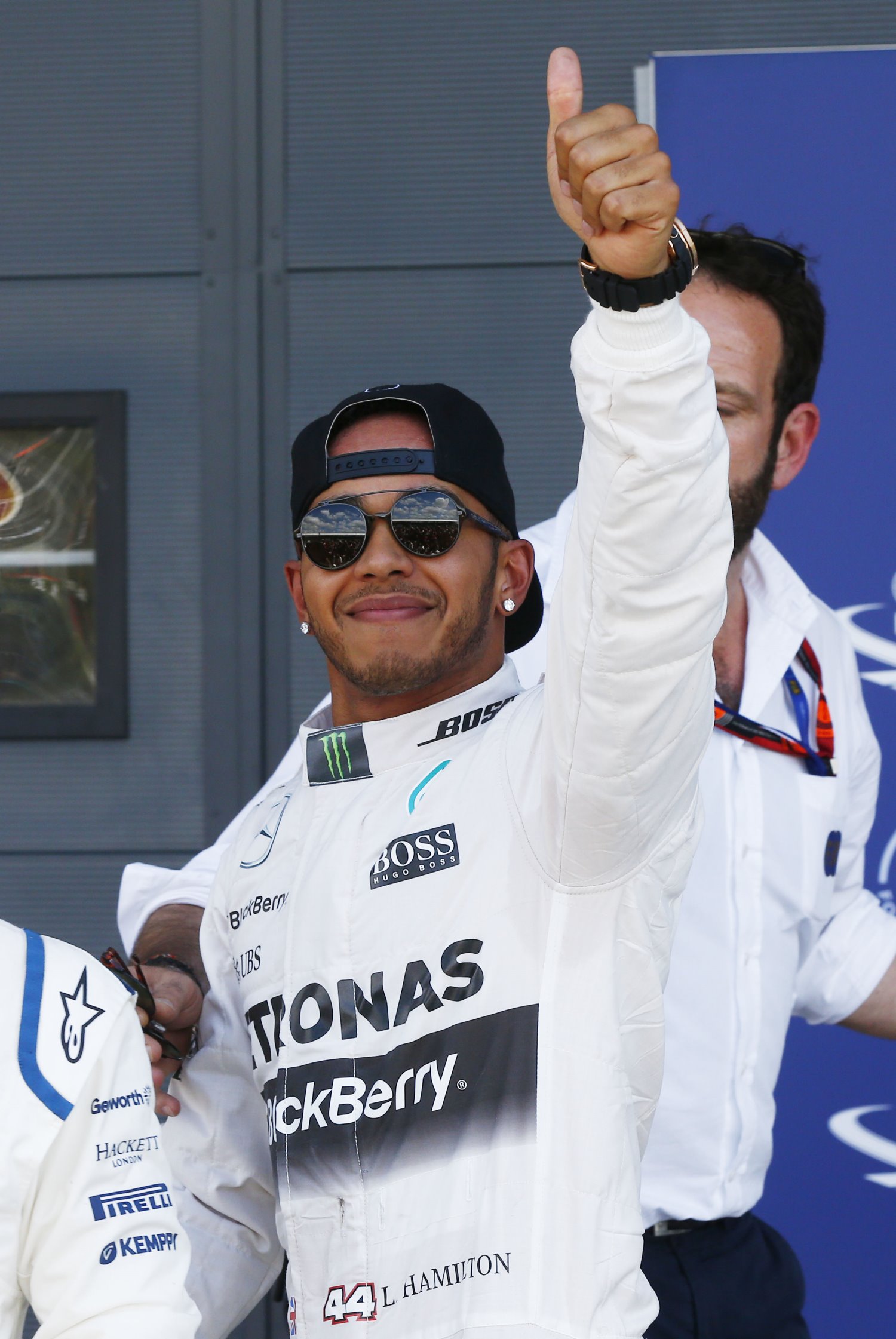 Sandbagging Lewis Hamilton waited to go fast when it counted, won the pole position for the British GP over his Mercedes teammate Nico Rosberg. The rest of the teams are out to lunch, though Felipe Massa and Valtteri Bottas did manage third and fourth fastest time using Mercedes power in their Williams chassis giving Mercedes engines 1-2-3-4 grid lockout.

Kimi Raikkonen and Sebastian Vettel were fifth and sixth for Ferrari. Vettel said "I was pretty bad and held up by Massa on the out lap so the preparation was pretty bad. Then the car was sliding around"

It was the 20th consecutive pole for Mercedes, such is their domination of the sport. You either have Mercedes engines or you are nowhere.

Lewis Hamilton is now third on the all-time list of pole winners with 46 poles, one more than Sebastian Vettel, however, it is rather meaningless since any driver can win pole with the Mercedes and many of his 46 have come driving for Mercedes.

Lewis Hamilton
It's a special day and an extra special feeling getting pole on my home turf in front of all the fantastic fans that have come out here to Silverstone. They've been absolutely incredible, so a big thank you to everyone for the support. It hasn't been a completely smooth weekend – I'd not quite managed to find the right balance throughout the practice sessions. Although it's my favorite part of the track, it's been tough through the middle sector in particular with the wind. But luckily it all came together in qualifying. That was such a buzz – having the car working underneath me and seeing all the flags waving out of the corner of my eye as I came round the lap. I've got my brother here too and I've seen so many messages on banners in the crowd and on social media building up to today. I can't thank everyone enough for their support. I'm very, very happy with that one!

[adinserter name="GOOGLE AD"]Nico Rosberg
My first run in Q3 was quick and I thought I had nailed it but, when I had a look on my dash, Lewis was just one tenth quicker which was very annoying! In the second run I was set to improve – but something felt wrong with my left front tire. I had no grip, so we need to look into that later. I've had a tricky weekend so far with a few car problems – but it's all still possible tomorrow as we have seen in the last race. Another big thanks to the boys in the garage. They had a lot of work to do again in the morning session to get my car back out after the issue. Also, it's really great to race here in front of such massive crowds. The people clearly love racing and even cheer on the non-British drivers which is very cool to see, so a big hand for them too.

Toto Wolff, Head of Mercedes-Benz Motorsport
What a fantastic qualifying session and such a close battle between the boys. In the end, Lewis mastered the windy conditions and put everything together on that first run in Q3 – and his time was good enough for pole. You could see the fans cheering every single time he went past the grandstands and a lap like that deserved pole position. But we can't overlook Nico, just one tenth behind. Like nearly every driver, he couldn't improve on the final run and reported a loss of grip from his tires. It seemed like the conditions shifted and made it tricky out there. The advantage has been swinging back and forth between the drivers all weekend and everything's open for tomorrow. We have got the two Williams behind us and they had some strong pace in practice, so we cannot get complacent at any point. It's all about getting every detail right if we want to convert the front row into podium finishes.

Paddy Lowe, Executive Director (Technical)
That was a fantastic competition! It was very tense and exciting between the drivers; I think the whole crowd has been waiting all weekend to see how the contest plays out between Lewis and Nico. So far, it has been back and forth between the two of them, with Nico quicker one moment, then Lewis the next. Within the team, we had no idea who would end up on top. They were two great laps from the drivers in tricky conditions and a great performance from the team to get the cars into a good position with the balance for the final runs. Congratulations to Lewis and Nico – and now we look forward to the main event and hope we will put on a good show for the fans.

Felipe Massa
It was a fantastic day for us at our home Grand Prix and it's great to have us P3 and P4. I enjoyed fighting closely with Valtteri and exchanging lap times. The wind into Copse was really strong and that affected the balance of the car, so I made sure to be cautious and not to waste a lap by running wide. It's very important for us to show that we have the pace to get both cars ahead of everyone except from Mercedes. Tomorrow won't be easy but we are ready for it and it will be an exciting race.

Valtteri Bottas
We knew how much we could improve today but we were still a little bit surprised it was so much and that's a good thing because tomorrow could be a very good race for us. Of course you always want to be in front of your teammate but we had a good battle and Felipe improved a bit more at the end. It's great to be in front of our closest Championship rivals with both of our cars. That is a really good starting point and we now have the upper hand for the podium fight.

Romain Grosjean
I think that we had a decent enough qualifying session today and did a very good job with the car as it works here. It felt okay in Q1 on the option tires, but we seemed to get a lot of understeer for Q2 which didn’t help. The race will be long tomorrow but with some good tire management we will see what we can achieve. It isn’t the easiest track to make overtakes but as always we will push to achieve the best possible.

Pastor Maldonado
Of course, I’m not happy with my position on the grid but we’ve seen before that we are better in the races than in qualifying, so we hope that is the case for Silverstone. I think that we still struggle with the harder tire compounds and certainly I was not happy with the balance of the car this afternoon. The race is long and we’re working on getting the best pace possible.