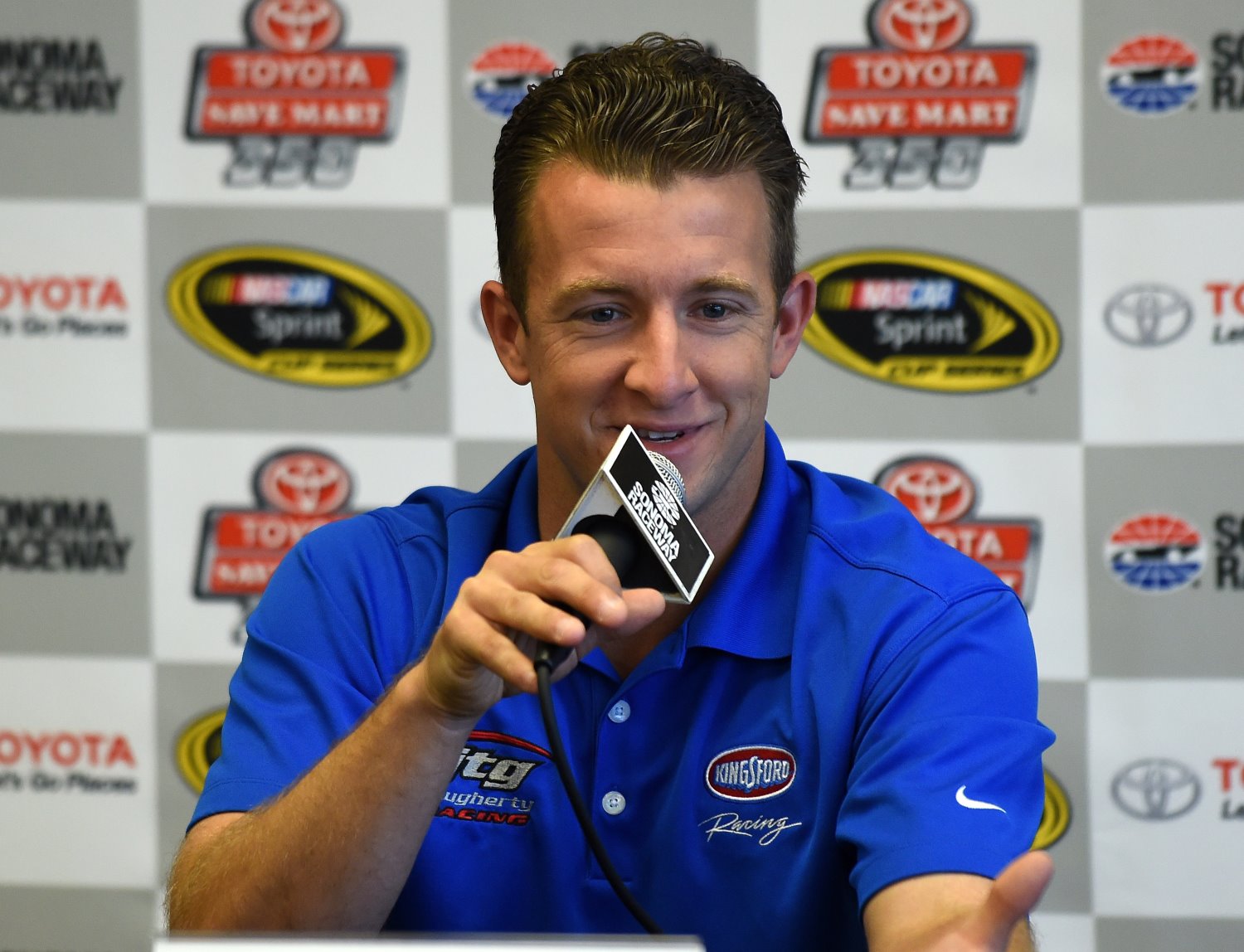 AJ Allmendinger earned the Coors Light Pole Award for the No. 47 JTG Daugherty Racing Chevrolet on Saturday at Sonoma Raceway. Allmendinger, who posted a best speed of 96.310 mph, will lead the field for Sunday's Toyota/Save Mart 350.

Matt Kenseth's No. 20 Joe Gibbs Racing Toyota rounded out the top three with a fastest lap of 96.001 mph.

Kyle Larson finished qualifying in the fourth spot. Larson topped round one of qualifying with a track-record lap of 96.568 mph. The record was previously set by teammate Jamie McMurray (96.350 mph) last year. McMurray did not advance to the second round of qualifying as he finished in the 18th position during the first round.

Rounding out the top five was Sonoma's most successful driver, Jeff Gordon (95.905 mph). The No. 24 Chevrolet driver will race at Sonoma Raceway for the last time as a full-time NASCAR Sprint Cup Series competitor.

The red flag was brought out with seven minutes remaining in round two after Kyle Busch spun on Turn 10. Busch finished 11th (95.293 mph).

During the first round of qualifying, Michael Annett stalled on the track, bringing out the red flag with 15 minutes remaining.

Brendan Gaughan, who finished in P44 in the first round, is the only driver in the field who did not qualify for Sunday's race.

IT'S NEVER A PERFECT LAP, BUT HOW CLOSE WAS IT?

"They were both pretty good. We had that first caution on my first lap, and it's just one of those things. You've got to re-set your mind. But, the Kingsford Chevy has been good these first two days. I've really got to thank all my guys that are hear and especially back at the shop. They've worked on this car so much to do everything that we need to get as much speed out of it as possible. So, it's a good day, but we've got to focus on tomorrow."

[adinserter name="GOOGLE AD"]HOW DO YOU BALANCE KNOWING THAT THIS IS PROBABLY ONE OF YOUR BEST SHOTS TO WIN ALL YEAR, YET NOT PUT TOO MUCH PRESSURE ON YOURSELF?

"I don't know. I haven't grown up very well on not putting a lot of pressure on myself. So, it is what it is. We knew that if we go do our job and if I do my job tomorrow, and we have solid pit stops, and we just take care of business, at the end we should give ourselves a chance. And that's all we can ask for. It's a solid start, but the prize is tomorrow."

KURT BUSCH, NO. 41 HAAS AUTOMATION CHEVROLET SS – QUALIFIED 2nd
WHAT DO YOU LIKE ABOUT YOUR CAR AND YOUR PACKAGE FOR SUNDAY?

"It has a nice balance all the way through, the braking and transmission gears, and the overall corner speed. It's a nice package that (crew chief) Tony Gibson gave me, and all the guys back at the shop. Thanks to them for building this special car for a road course race. There was a little apprehension coming in because we didn't have testing sessions or any kind of shakedown sessions. And so, to be outside pole with the Haas Automation Chevy, that's awesome. That's what we wanted. And now we've got all kinds of strategy plays to figure out now to get into race mode. So, we did our job. We're on the front row."

ON HIS QUALIFYING EFFORT:
"After the first run we were third and I certainly got encouraged that I could make a few adjustments and hit my marks. I think the car was capable of being at least first or second. I missed one corner there on that last run and I don't know how much that cost me, but overall it was a really solid effort. I'm excited to have AARP Member Advantages on board this weekend. We are trying to take advantage of somethings ourselves here and having fun this weekend."

ON HIS QUALIFYING EFFORT:

"It was good. The guys did a really good job preparing the car and making sure we could get everything out of it. They improved on it from yesterday. A lot of the stuff they did to prepare for qualifying and it was good. We went out there the very first time out and the tires didn't seemed like they wanted to come in very well when they were new. I think whatever series was on the track before us it just had a little rubber that didn't agree with the rubber on the track. It was a little bit slick first getting going. But then after that the car had some speed. That last run we were just a little too loose and I got a little bit a wheel hop into (Turn) 11 and I think that would have put us pretty close to it if we could have pulled that off. I'm looking forward to Sunday."

ON HIS QUALIFYING RUN:
"Yeah, really bummed the first lap we had a braking issue and had to go back out for a second run and just about got in on old tires. Disappointed that we didn't get in on that first lap, didn't get in in general, but I know we've got a good car. We will go racing tomorrow and see what we get."

WHAT SECTION OF THE TRACK COST YOU THE MOST TIME?

"What section didn't I screw-up? This has just been something I've never been very good at as far as the Qualifying thing here at Sonoma. Our Budweiser/Outback/Folds of Honor Chevy is handing good and doing all the good things that you want it to, and it's really good in Qualifying trim, but I was just too easy in (Turns) 2, 3, and 4; and okay down the hill and then got up the race track both laps in (Turn) 11. So that cost us three or four tenths both times. We have a good car. I've got some cars to pass. We passed a lot of cars last year, but I'm just not very good at the Qualifying thing here, for whatever reason."

ARE YOU OPTIMISTIC ABOUT STARTING 20TH?

"Yeah, I think the car is going to be good. We just didn't get to go out and run a second run, there in Qualifying. Everybody picked-up. They did the same thing last year. I feel like we had a good enough shot to get into the Top 12, but coming out of Turn 11 to the green on our second run, the car got stuck in second gear and the transmission won't shift. So, we'll change the transmission. We're going to have to go to the rear, but I'm real happy with the car. We worked on it hard yesterday. We weren't good when we got here but we made changes and it's going to be a fun car tomorrow."