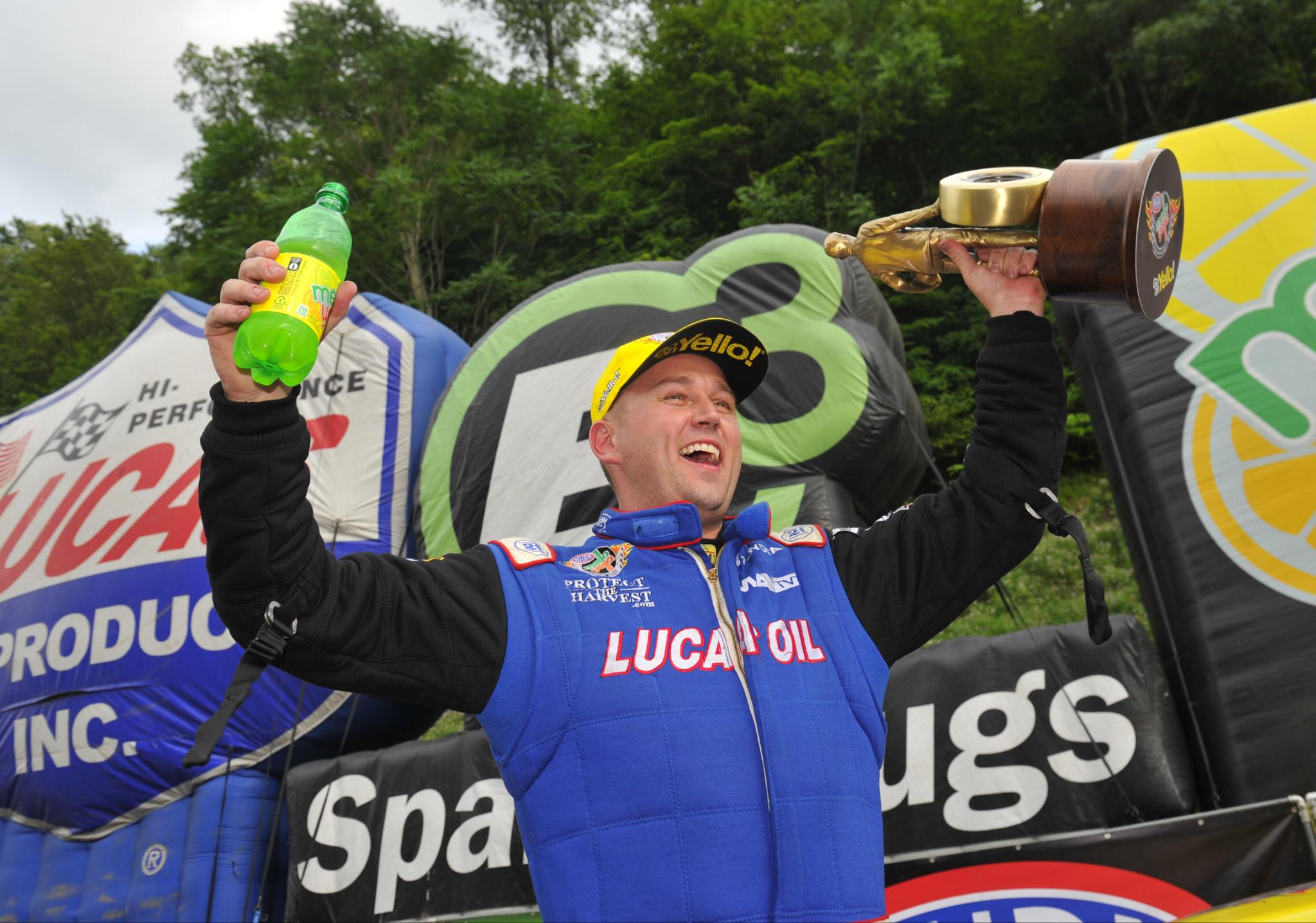 Funny Car points leader Matt Hagan took home his first victory at his hometown track with a victory over his Don Schumacher Racing teammate Ron Capps in the final round.

Hagan, from nearby Christiansburg, Va., bested Jeff Diehl, Cruz Pedregon and Jack Beckman in the preliminary rounds to advance to his fifth-career final round meeting against three-time Bristol winner Capps.

Hagan’s win was his fourth of the season and 18th of his career, but his first in seven tries at Bristol.

"This is just such a special race for me, I'm two hours down the road and I have so many friends, so many family members out there," said Hagan. "My mom and dad came out, my wife brought my kids Colby and Penny so it is so, so special.

[adinserter name="GOOGLE AD"]"I’ve wanted to win Bristol for a long time. I consider it my home track so it's nice to be able to pull down for win lights and hold a Wally up at the end of the day."

The victory allowed Hagan to pad his lead over Capps in the points standings, picking up 26 points to lead Capps by 87.

Richie Crampton scored his third victory of the season and helped himself out in the points race, beating former Top Fuel World Champion and two-time Bristol winner Larry Dixon.

Crampton picked up early-round wins over points leader Antron Brown, defending race winner Shawn Langdon and Doug Kalitta to advance to his third final of the season, looking to extend his finals streak to 3-0.

Meeting for just the third time in the finals, Crampton and Dixon hit nearly identical lights with Dixon getting a slight advantage at the start. Dixon had the lead briefly and looked to be holding his own against Crampton until his Bob Vandergriff-owned dragster began dropping cylinders about 200 feet from the finish, allowing Crampton to power past for the victory, running 3.884 at 321.04 mph over Dixon’s 4.004 250.41

The victory was the fifth of his career for Crampton and his first ever at Bristol, and pushed him from fourth to third in the points standings, 72 points behind Brown.

“To have a winning record over a former world champion is pretty exciting for me," said Crampton. “I can’t believe we keep racing each other in final rounds. They are a great group of guys. The law of averages says he is going to get me back real soon."

Enders-Stevens qualified in the no. 1 position for Sunday’s eliminations and won out over John Gaydosh, Jr., Jason Line and Shane Gray before moving on to her fifth money round of the season and her third in the last seven events.

Sunday’s Pro Stock finals was just the second time Enders-Stevens and McGaha had met in the finals, having squared off for the first time back in April in Houston where Enders-Stevens picked up the victory.

At the start of the final, Enders-Stevens was first off the line with a .025 light and a .030 advantage that McGaha was never able to make up, taking the win light by little more than half a car-length at the line, clocking in at 6.685 seconds at 206.95 mph over McGaha’s 6.689, 207.46 for her second-straight Bristol victory.

“I’m not shy to say that Bristol is one of my favorite places to race," said Enders, who earned her 16th-career victory. “It’s always been good to me. I guess every driver has their tracks that no matter what you do wrong it always ends up right, even if it’s not always pretty. That was what last year here was. Today we earned it."

Enders-Stevens took over the Pro Stock points lead by 14 points over Greg Anderson, who fell in the opening round to V. Gaines.