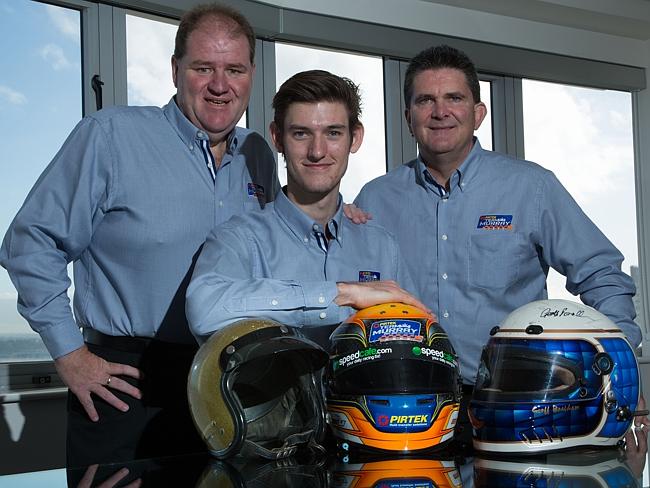 The grandson of Australian motorsport legend Sir Jack Brabham will race in next year's 100th Indianapolis 500.

The 21-year-old is just the third third-generation driver to qualify for the 500, following in the footsteps of his grandfather, who drove the first rear-engined car in the race in 1961, and father Geoff, who had a best finish of fourth from his 10 starts in the 1980s and 90s.

"There is no doubt that this is a dream come true," Matt Brabham said.

The team is the brainchild of Australian motorsport media group headed by Brett Murray and the venture is expected to cost about $1.5 million.

"I cannot thank 'Crusher' (Brett Murray) enough for his belief and Glenn Duncan and Pirtek for their faith and financial commitment," Brabham said.

Brabham is in Sydney ahead of the final race of the V8 Supercars season this weekend.

He will be the ninth Australian to qualify for the Indianapolis 500 since Rupert Jeffkins, from Maitland in NSW, drove in the first event in 1911.

Amazingly three of those nine have come from the Brabham family.

"My mum and dad are over the moon with the position we are in and I am sure my grandfather is looking down on us with a smile and can't wait for May 29 to roll around," he said.

"It's been a dream to be in the Indy 500 forever for me, ever since dad and my grandfather were telling me stories as a young kid.

"I think he would have been one of the proudest grandfathers in the world at the moment. He was so excited about my racing career."

"I have had a dream of having my own car in the Indy 500 since before Matt was born and Matt has had a dream of being a starter in the 500 since he was old enough to get behind the wheel," said Murray.

"I have been extremely fortunate to have had PIRTEK as a client and be a part of the PIRTEK "family" for more than 15 years and I could not think of any better people to be standing in pit lane beside us at next year's 100th Indy 500.

"I made a promise to Sir Jack (Brabham) before he passed away that I would do what I could to help Matt's career. If you are going to enter into such a program you need to do it with people you trust and who share a similar passion. So that made KV Racing the natural choice for us because of my long-term personal and professional relationships with Kevin (Kalkhoven) and Jimmy (Vasser).

"Team Manager Steve Moore and I have also know each other for some time and the energy he has put into helping me bring this together has been nothing short of first class. It's going to be one hell of a journey."

KV co-owner Kevin Kalkoven said that his team is looking forward to working alongside Brabham and Murray.

"Lots of people talk about "one day' having an entry in the Indianapolis 500, but when Crusher came to me and showed me his plans I was never in any doubt that he would make it happen," he said.

"What a wonderful thing to have an Australian-owned team being driven by only the third third-generation driver, a Brabham no less, and in the 100th running of the world's greatest race. Matt is a terrific young man, who has a great racing pedigree, but who is also very talented and who has a single-minded desire to be successful in the sport.

"Crusher is an amazing character who is one of the hardest working and most passionate people I have met in racing who has one of greatest relationship networks I have seen. I never doubted that he would get the deal done and make it one hell of a program for his partners.

"Jimmy (Vasser) and I have been friends of Crusher for many years and we are delighted to be working with him to provide the equipment needed for Matt to showcase his undoubted ability on this wonderful stage and to be competitIve in what will be an incredibly special event."

Brabham will be the ninth Australian to qualify for the Indianapolis 500 since Rupert Jeffkins, drove in the very first event in 1911 in a car entered by the Velie Motor Company, from Illinois.

"I don't think I have ever seen as much time, effort or determination put into something in my life," said Geoff Brabham.

"When Crusher showed me the tools he had built to make this program a reality, I simply could not believe it. Every minor detail had been thought through. It was all built around giving Matt the opportunity to show his talent on the Indianapolis 500 stage, which I am absolutely confident he can do.

"Crusher has his own dream of having his own car in the Indy 500 and for him to include Matt and the rest of the Brabham family on that journey is something else. Dad [Sir Jack)] and Crusher had a special friendship considering their age difference and it's just a pity he won't be here to share this with us."