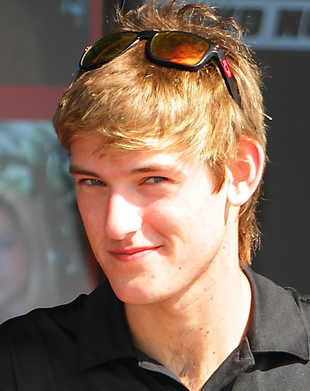 AR1 is hearing that Mazda Road to Indy standout Matthew Brabham has put together a deal to run both this year's Angie's List Grand Prix of Indianapolis and the 100th running of the Indianapolis 500. The 21-year-old Florida native and grandson of three-time Formula One World Champion Jack Brabham won the 2012 U.S. F2000 and 2013 Pro Mazda championships before running a full Indy Lights season in 2014.

In 2015, Brabham ran only three Lights races, as he was unable to secure funding for a full-season.

Apparently, however, he looks poised to run the two Indianapolis IndyCar Series races this upcoming season. It also seems that Ball State University will have a presence on the team, with students handling public relations, digital and social media stuff for the effort.

We're not entirely sure which team it will be yet. Brabham, of course, has run for Andretti Autosport in Pro Mazda, Indy Lights and Formula E, and Andretti usually runs an extra car or two for the Indy 500. So, we imagine Andretti is a possibility.