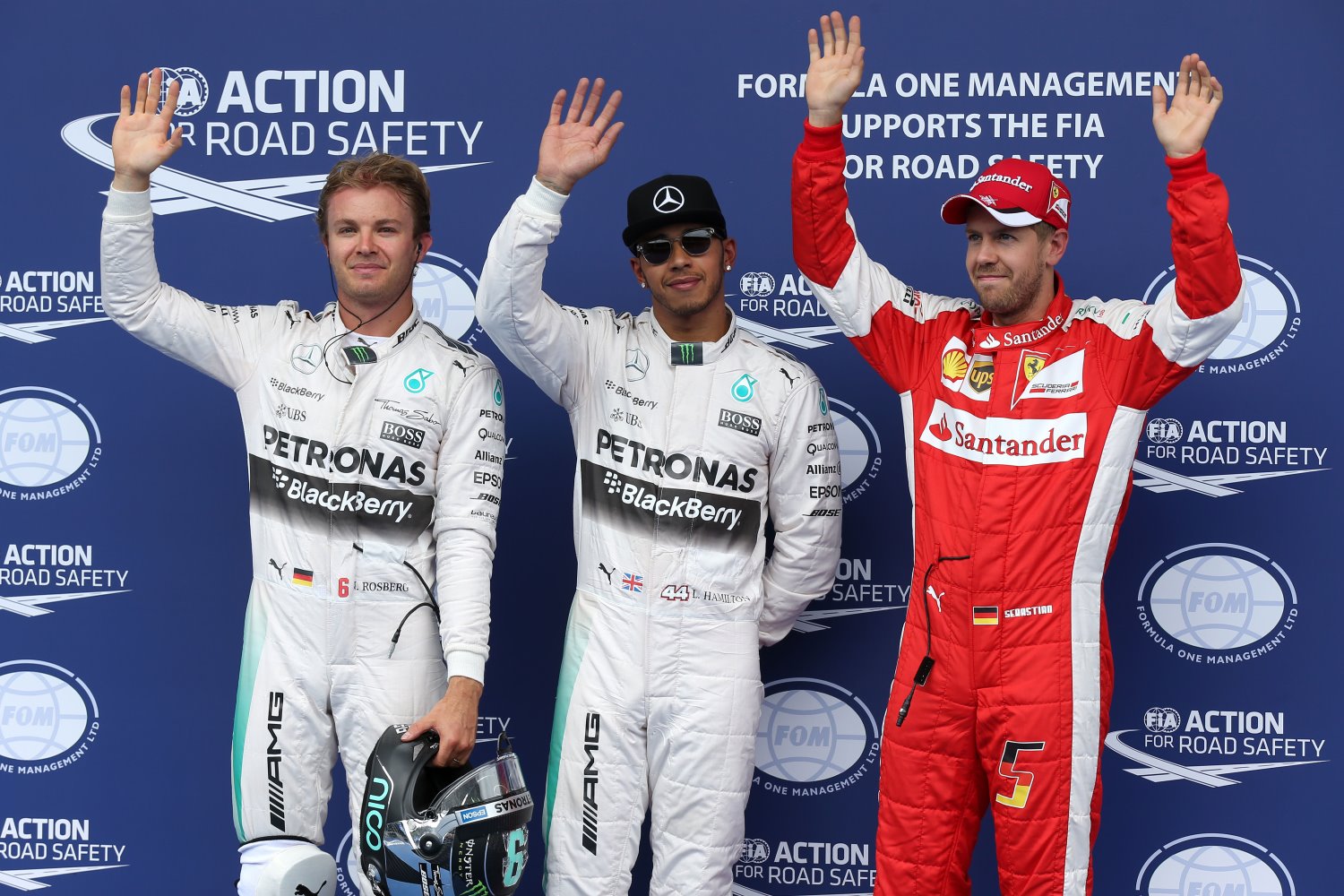 Lewis, many congratulations, but that looked very hard-earned out there today. Can you just tell us what happened?

Lewis Hamilton: Generally it was quite a difficult qualifying session, I think, probably for everyone, just with the track conditions. I was grateful that I got my third lap in on the first run in Q3. Always pushing for that bit extra in the next run and I just locked the rears.

Did you fear, once you’d locked them and you were off, that you’d lost pole?

LH: I wasn’t too particularly concerned with it at the time. I was trying to get the car going and look after the car, that was the most concerning for me. Obviously I had been backwards and I was in seventh gear or something like that, standing still, so I was trying to look after that. But naturally, shortly afterwards I was kind of like “you know, I probably lost it there".

Thank you, well done. Nico, the chance was there when you were on that final lap, you were up as well on that lap, what happened?

Nico Rosberg: I’m not sure actually. I went on the Astroturf out of the second to last corner and maybe that was still a bit wet or something or I just overdid after that, I’m not sure – just lost it there into the last corner. Definitely gutted but Lewis was two tenths quicker than my lap time and I was exactly two tenths up just up to that point, so I knew that I had to go for it, because it was very, very close and just overdid it.

Why is that last sector so difficult?

NR: This track, generally, is quite difficult, because you’ve got to get the braking right and you’ve got to attack to get a lap time done here and somehow it’s a very, very challenging track and easy to make mistakes.

[adinserter name="GOOGLE AD"]Well done. Sebastian, we come to you. Today was tough; the Mercedes seemed to have the edge out there today.

Sebastian Vettel: Yeah, once again I thought that we can probably have a bit of a word but unfortunately they were a bit too quick. We tried everything. I think it looked good generally throughout practice and preparing qualifying. Obviously Q1 was a bit tricky for all us but I think we settled into the groove nicely. The last part of qualifying… yeah, I guess generally Mercedes-powered cars seem to be able to turn up the performance quite a bit and if you look at those two guys but also the Williams, they were a lot closer than they were in practice. So there is some work for us to do. Overall, happy with third but as I said I would have loved to be a bit closer. I was happy with the car, I think we did a very good job, thanks to the team, I think we should have a good car in the race.

Lewis if I can return to you: Mercedes managed to dominate the race here last year but are you expecting more of a fight tomorrow from the Ferraris in the race?

LH: Yeah, Ferrari have really shown some great pace this weekend, as have the Williams. So that means that tomorrow’s going to be a tough race. I don't think the tires are going to be too much of a problem for everyone but every little bit of time will count tomorrow.

Q: Lewis, many congratulations. It’s been difficult conditions and what looked like a difficult track for you for a while. How satisfying is it to turn that around into pole?

LH: Well, it was really quite a bad qualifying session all around for me. I was off Nico for three or four tenths each session and each run, each lap and I just didn’t have the confidence in the balance I had at the time, and the temperature of the tires and the brakes. So, I’m really grateful that I at least got one decent… y’know, Q3 first run lap one and then lap three. The third one being much better. I’m grateful that I got those two laps in. And then coming to the end, I don’t know exactly what went on but obviously I locked the rears and snapped it around. A bit similar to what happened last year in Turn Two here so… yeah, I’m definitely do that quite often in this car. Not sure why. Got big feet I think.

Q: Nico, so close and yet unfortunately not quite there in the end even though your last quick lap had looked really, really good until that very final sector.

NR: Yeah, I knew the gap to Lewis was two-tenths before that. Of course there was a possibility he would improve that further and I was exactly two-tenths up, so I was equal with his lap time until, like, two corners from the end. So, that meant that I had to take a little bit more risk and just over did it. I don’t really know what happened. Maybe the tires got wet on the Astroturf because I went too wide in the second to last corner and then a little bit of humidity on the tires and maybe that caused the spin – not sure.

[adinserter name="GOOGLE AD"]Q: Sebastian, couldn’t keep up with those Mercedes boys today but the race pace looked strong in Canada. It’s a reversal of fortunes for yourself and Kimi but looking at the race tomorrow and the short lap around here, are you feeling confident this could be your first chance of another win since Malaysia

SV: Well we’re always ready, we always fight and obviously wait for our chances. So far it’s been quite difficult because they’ve been bloody quick but yeah, we’ll try tomorrow. Hopefully we can be a bit closer. We know that qualifying doesn’t match the race, so, yeah, we’re ready to attack and try our best.

Q: (Peter Farkas – Auto Motor) Sebastian, wouldn’t it have been better for you to do two quick laps in succession on your Q3 runs like the Mercedes did, to prepare the tires a bit better?

SV: We were fast, we were happy on the first lap so… I think in the end you do what you feel is best for you so that seemed to be the best for us today. You didn’t do two runs?

LH: We did two runs but we never did two consecutive laps.

LH: But you did three, basically.

Q: (Dan Knutson – Auto Action and Speedsport Magazines) Seb, I saw you had your headphones on going into the garage before qualifying. What sort of music do you listen to before qualifying to get yourself psyched up there?

SV: Help! From the Beatles. I need Help! They’re too quick so if you know how to fix it, please let us know. No, I always listen to the same song that just gets me ready. It’s not the first time I’ve had the headphones on.

NR: No. Didn’t make any difference at the time because his time was two tenths quicker. And anyways it’s just a distraction if someone tells me.

Q: (Peter Farkas – Auto Motor) Lewis and Sebastian, I think you are now tied on 45 poles each. Does it means anything to you to beat the other and maybe that’s a separate race for you two?

LH: I’m very fortunate that I’ve had a great car for the last two years to have been able to get the poles and raise the amount I’ve had. I’d much rather have his World Championships than the pole positions, so I’m working towards that.

SV: I like to have both! Obviously he’s been catching up quite a lot but we’re working hard to fight back.