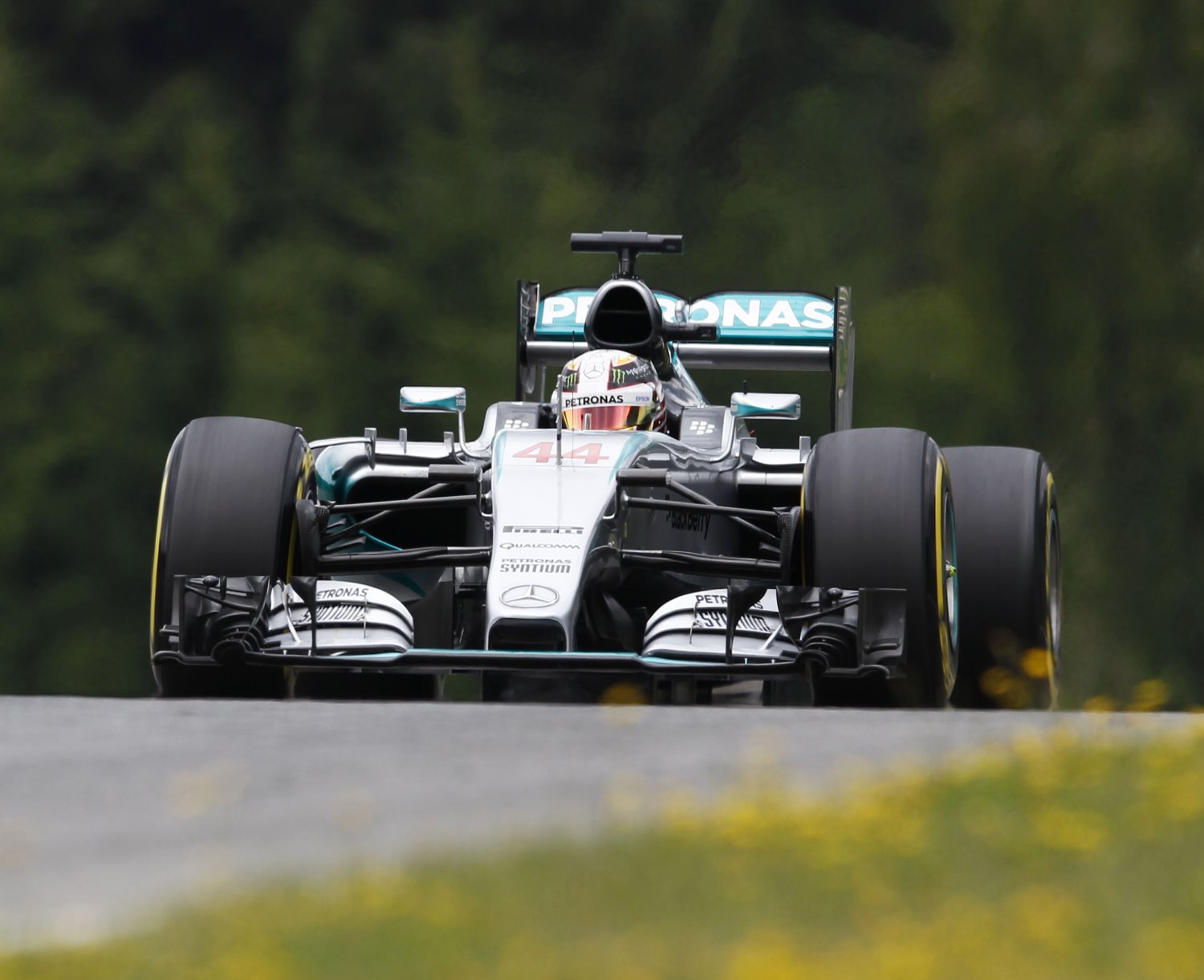 AR1.com has said all year that Mercedes has been sandbagging, with so much power in hand from their hybrid engine they can program in the HP they need to dominate whenever they want to. Ferrari's Sebastian Vettel led the last two practice sessions while Mercedes sandbagged to let fans think Ferrari had a chance this weekend.

Then came qualifying and the Mercedes engineers programmed in more HP and their two drivers blew Ferrari into the weeds to lock up the front row for the Austrian GP at the Red Bull Ring.

[adinserter name="GOOGLE AD"]After setting lap times out of reach from Ferrari, ironically both Mercedes drivers choked on their final runs to try and go even faster and both drivers lost control of their car. That brought out the yellow and Vettel had no chance to try and beat them, not that he would have been able to overcome Mercedes' 100 HP advantage.

On his final hot lap Hamilton lost the rear on the brakes for Turn 1 and had a dramatic spin, but managed to avoid hitting the barriers.

On his final lap Rosberg was on a flier and was faster than Hamilton through sector 2. Rosberg received a radio transmission that his teammate choked and he had a chance for pole. All he had to do was complete the lap.

However, Rosberg also choked and went straight on at the final corner. He ran a bit wide in Turn 8, kept his foot in it, then got out of shape in Turn 9 and locked up both front wheels trying to get the car stopped before reaching the gravel.

He is a defeated man.

Vettel improved on his final run in Q3, but his lap was only good enough for third, 0.155s slower than Rosberg's earlier effort.

LeMans winner Nico Hulkenberg managed to get between the Williams to take fifth, with Felipe Massa 4th and his teammate Bottas 6th.

The other Ferrari at the hands of Kimi Raikkonen did not make it out of Q1 with 18th best time, his team keeping him in the pits when the track was dry. Just dumb. However, he will start 14th after grid penalties for McLaren and Red Bull.

Lewis Hamilton
Generally it was quite a difficult session, for everyone I think, with the conditions. I'm really grateful I got that third lap in on the first run in Q3. I was pushing hard to find more time on the final lap of the second run and just locked the rears into Turn One. At that point I was backwards in seventh gear and just focused on trying to make sure I didn't damage the car. But then, once I stopped, I thought I'd probably lost it. It was bizarre but I'm really happy to get pole. It will be an interesting race tomorrow. Ferrari have shown great pace so it will be close with them. The tires seem to be behaving so we should be set for a good battle.

Nico Rosberg
I had to push a lot at the end of my last qualifying lap – but I pushed a bit too much and went over the limit. I saw on my screen that I was two tenths quicker than on my previous run and therefore equal to Lewis. It was really up to the last few meters to make the pole happen but, at turn eight, I went wide and got a bit on the astroturf which was still wet. I think after that my left tires were also wet and that made me lose control of the situation. It's a shame but I still look very much forward to tomorrow. It's a great race here and I still have good chances to win. I will need to have a good start to have a shot at Lewis but I will definitely be keeping the pressure high.

Toto Wolff, Head of Mercedes-Benz Motorsport
First and foremost, we are shocked by the tragic events this afternoon in Graz. Our thoughts are with the injured and our deepest sympathies go the families of the victims. Next to something like this, our little world of Formula One pales into insignificance. On track, that was probably one of the strangest ends to qualifying I have ever seen. We had two drivers who thought they had lost pole, bringing out the yellow flags at different parts of the lap, and we still ended up on the front row. The mistakes on the final laps showed just how hard both guys were pushing out there. Nico had the upper hand for most of the session, then Lewis did a great time in Q3, before Nico was set to claim pole back until he went off at the last corner. We think it will be a much more difficult race for us tomorrow. Ferrari did some seriously quick long runs yesterday and today and they looked quicker than us, so it will be a tough battle. We will let our boys fight tomorrow, like we have done all along, but it will be a challenging afternoon.

Paddy Lowe, Executive Director (Technical)
A great result but a bizarre ending when both of our cars spun off – one at the first corner and one at the last. It is a sign of how hard Lewis and Nico are pushing each other – right on the limit and, in this case, over the limit. It was also proof that qualifying in Formula One is all about ultimate pace – pushing driver and machine to the very limit. The session itself was a tricky one – especially with the drying track through Q1. There was a little bit of concern with Lewis, as we saw Kimi fall out at that point, but all turned out well. As the conditions improved, the session became more straightforward. Our plan had been built around getting secure lap times on the board with the first run in Q3 – fortunately so, as it turned out. Congratulations to the team, also, for the developments that we brought to this race which have kept us at the front of the field.

DANIIL KVYAT
“We did all we could today with the tricky conditions we had. We got the most out of the car and the session that we could, which is positive. Starting from where we will be starting, it will be a difficult race for us, but if we can get a few points, that will be a good result for the team. We still have a lot of work to do, because qualifying around seventh and eighth is not where we want to be."

DANIEL RICCIARDO
“It was an unlucky Q2 for us. We lost some temperature in the brakes and I was losing time that I couldn’t make up in the high-speed straights. We made a compromise with the set up this weekend to accommodate the penalty we would be facing; we sacrificed some downforce for some straight-line speed. The grid position doesn’t change much for us with the penalty; we’ll try and do what we can in the race tomorrow."

CHRISTIAN HORNER: “Our first thoughts today are with the victims and their relatives of the terrible tragedy in Graz. As to our performance on the track our focus was very much on a race set up. Dany did a good job to qualify eighth. He probably could have been a bit quicker but the yellow flag for the Mercedes incident meant there was no DRS allowed. It was a difficult session for Daniel, who had some issues on the downshift that we need to look into. It’s going to be a challenging race for us tomorrow, but we’ll do the best we can."

*Penalties to be applied