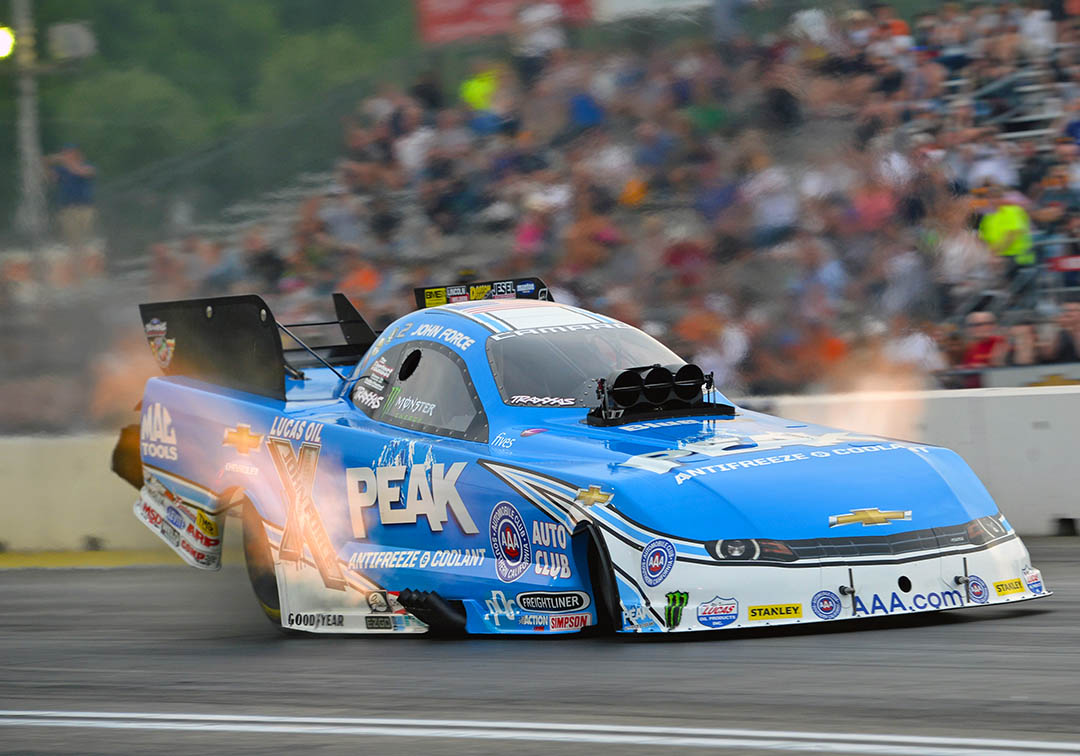 16-time NHRA Funny Car Champion John Force added another milestone to his already legendary career with a win in Sunday’s third-annual New England Nationals at New England Dragway and Motorsports Park in Epping, N.H., giving him a victory in every racetrack that the NHRA Mello Yello Drag Racing Series has participated at.

Force collected his 143rd Funny Car victory with a win over top qualifier Tommy Johnson Jr. in the final round, and did it the hard way – taking down points leader Matt Hagan with a holeshot in the second round and then longtime rival Cruz Pedregon in the semis to face Johnson, Jr. in the final for their eighth-career final-round matchup.

Johnson – still looking for his first win of the season – jumped out to an early lead in the money round with a 0.069 light, but Force rallied to pull even at the 330-foot mark then nosed ahead to get the win light with a run of 4.160 seconds at 309.49 mph to steal his second win of the season. Johnson clocked in with his slowest run of the day, going 4.195 seconds at 304.25 mph. Adding insult to injury, he also oiled down the track for the second time of the day, costing him 10 points and $2,000.

Force’s win moved him up from fifth to third in the standings, and now has at least one victory 25 different racetracks, including every track currently on the circuit.

"I raced here 38 or 40 years ago before most of you were born to come back and have one race on the circuit that I couldn’t win; I needed this race win," said Force. “One of these days I am going to go out and it is going to break my heart but I ain’t leaving until I win all of them and now I’ll try and win all of them twice. This was a great day,"

Tony Schumacher completed the weekend sweep with a victory over three-time champion Larry Dixon in the Top Fuel final, giving him his second win of the season and his second consecutive victory in this event.

Schumacher entered the day as the top qualifier with a record-breaking run on Friday that shattered the track ET record, earning an opening-round match with Morgan Lucas that ended with a bang as the engine on his Don Schumacher Racing dragster exploded in a fireball just past the halfway point. Schumacher escaped unscathed with a victory and moved on to defeat Clay Millican and teammate Spencer Massey to reach the finals.

Schumacher’s victory was the 79th of his career and allowing him to close the gap on points leader Antron Brown, now trailing his teammate by 33 points.

“I felt like I drove well today. Together as a team we went out and won. We did a great job, what a battle," said Schumacher. “To go out there and qualify No. 1, the odds are against you. People think it's easy to win from the No. 1 spot, but it's difficult. It was a rough first round, but (crew chiefs) Mike (Green) and Neal (Strausbaugh) made the correct changes to go fast and we won the race."

In Pro Stock, Greg Anderson bested Allen Johnson in the final round for the second weekend in a row, giving Anderson his first back-to-back victories since 2011 and extending his lead in the series points standings.

Anderson, who qualified in the no. 2 position for Sunday’s eliminations, picked up wins over Val Smeland, Drew Skillman and Jason Line to reach his sixth final round of the season and second straight against Johnson.

Anderson collected his 77th-career Pro Stock victory and extended his lead to 70 points over Erica Enders-Stevens in the points standings.

“We're definitely on the upswing," said Anderson. "It's been awesome the last few months, ever since we brought this little red Summit Racing Chevy Camaro out at Gainesville. We took her all the way to victory circle there, and the performance of the car has gotten better every race we've gone to. Looking back at today and last weekend in Englishtown, I have made 16 so-close-to-perfect runs in a row. It's awesome. This car is fun to drive. This is what you work for, what you push for. Our team has it going on right now, and I'm absolutely having a ball."