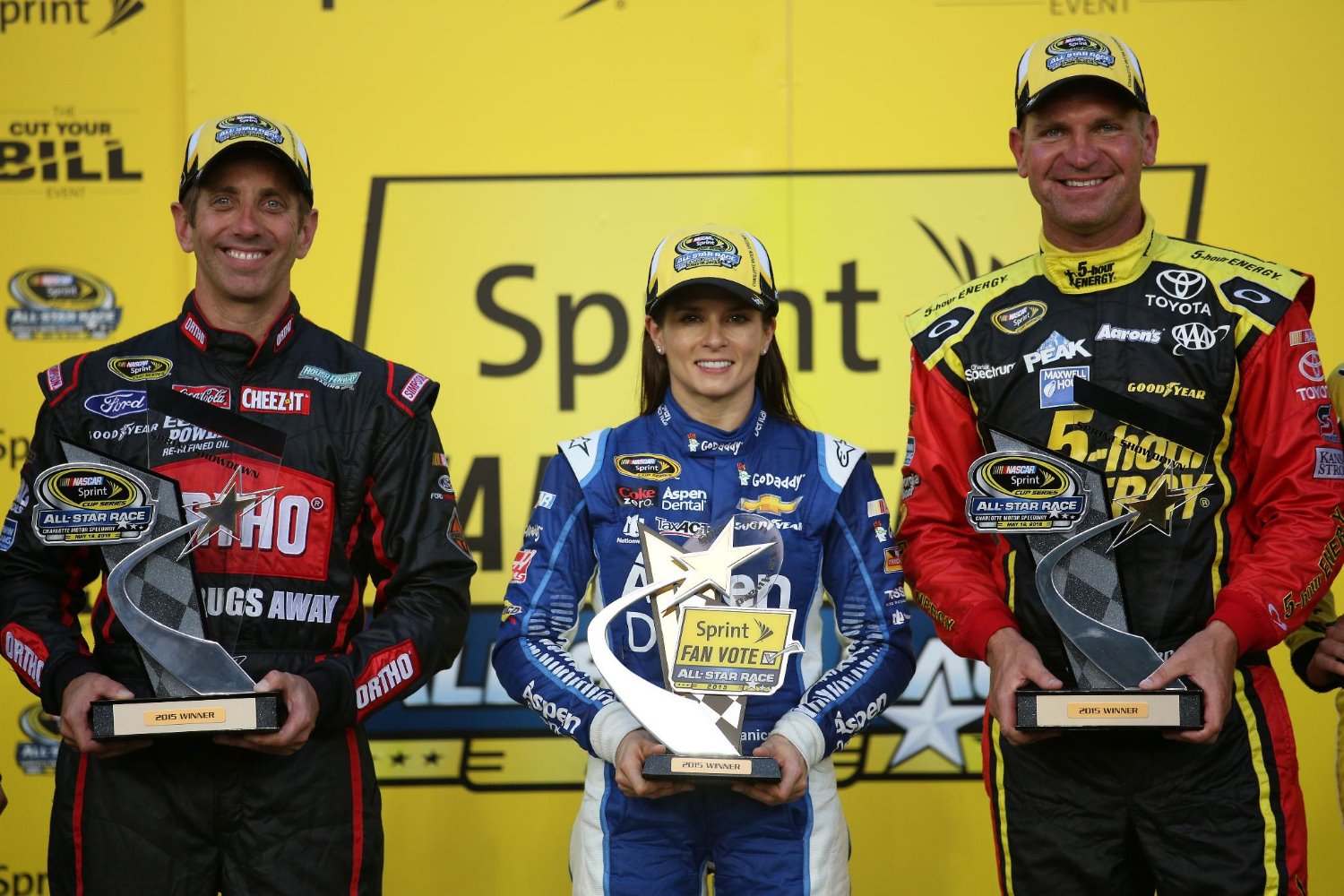 Greg Biffle and Clint Bowyer raced their way into the field for Saturday night’s NASCAR Sprint All Star race after picking up victories in Friday’s night’s Sprint Showdown at Charlotte Motor Speedway.

Biffle won the opening 20-lap segment in a runaway to advance into the field, while Bowyer fought his way to the front with a thrilling three-wide pass to win the second segment to race his way into the All Star Race for the second straight year.

Biffle and Bowyer will be joined by Danica Patrick, who won the Sprint Fan Vote to complete the 20 car all-star field.

Friday’s race consisted of two 20-lap segments with the winner of each segment transferring to the All Star Race.

In the opening segment, Biffle powered past polesitter Paul Menard on the opening lap to grab the early lead and within just a few laps had opened up a one-second lead on the field.

Farther back in the pack, they were running three wide with rookie Chase Elliott chasing down Casey Mears and Michael McDowell battling for tenth.

Up front, Bowyer worked his way into second place followed by Menard and Austin Dillon, but Biffle had already checked out on the field, going onto lead wire to wire to beat out Bowyer by 1.6 seconds. Paul Menard was third, followed by Austin Dillon and David Ragan.

Biffle advances his 12th-career all-star race, marking the second tie he’s has to race his way in.

“It’s been a while since we’ve been out front leading, so I was paying attention to those guys and trying to run as hard as I could and try to figure out my car for tomorrow night," said Biffle. “It’s kind of nice to win. Everybody at Roush Fenway has worked really hard. I was joking with them I said, ‘I’ve never been so excited to win half a race in my life,’ so I guess I won half the race tonight and maybe I can win the other part of one tomorrow night."

[adinserter name="GOOGLE AD"]The break between segments brought the field to pit road, with Ragan, Martin Truex, Jr., and Kyle Larson taking on two tires to get the jump on the field while Bowyer and Menard took four.

Truex, Jr. jumped out to the lead at the start of the second segment before the yellow flag waved for a spin involving J.J. Yeley.

Back under green, Truex, Jr. and Larson raced side by side for the lead for nearly a lap before Bowyer shoved his way to the bottom to make it a three-wide battle for the top spot. The three drivers ran door to door to door until Bowyer was able to edge past Truex, Jr. on the low side to take lead.

Truex, Jr. fell back quickly as Menard raced his way past to take second with Larson following in third before Larson got loose and brushed the turn four wall, sending him to pit road.

Up front, Bowyer pulled out to a comfortable lead of nearly 1.7 seconds as he cruised to the checkered flag over Menard, Truex, Jr., Sam Hornish and Elliott.

Bowyer’s victory was his second straight in the Sprint Showdown, earning him his seventh all-star start.

“You definitely don't want to be known for the winner of the Showdown. But it's a lot better than going home," said Bowyer. “Anytime in life you can get an opportunity to win $1 million, I mean, you win this. It's a prize. It's $1 million. That check goes a long ways. I'm pretty excited about that opportunity.

[adinserter name="GOOGLE AD"]“Tomorrow night's a big thing in our sport. It always has been and it always will be. A lot of people come out for that. I'm glad that we're part of that show."

Danica Patrick was voted into the All Star race second time, becoming the first repeat winner of the Sprint Fan Vote.

“I'm extremely fortunate to have some great fans," said Patrick. “They're very active all across all the social media platforms and just in general cheering for me out loud at the racetrack.

“I'm just extremely fortunate. I don't take them for granted for a second. That's why I want to do well, 'cause I want to do well for all those people that wear my shirt and wave my flag and wear my hat. I see them wear it and I want them to see me on the track and be proud and have an exciting weekend."