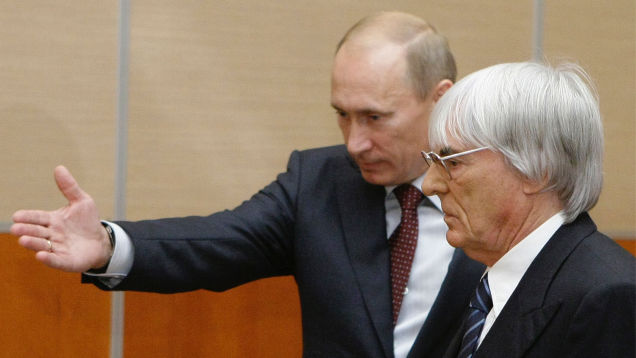 (GMM) Bernie Ecclestone has now stepped away from his earlier claim that the sale of formula one is imminent.

Earlier this week, the F1 supremo indicated that he thinks one of three interested parties will take over from current owner CVC "very shortly".

In the wake of the comments, the Financial Times reported that CVC and a US-Qatari consortium have "shaken hands" on a deal, with a source saying due diligence is taking place now.

That would tie in with Ecclestone reportedly meeting with Miami Dolphins owner Stephen Ross at Wembley Stadium last weekend, but Ecclestone insisted: "We did not talk about what you think."

And he is now backing away from his earlier comments about F1's imminent sale, which had triggered rumors that Ecclestone could also sell his shares and step down.

"I do not need to leave at the moment," the 84-year-old Briton said on Thursday. "I didn't mention anything."

He admitted that three parties are "interested" in buying F1, but he insisted "I am not selling".

Indeed, a new report in the Telegraph newspaper claims Mackenzie and Ecclestone might even join forces to buy more of CVC's shares.

"I think he might buy and if he does I would go in with him," Ecclestone told F1 business journalist Christian Sylt.

It might be an odd time for sale rumors to be flying about, given the uncertainty surrounding the futures of Red Bull and Lotus, and two small teams having filed a complaint about F1 with the European Commission.

Ecclestone said he is not worried about the latter.

"Not at all. There is no cartel," he insisted. "Let's see what the Commission does about it (the complaint).

"Anyone who follows F1 will know that we will survive and still be here in a million years."