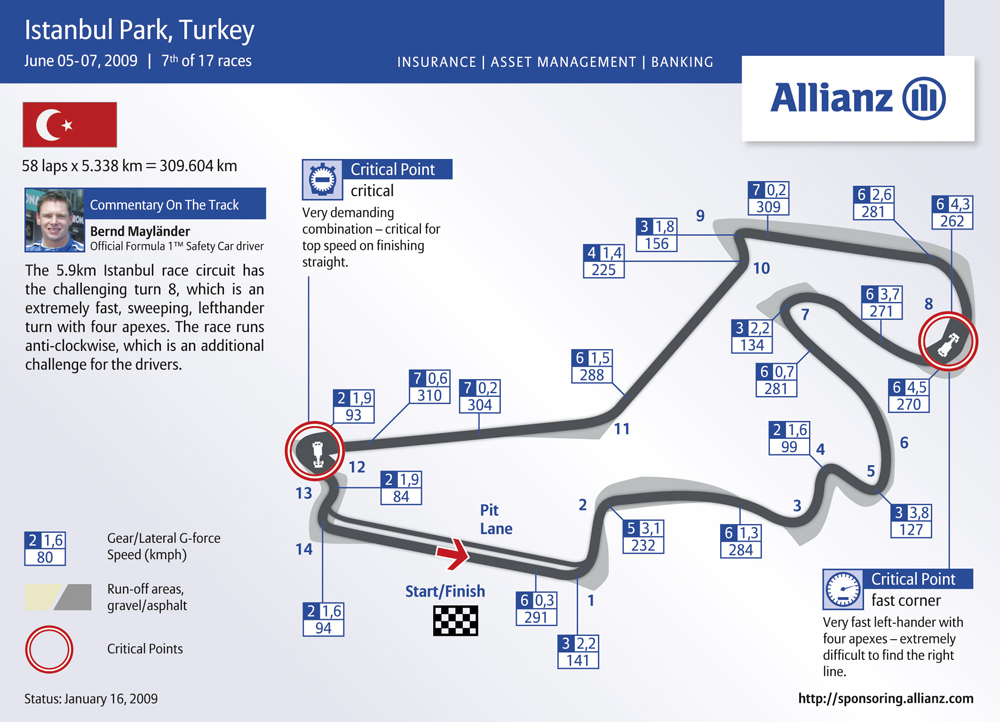 (GMM) Turkey could be set to return to the formula one calendar.

Last week, Istanbul Park – having hosted seven grands prix until 2011 – returned to the headlines when reports emerged that new operator Intercity planned to turn the Hermann Tilke-penned circuit into a used car dealership.

It turned out the reports were wide of the mark, when Intercity's chief said the track "still has a grade 1 FIA license" and could therefore return to the calendar "in the future".

The future could now be close. Anadolu, the state-run Turkish news agency, said Intercity chairman Vural Ak has travelled to London for talks with Bernie Ecclestone.

He said only one hurdle now remained.

"The Turkish government should approve the race because it's an international activity," said Ak. "For this reason, we are waiting for the election" on 1 November.

If the race gets the green light, Turkey could return to the calendar as soon as 2016.

"I can say that the only thing we need is the final signature to enter the official calendar," Ak added.

F1's provisional calendar for 2016 already features an unprecedented 21 races, with recent reports saying Ecclestone could extend it until December.

But the F1 supremo told Reuters: "I think we can escape going into December, otherwise it's getting a bit too near Christmas."

01/11/13 Turkey won't return this season after the government refused to help cover the cost of hosting the grand prix. With the calendar down to 19 races after New Jersey failed to deliver, there had been talk of Turkey taking the 20th slot on the calendar.

Earlier this week, though, Bernie Ecclestone announced that negotiations had broken down due to a lack of financial agreement.

"Erdogan, however, did not give his approval, and the project fell apart."

01/05/13 A decision about whether to add a 20th race to the 2013 schedule will be made next week, with Istanbul the favorite to take the place of the postponed race in New Jersey, if a replacement is chosen at all.

The FIA World Motor Sport Council published a revised fixture list during December 2012 that accommodates a 20th race on July 21, a slot between a rescheduled German Grand Prix and Hungarian Grand Prix.

The FIA also confirmed that this race was reserved for a European host, with in Turkey, France and Austria mooted as possible venues.

Formula One supremo Bernie Ecclestone played down the chances of returning to the Red Bull track in Austria's Spielberg mountains, and with FranÃ§ois Hollande's recently elected national government's decision to cut public funding in France, Magny-Cours seems an unlikely venue as well.

"At the moment, I'm thinking more about Turkey and a return to Istanbul," Ecclestone earlier.

The proposed Turkish Grand Prix is not without its problems, however.

During December Turkish minister of sport followed the direction of his French counterpart and confirmed that no public funding would be made available to help revive the race that normally took place just outside the country's capital.

"Just now, I am thinking we might have only 19 Grands Prix this year," Ecclestone added.

"That would not be a big problem for Formula One. Probably we will be able to reach a decision next week." Planet F1

12/06/12 (GMM) Turkey is set to return to the formula one calendar, the government-linked Turkish news agency Anadolu Ajansi reported on Thursday.

The report said "everything except the price" has been agreed between Turkish officials and F1 chief executive Bernie Ecclestone.

The news follows the FIA's announcement on Wednesday that a twentieth race date for an unidentified additional European event has been set aside for mid 2013.

"We have agreed in principle the matter of the contract with me as the operator," businessman Vural Ak, who has taken over the management of 2005-2011 Turkish grand prix venue Istanbul Park, is quoted as saying.

Ak said the matter should be resolved on Friday, when Istanbul hosts the official FIA prize-giving gala.

"The prime minister is invited," he revealed. "He will discuss it there, because the state has a contribution to make.

"We have agreed in principle, but the government will make the final decision."

12/05/12 (GMM) Bernie Ecclestone has confirmed he is pushing to revive the Turkish grand prix, which if it happens will be another nail in the coffin of the NJ race – no room on the calendar. They blew by giving up their slot in 2013.

We reported at the weekend that Istanbul Park, the Hermann Tilke-penned circuit that hosted formula one between 2005 and 2011, has been taken over by local businessman Vural Ak.

F1 chief executive Ecclestone told Italy's La Gazzetta dello Sport: "I am going to Istanbul to see if we can get the Turkish grand prix back before participating at the World Council."

The 82-year-old Briton also used the interview with the authoritative sports newspaper to reject claims by Ferrari president Luca di Montezemolo he is now too old to be in charge of F1.

"I have a thousand ideas," said Ecclestone.

Formula one raced at the Hermann Tilke-penned Istanbul Park – featuring the famous four-apex Turn 8 corner – between 2005 and 2011.

Bernie Ecclestone and race organizers could not agree a new race fee for 2012 and beyond.

But late last week, British journalist Bob Mackenzie, of the Daily Express, revealed that the F1 chief executive is "pushing for a return" of the Turkish event, "after ruling out a French race".

Greek website gocar.gr said the decision will be made in the coming week.

Turkey's change of fortune is due to a local businessman, Vural Ak, buying the circuit's management rights.

"I've known Bernie Ecclestone for many years," he said.

Ak, who is willing to pay $5m out of his own pocket, said Ecclestone is asking for a $26 million fee for the race.

He said the Turkish government is willing to put in $13.5 million, "So we are close to the sum of about $20 million a year".

Ecclestone said: "It is an issue that we would be happy to discuss with those responsible.

"We would very much like to return to Turkey."

08/16/12 F1 CEO Bernie Ecclestone "believes a return of F1 to Turkey in '13 is in the realm of possibilities if the sides could agree on a sanctioning fee amount." The Turkish F1 Grand Prix, which was part of the F1 calendar from '05-11, was dropped in '12 due to "low attendance numbers in previous years and the disagreement about the sanctioning figure amount." A new hope for a return of the race was sparked by Ecclestone's comments in Wednesday's issue of the Turkish "Haber Turk" newspaper. Ecclestone said that he and the teams were always "happy" with the race. Ecclestone said, "If we can resolve the problem of the sanction fee amount, then Turkey will return to the F1 calendar" MotorsportTotal.com

But the race was not included on the 2012 schedule, after organizers and F1 chief executive Bernie Ecclestone disagreed over the sanctioning fee.

81-year-old Ecclestone, however, said on Wednesday that he, the teams and the FIA are "happy" to go to Turkey.

He told the major daily Haberturk: "If we can solve this (fee) problem, Turkey can return to the F1 calendar."

It is not known if the news is linked with recent reports that, amid Greece's severe economic crisis, the country could enlist neighbor Turkey's help to stage a formula one street race in Athens.

A report in the Hurriyet daily said Greece was in serious talks with Turkish race official Mumtaz Tahincioglu.

"We have to support all projects that market Greece," said Greek sports minister Kostantinos Cavares.