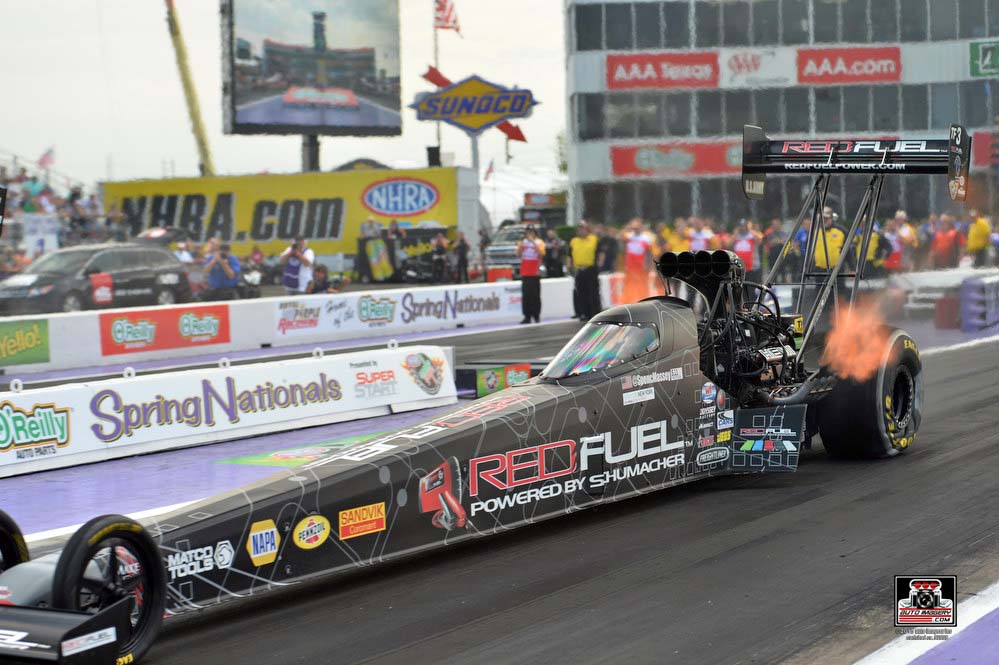 All three drivers etched their names in the track record book as part of a record-setting qualifying session in the hot humid conditions near Houston, Texas.

Texas native Spencer Massey set both ends of the record book with a pass of 3.734 at 330.07 on Friday that broke both the track ET and speed records.

[adinserter name="GOOGLE AD"]Massey hit the track as the second-to-last pair of the Friday evening session and knocked Tony Schumacher off the top spot. None of the top five qualifiers were able to improve on their time in Saturdays sessions as Massey collected his eighth NHRA no. 1 qualifier and his first since 2013.

"I've been to a lot of races in Houston, helping out friends with their cars, but I really, really want to get a win there for myself and all of my family and friends that will be coming out."

Kebin Kinsley took the bump spot and will make his NHRA Top Fuel debut against Massey on Sunday. Kinsley bumped out Terry McMillen, who posted his second DNQ of the season.

"Fast" Jack Beckman lived up to his nickname as he became the first Funny Car driver in to post a three-second pass in track history, clocking in with a 3.988 at 318.17 mph in Friday's evening session that went untouched on Saturday to earn him his 11th-career top qualifier. The record-setting pass shattered the previous mark of 4.021 set back in 2010 by John Force.

Beckman's time was just two one-thousandths slower than his career-best time 3.986 set back in 2012 at Reading, and earned him his first no. 1 qualifier since Brainerd in 2013.

"I feel really confident," Beckman said. "I've always felt I could win the next race I go to because DSR always gives us the best ability to do that. I always feared pulling up next to (crew chief) Jimmy Prock's car on race day even if I had driven a car that had performed better. Now I'm taking a lot of comfort in the fact that we might be doing that to the people in the other lane."

Terry Haddock took the bump spot to face Beckman in the opening round on Sunday. Haddock bumped out Todd Simpson who was the only driver to miss the race.

[adinserter name="GOOGLE AD"]The Pro Stock division provided the only real excitement on the second day of qualifying as two-time Sprint Nationals winner Jason Line roared back in Saturday's final session to re-claim the top qualifying spot with a blistering pass of 212.33 at 212.33 mph to break the track ET record en route to his second-straight no. 1 qualifier and 40th of his career.

Line had held to top spot after Friday's opening round before getting bumped by Shane Gray in the evening session. In Saturday's opening session, Line and Gray hit the track as the final pair and traded the lead again, with Line bumping Gray by .011 seconds.

In the final session, Line and Gray again made up the final pairing, with Line holding the no. 1 spot and breaking the previous best of 6.539 set in 2010 by Mike Edwards.

"People always say I whine about not making a good run, but I made a good run that time," Line said. "It was bad to the bone. It might need a little ice after that one. This is about as excited as I get. We actually put on some new parts today and we're definitely better. Going forward we're going to be tough."