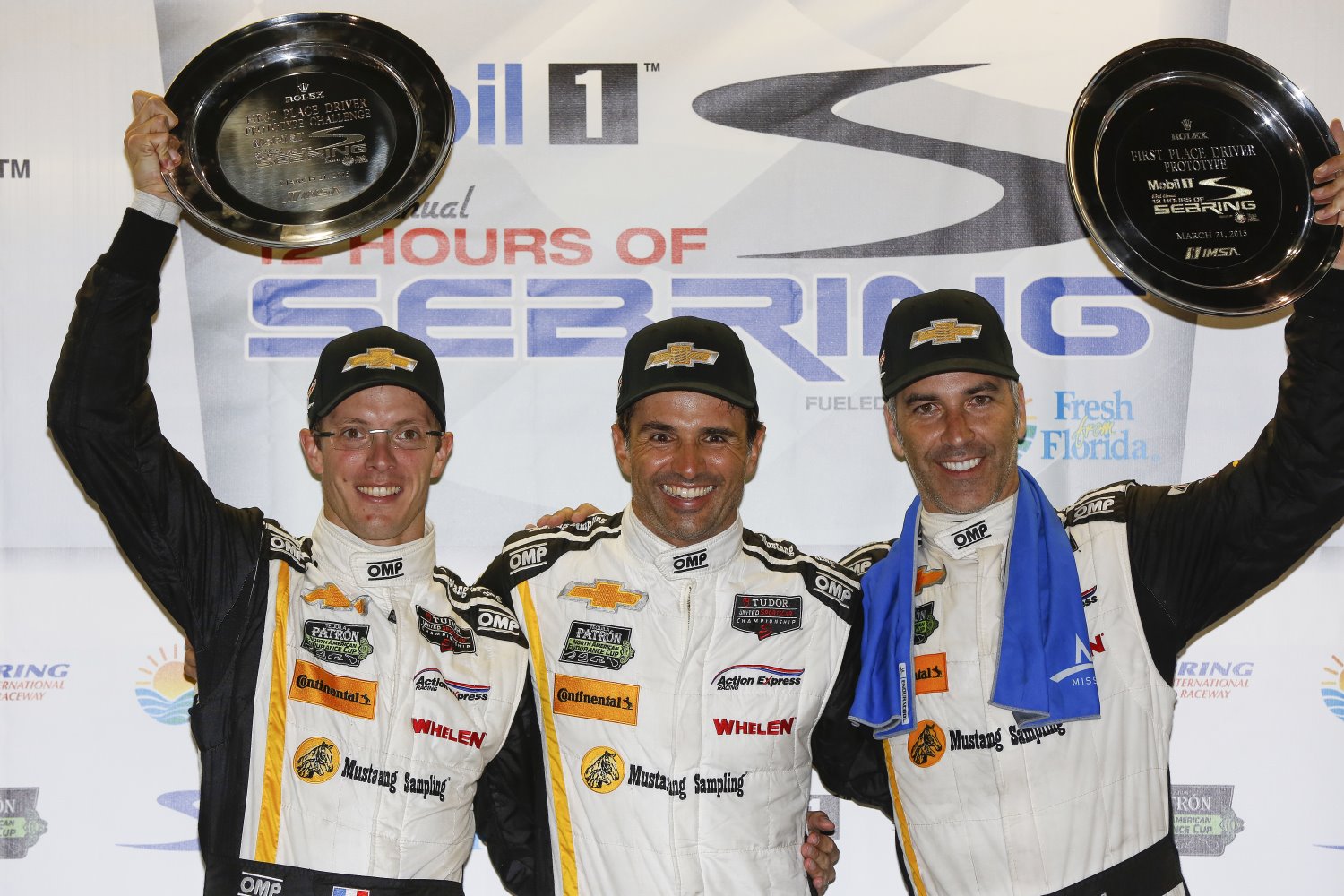 On an unseasonably hot, humid day and night – even for Florida – the No. 5 Action Express Racing Mustang Sampling Corvette DP team remained cool and collected, taking the overall victory Saturday in the 63rd Mobil 1 Twelve Hours of Sebring Fueled by Fresh From Florida.

It was the first overall win for a Chevrolet in 50 years – since a Chevy-powered Chaparral won in 1965. Coincidentally, the Chaparral was the featured car at this year’s race, and that winning car was on hand.

The Action Express Racing car, driven by Joao Barbosa, Christian Fittipaldi and Sebastien Bourdais, is a Prototype, the fastest of the four classes that race at Sebring. The team finished second in the 2015 TUDOR United SportsCar Championship season opener, the Rolex 24 At Daytona, and won the 2014 season championship.

It was an all-Corvette podium, as second overall, and second in the Prototype class was the No. 10 Wayne Taylor Racing Konica Minolta Corvette DP, followed by the No. 90 VisitFlorida.com Corvette DP.

Finishing first in the Prototype Challenge (PC) class, and sixth overall, was the No. 52 car of PR1/Mathiasen Motorsports car driven by Mike Guasch, Andrew Palmer and Tom Kimber-Smith, which also won the class at Daytona. In second was the CORE autosport team, followed by the Performance Tech Motorsports team. The PC cars are essentially all the same, using ORECA chassis and Chevrolet V-8 engines.

The other two classes are based on production cars – the GT Le Mans (GTLM) class cars are slightly faster, and more expensive, than the GT Daytona (GTD) cars. And at the end, it appeared no one wanted to win the two classes, as the lead changed dramatically several times in the final few minutes.

GTLM is arguably the most hotly contested class, because the entries typically have the backing of manufacturers including Porsche, Chevrolet, BMW, Aston Martin and Ferrari.

[adinserter name="GOOGLE AD"]At the checkered flag, a Chevrolet Corvette C7.R – a completely different car from the Prototype Corvettes — earned bragging rights in GTLM with a win by the No. 3 car of Jan Magnussen, Antonio Garcia and Ryan Briscoe. A close second was the No. 62 Risi Ferrari 458 Italia, which also won the DEKRA Green Challenge award, given to the cleanest, fastest and most efficient car in the class. In third was the No. 17 Team Falken Tire Porsche 911 RSR.

GT Daytona (GTD) was the largest class with 14 starters, and taking the victory in the class was the Team Seattle/Alex Job Racing Porsche 911 GT America, driven by Ian James, Mario Farnbacher and Alex Riberas. An Alex Job Racing car lost a chance at a win last year due to a scoring error, so it was a sweet return to victory lane for the veteran owner on his home track.

Finishing second was the No. 007 Aston-Martin Vantage of TRG-AMR, driven by Christina Nielsen, James Davison and Brandon Davis. Third was the No. 63 Scuderia Corse Ferrari 458 Italia. The No. 33 Dodge Viper of Riley Motorsports – a car that burned to the ground in last year’s race, but was restored – was leading the class until the final five minutes, when it retired after overheating.

Among those making an early exit was the second-fastest qualifier, the No. 1 Extreme Speed Tequila Patron Honda HPD ARX, which driver Ryan Dalziel drove to an early lead. Its sister car, the No. 2, started eighth and also retired early. The No. 1 had steering problems, the No. 2 lost engine turbo boost.

Also out early after a crash was the No. 60 Honda HPD Ligier JS P2 of Michael Shank Racing, which qualified fourth. Both Mazda SKYACTIV diesel Prototypes fell out long before the end, one with a broken drive belt, the other with overheating issues, as the cars finished 38th and 39th. The innovative DeltaWing had issues all day, until a broken suspension finally sent the team to the paddock for good.

There were multiple incidents during the race, but the scariest moment occurred on pit road, when two Prototype cars running side-by-side collided, sending one into Kevin Fox, a crewman for the No. 50 Fifty Plus Racing Riley BMW Prototype. Fox went flying, landing hard on the concrete, but was able to walk to the ambulance. He was evaluated and released at a Sebring hospital. Also making a quick trip to the track’s care center was Oliver Gavin, who crashed the No. 4 GTLM Chevrolet Corvette C7.R with about two hours to go. He was evaluated and released.

If you missed the Twelve Hours of Sebring, a two-hour highlights show will air Sunday morning from 8 to 10 a.m. on FOX Sports 1. The TUDOR Championship moves from Sebring to California for the third round of the series on April 18 for the Tequila Patron Sports Car Showcase at Long Beach.

"To think that in 1965, a Chaparral – which had Chevy power but was prepared by Jim Hall in the Prototype category – won this race overall. Here we are, 50 years later, and our Corvette Prototypes of the modern day got an overall win. That's very special. We're very proud to see Chevrolet and Corvette go up alongside so many famous marques that have won this race."

Definitely, it's very important for the team. The teamwork starts back at the shop. It doesn't start on Friday morning. Basically it's back at the shop. When we left Daytona, we didn't have the pace on track, and we made a couple of mistakes in the pits. We went back to the shop and analyzed everything we did. I think it went quite well. It's awesome man. To be able to complete every single lap out there is more than just us drivers, it's the whole team. We're always trying to improve no matter what we're doing. If we don't improve, we learn how to minimize our mistakes. If we do that, it will pay off at the end of the year."

"It was very special to check this one off the list. We couldn't have done it without a flawless car. It's pretty amazing what our guys are doing at the shop to give us this car. The car was consistent, it was still improving over the length of the race."

"This is a place that's been pretty mean to me many times. I remember losing here with Peugeot when we got a puncture with just two hours to go. Winning in Prototype with a lap on the field – on pace – doesn't happen very many times."

"We started at Daytona and won it. It was a tough race there. This one we came in a little more confidently. We don't want to be overly confident, but we felt it was our race to lose. We were pretty much in control of it the entire race. It was tight, but it was our race to lose. My first stint was more than three hours, and I led quite a bit myself, which was really nice. We had no mechanical issues whatsoever. It worked a little better in the cooler weather, and in the evening, it just came alive. It was awesome."

"I'm just happy to be here. It was cool to finish off my first stint in the lead by a lot. (Team owner) Brent (O'Neill) called me up last Thursday. He needed a driver, and I was definitely ready to come. I'd love to do more races – I'd love to do the season. My dad (two-time Sebring overall winner Derek Daly) isn't here – he's busy back home."

"You couldn't ask for a better start to the year. We came out with the new C7.Rs last year. We had the speed, but worked through some gremlins. The team has done a fantastic job with the cars. We've run the first 36 hours without a single problem. We've done all the pit stops with just fuel and tires and drivers. For that kind of preparation the team has done an amazing job and I'm thrilled to be a part of it all. I've got some real quality races on my plate this year. We're off to a great start."

"Daytona was a big disappointment and I hoped to make it up here. Also for the championship, it's going to be tough. Let's try to win some races and hopefully a big one like Petit (Le Mans)."

"From 25 minutes to the end of the race, I lost the front brakes. I locked up once with no brakes on the front. I went off the track. I thought it was over. Then I saw the Viper on the back straight going slowly. At that moment I knew we were back in the lead, and I just had to save the car to the end."

"This (No.) 23 Alex Job team is so great. It's a team where everyone is really working with each other. We might not be the fastest team out there, but the team worked hard. I'm so happy to be here and get another win. We were right on the pace in Daytona. We had a mechanical failure and couldn't finish there. Last year, we always had the pace to compete and made some bad decisions as well. This year, we'll do the same but work even harder."

*Driver in car at finish