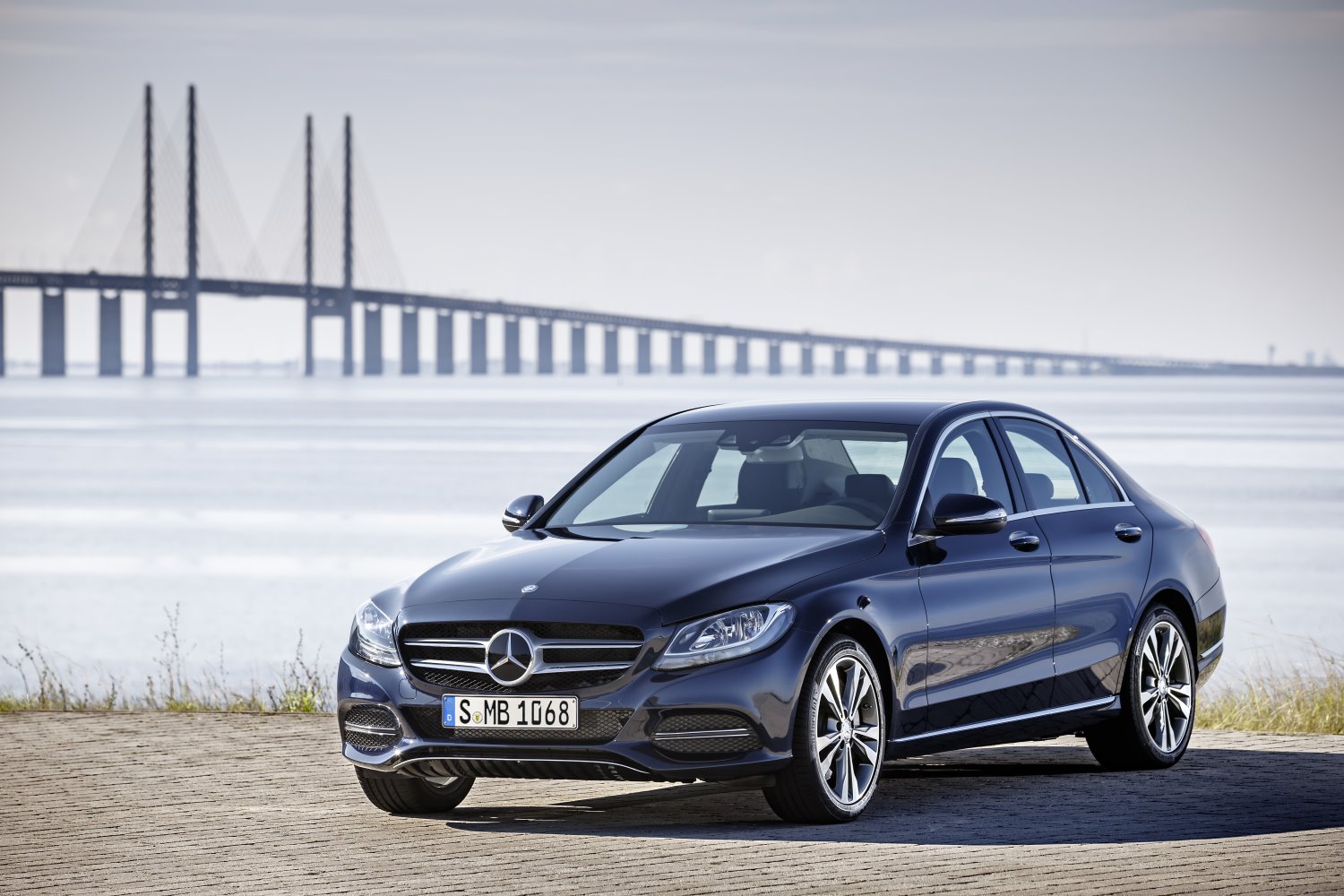 Extra impetus for the Mercedes-Benz strategic hybrid initiative: In the run-up to 2017 the company is bringing out a total of ten plug-in hybrid models, i.e. one new model with high-tech hybrid drive every four months on average. Following the successful launch of the S 500 PLUG-IN HYBRID, this month will see the C 350 e, the second model to feature the progressive drive concept, find its way to dealerships.

And what might happen next with the strategic hybrid initiative has just been demonstrated by the Concept V-ision e study at the Geneva Motor Show. Under the new Mercedes-Benz nomenclature, an "e" replaces the words PLUG-IN HYBRID.

"Plug-in hybrids are a key technology on the road to the local emission-free future of the automobile," emphasizes Prof Dr Thomas Weber, member of the Board of Management of Daimler AG and responsible for Group Research and Mercedes-Benz Cars Development. "Plug-in hybrids offer our customers the best of both worlds; in the city they can drive in all-electric mode, while on long journeys they benefit from the combustion engine's range. In addition, hybridization makes the combustion engine more efficient and brings with it a special type of dynamic performance – making driving an absolute pleasure."
[adinserter name="GOOGLE AD"]As the plug-in hybrid comes into its own especially in larger vehicles and with mixed distance profiles, Mercedes-Benz is opting for this drive concept from the C-Class upwards, which means that this key technology will make its entry soon into the SUV segment with the new Mercedes-Benz GLE.
With plug-in hybrids, Mercedes-Benz Cars is stepping up its drive to reduce CO2 emissions: at 129 g/km, the European fleet value for 2014 was once again 5 g lower than the year before. This is equivalent to an average consumption of 5.1 liters/100 km. This means that the company has lowered the CO2 emissions of its fleet in Europe by over 40 percent within two vehicle generations.
The strategic hybrid initiative is decisively facilitated by Mercedes-Benz's intelligent modular hybrid concept, which is scalable to allow it to be transferred to a large number of model series and body versions as well as left and right-hand drive variants.

With the Concept V-ision e, Mercedes-Benz has just given a preview at the Geneva Motor Show of the versatile development potential of the V-Class, a further model series that enjoys powerful propulsion thanks to modular plug-in hybrid technology. The highly efficient twin power source of petrol engine and electric motor delivers a system output of 245 kW (333 hp) with a system torque of up to 600 Nm. This guarantees sporty performance – with a standard consumption of less than 3.0 liters of fuel per 100 kilometers. An all-electric range of up to 50 kilometers turns day-to-day short-distance driving into an enjoyable local emission-free experience. In the interior, the Concept V-ision e offers a unique feel-good atmosphere with a modern loft character.
The largest panoramic glass sunroof in the mid-size van segment ensures an extensive light-flooded space which, in combination with bright, white trim and a brown real-wood floor, conveys a previously unknown feeling of expanse, freedom and airiness. Numerous additional new comfort features, such as executive seats with calf support, massage function and footrest in the rear or a large center console with heated cup holders and five-liter refrigerator box, provide further scope for individualization of the V-Class.

The first model to sport the new "e", the new Mercedes-Benz C 350 e is a plug-in hybrid that combines extraordinary levels of efficiency, dynamism and comfort. In either the saloon or estate variant, the performance of a sports car makes it a convincing proposition, especially in combination with a certified consumption of just 2.1 liters of fuel per 100 kilometers and an all-electric range of up to 31 kilometers. Its four-cylinder petrol engine, in conjunction with a powerful electric motor, gives it a total system output of 205 kW (279 hp) with a system torque of 600 Nm. Both the saloon and the estate model are equipped with air suspension and a pre-entry climate control system as standard, delivering a unique level of driving and climate comfort. The price of the C 350 e starts at 50,961.75 euros (Saloon) or 52,627.75 euros[1] (Estate). Both vehicles are at dealerships from March 2015.
S 500 PLUG-IN HYBRID: luxury saloon with exceptional efficiency
The S 500 PLUG-IN HYBRID blends an ultramodern hybrid drive configuration with the unique innovations and luxurious equipment and appointments of the S-Class. This long-wheelbase luxury saloon impresses with its exceptional dynamism and efficiency. Thanks to the standard-specification pre-entry climate control system it also offers outstanding climate comfort. With a system output of 325 kW and 650 Nm of torque, the Mercedes-Benz S 500 PLUG-IN HYBRID accelerates from 0 to 100 km/h in 5.2 seconds while boasting an all-electric range of up to 33 km. The certified consumption is 2.8 liters/100 km, which is equivalent to emissions of 65 g CO2/km. The Mercedes-Benz S 500 PLUG-IN HYBRID is available from a price of 108,944.50 euros.

Like all Mercedes-Benz vehicles, the hybrid models of the C and S-Class come with environmental certificates. These document the models’ environmental performance from development through to recycling, across the entire life cycle, and the performance is certified to internationally recognized standards by independent experts.
With regard to CO2 emissions, the certificate attests the following for the C 350 e: "Over the entire life cycle, comprising manufacture, use over 200,000 kilometers and recycling, there are clear advantages compared with the C 250. External charging with the European electricity mix can cut CO2 emissions by around 29 percent (9.6 tons) compared with the C 250 petrol-engined model. The use of renewably generated hydroelectricity allows a 41 percent reduction (15.1 tons)."

Extensive know-how in the field of hybrid and electric vehicles

In 1982, at the same time as it was launching the Mercedes-Benz 190, the predecessor of the C-Class, Mercedes-Benz also presented the first concept vehicle with a hybrid drive in which the battery was charged by a two-cylinder horizontally opposed engine. A number of other experimental vehicles followed until in 2009 the world's first standard-specification hybrid drive with lithium-ion battery made its debut at Mercedes-Benz: for a long time, this S 400 HYBRID was the most fuel-efficient petrol-engined luxury saloon and the most successful hybrid in its segment.
The second-generation hybrid transmission evolved on the basis of the 7G-TRONIC PLUS automatic transmission. It premiered in 2012 in the E 300 BlueTEC HYBRID, the first diesel hybrid in the premium segment worldwide. By combining the efficiency of a diesel engine with the advantages of the hybrid drive, Mercedes-Benz set another milestone in the development of the automobile and advanced into consumption regions of 4 liters of diesel per 100 km in the luxury saloon segment.
After the E 300 BlueTEC HYBRID, S 400 HYBRID, S 300 BlueTEC HYBRID, C 300 BlueTEC HYBRID and S 500 PLUG-IN HYBRID, the C 350 e is the latest hybrid model from Mercedes Benz. In the years to come, the main emphasis as regards alternative drives will be on PLUG-IN HYBRIDS. The company is also a leading player in the field of all-electric mobility.
[adinserter name="GOOGLE AD"]Growing range: all current hybrid and electric drive vehicles from Mercedes-Benz Cars:
[1] All prices: sales prices in Germany, incl. 19 percent VAT