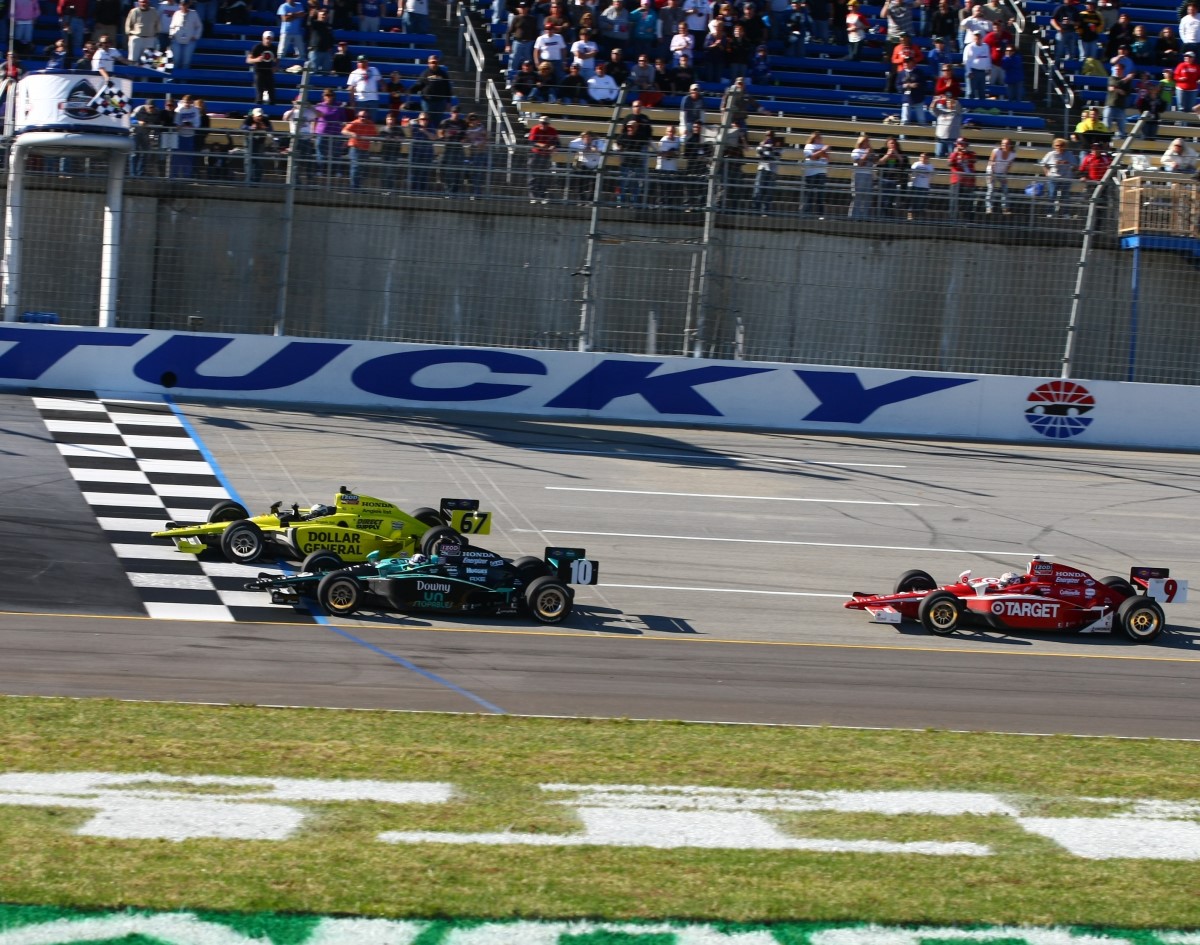 Although it's only been four years since the Verizon IndyCar Series has raced at the Sparta-based Kentucky Speedway, there has already been talk of bringing the series back to Kentucky following the success of the summer Sprint Cup event held earlier in July. However, in an interview with Mark Story of the Lexington-Herald Leader, track General Manager Mark Simendinger was adamant that there wouldn't be an event until the speedway was repaved.

For right now, what we have is too rough for them. Once (the repave happens), then it just becomes a question of cutting a business deal that makes sense for IndyCar and makes sense for us.

Given Kentucky's new golden status, an IndyCar event would actually be a pretty smart business decision. Given the right package, racing at Kentucky could be exciting and fun. However, with recent gripes regarding the prevalence pack racing in the IndyCar Series this season it would be a matter of opinion on what would work.

On one hand, a smoother, faster speedway would mean that pack racing would occur. These are light cars, much faster than stock cars, and they have a bad habit of getting airborne. Look at what happened at Fontana with Ryan Briscoe:

Following Briscoe's flip, drivers who were displeased with the pack racing seen at Fontana kept invoking Dan Wheldon's death at Las Vegas in 2011 to further drive home the point that they didn't feel safe, and rightfully so. They claimed that if this kept up, then another driver would be killed.

Kentucky (1.5 miles) is not as big as Fontana (2.0 miles), but if anyone remembers Kenny Brack's terrifying crash at Texas Motor Speedway in 2003, that doesn't make too much of a difference. Cars can just as easily get airborne. IndyCars also have a tendency to fly higher and farther, unfortunately.

However, despite all that pack racing is just another product of motorsports. It's going to happen. There will continue to be arguments on the matter and pleas for change, but that won't change the overall result. It's a lot like how some NASCAR drivers call for change regarding ways to somehow prevent cars from flipping or going airborne, but the fact of the matter is that nothing is going to stop it. It will happen.

Drivers have come a long way, as have cars, and track safety measures for that matter. Ask AJ Foyt and Mario Andretti the sort of action they were used to in the 60s' and 70s'. They'd more than likely say that what goes on today is nothing in comparison.

That's not to downplay the drivers' concerns. They're human. It's normal for them to be worried about possible outcomes. But it's the nature of motorsports in that anything can happen, anywhere, anytime. Repave or no repave, Kentucky or Milwaukee, the IndyCar Series is fast and unpredictable. If it isn't pack racing, it's something else to be concerned about.

So overall, an IndyCar event at Kentucky Speedway would be a good thing. Racing would be exciting and the crowd would be a good draw. It'll ultimately be up to the drivers on whether or not to go through with the deal once (and if) Kentucky decides to do a repave in the near future. Joseph Shelton/Beyond The Flag