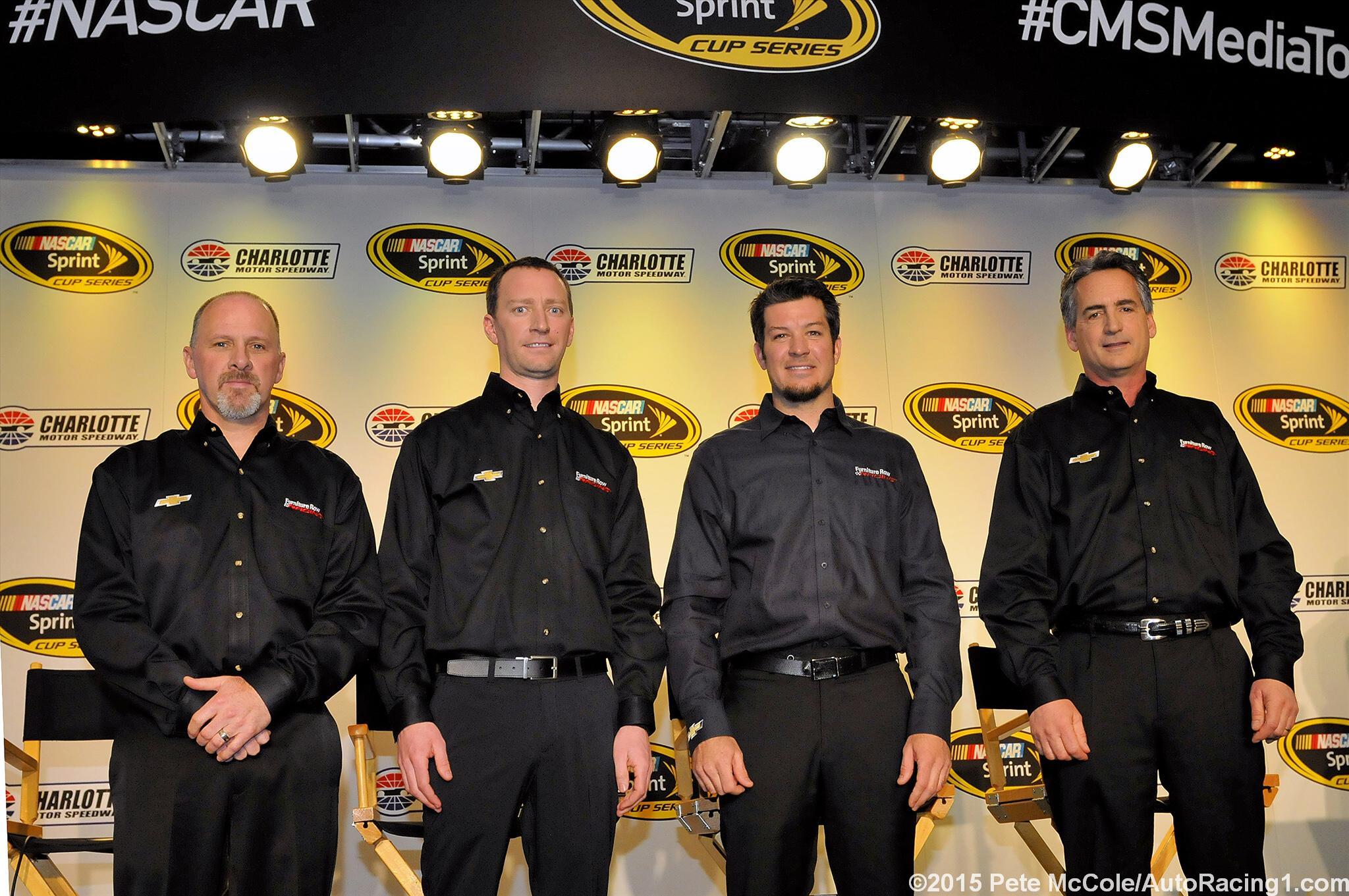 The 33rd annual Charlotte Motor Speedway Media Tour presented by Technocom drew to a close on Thursday, concluding four days of media and social events feature the top teams and driver of NASCAR as they prepare for the upcoming 2015 Sprint Cup season.

Leading off the final day was Furniture Row Racing, who made the trip from their Denver, Colo. based headquarters to the Charlotte Convention Center, joined by their current driver, Martin Truex, Jr.

Truex, Jr. endured a difficult season in 2014, with the team missing out on the Chase after tallying just one top-five finish and ending the year 24th in points. He also had to endure a hardship in his personal life, as his long-time girlfriend Sherry Pollex was diagnosed with ovarian cancer last year.

Fortunately, Pollex has responded well to treatment, completing her last chemotherapy treatment this past week.

"It seems like every day she's getting more back to normal and it's only been four days," said Truex. "It's been a tough road; it's obviously had some challenges. All in all, she did an amazing job. She's special. The way she was able to get through it, like no one has ever done before, was impressive and inspiring. It's going to make me work harder this year, that's for sure."

As one of the few teams not based in or around the Charlotte area, FRR faced some tough logistical challenges compared to some of the other single-car teams in the Sprint Cup Series, which is why their current technical alliance with Richard Childress Racing is important to their long-term success

"I don't see us as a one-car team, really," Truex said. "We have teammates with RCR and their other allied teams and I think that really worked well for us last year. Because of things we did that we didn't do well or we didn't do right, we couldn't take advantage of that team atmosphere but I thought it really worked well if we can do things right, and we started to see that at the end of the season. I feel like the teams worked well."

Following Furniture Row Racing was the team from Richard Childress Racing, who will return with seven-full time teams – four XFINITY Series and three Cup Series – and the same driver lineup in their Sprint Cup stable with Ryan Newman, Austin Dillon and Paul Menard.

RCR fell just one position short of winning the 2014 Sprint Cup title after Newman came in second behind race winner and Sprint Cup Champion Kevin Harvick in the season finale race at Homestead.

"I'd like to say we were one caution flag short," said team owner Richard Childress. "That's was history, we're looking at the future. We all know we have to win races to get in the Chase and that's our goal."

In a playoff format that emphasized winning to make the Chase field, Newman made into the 16-driver field without collecting a win, and nearly pulled off a miracle in winning the title having never made it to Victory Lane.

"We did the best we possibly could and came up a little bit short, but I have no regrets about any part of it," Newman said. "I think we all did an awesome job to get to where we were. Our theory was always fight and we never quit fighting and we never will. I know that if and when we win, it's going to be spectacular."

Up next on the tour was the team of Chip Ganassi Racing with Felix Sabates and their stable of drivers, which included Sprint Cup stars Jamie McMurray and 2014 Sprint Cup Rookie of the Year, Kyle Larson.

McMurray and Larson were on hand for Thursday events just four days after helping the Ganassi team take the victory in the Rolex 24 at Daytona along with IndyCar drivers Scott Dixon and Tony Kanaan, proudly showing off their shiny new Rolex watches for the photographers.

The Rolex win was historic for McMurray, who joined A.J. Foyt and Mario Andretti as the only drivers to win both the Daytona 500 and the Rolex 24.

"It's surreal to me to get to be mentioned with those two guys with the amount of races they've won and what they've accomplished," said McMurray. "To be able to win it is really quite unbelievable. After winning the Daytona 500, each year that I went back to Daytona, someone in the media has told me there's only been two guys who have won both of the race. So this year, when it came down to two or three hours to go I actually went up and stood on top of the pit box and I realized it could happen this year. And for it to all come true, it's crazy."

The Rolex 24 victory certainly helped the mood at Ganassi Racing after both of their Sprint Cup teams were shut out of the win column – and shut out of the Chase – with the exception of McMurray's win in the non-points Sprint All Star race last May. A disappointing season that Ganassi hopes not to repeat in 2015.

"When you look back on 2014, the first question out of many of you is 'what did you think of 2014?'. It wasn't exactly what we planned," said Ganassi. "We weren't in the Chase, and that's unacceptable. We obviously want to be in the Chase and we expected to be there last year, we expect to be there this year."

It was a sentiment echoed by co-owner Felix Sabates

"I've never guaranteed anybody anything in all the years I've been in racing," said Sabates, "but I'm going to guarantee both of these guys are going to make the Chase."

Closing out the 2014 media tour was Hendrick Motorsports, who brought along their driver lineup of Jimmie Johnson, Dale Earnhardt, Jr., Kasey Kahne, and Jeff Gordon – who was marking his final media tour after his announcement last week that he was retiring at the end of the 2015 season.

Team owner Rick Hendrick said he managed to talk Gordon in staying a few more years in the past, but "ran out of lines" in his sales pitch this time around.

"This is totally Jeff Gordon's way he wants to do it. He's ready for the next chapter. Selfishly, I'd like to hold on but you know the day has got to come."

[adinserter name="GOOGLE AD"]"I'm just so thankful to Rick," said Gordon. "I mean, he gave me a chance, you know – I was a young kid – to be a part of this organization. And to know that I've always driven for him throughout my whole career and the success that we've had together and the friendship, partnership, a lot of great, great moments. I just couldn't be more thankful."

Hendrick Motorsports announced during Thursday's event that 2014 XFINITY Series champion Chase Elliott would take over as driver of the no. 24 car in 2015.

"I don't look at it as me trying to fill somebody's shoes or me trying to replace Jeff Gordon, because I don't think you're ever going to replace Jeff Gordon, I think that's the best way to look at it for me," said Elliott. "I'm looking forward to learning as much as I can from him; he's a guy that there's a lot to be learned from, so hopefully I can make the most of that."