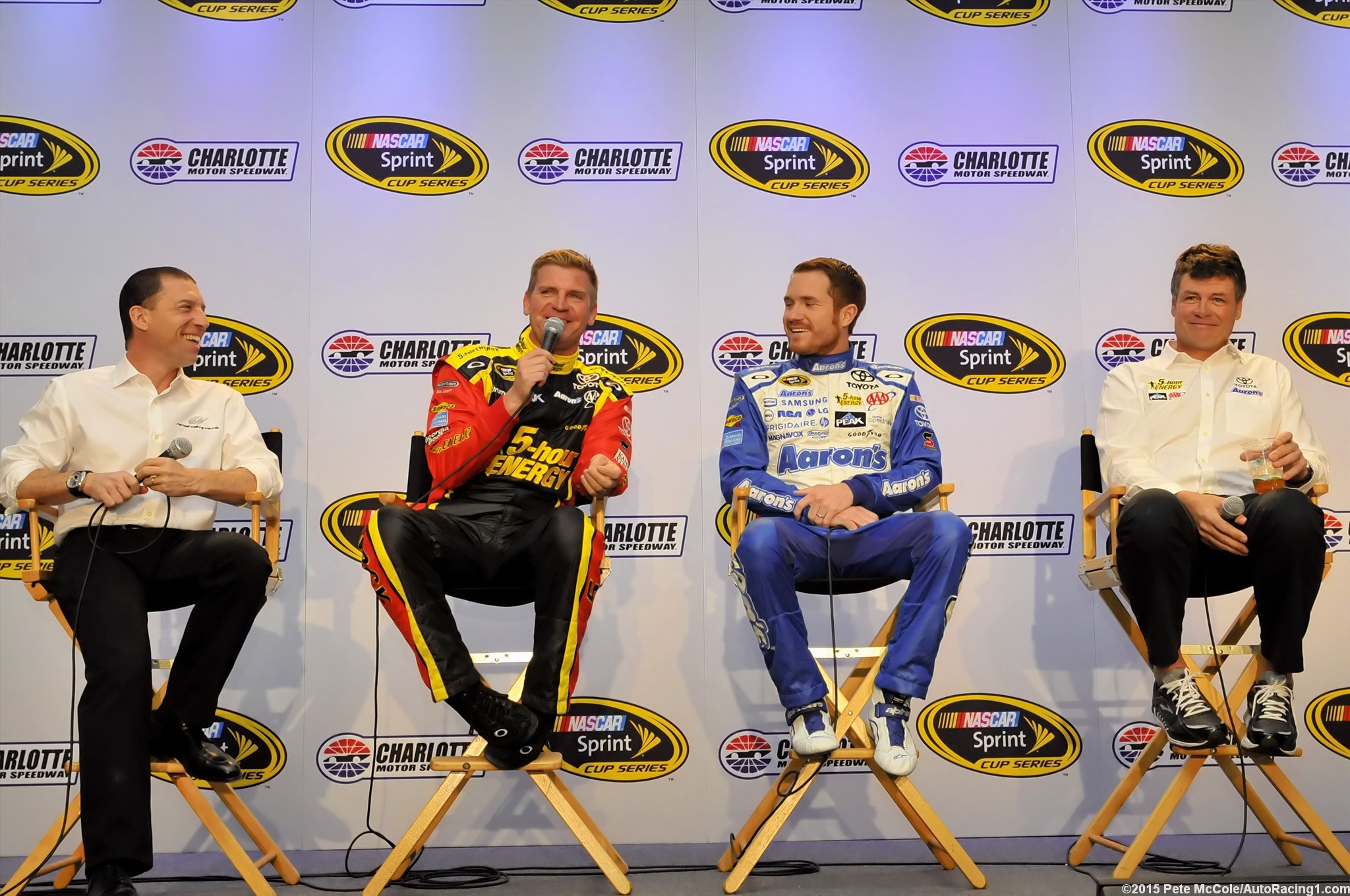 The Charlotte Motor Speedway Media Tour presented by Technocom continued on Tuesday with day two of the annual four day gathering bringing the media together with the stars and race teams of NASCAR.

On the slate for the second day were Michael Waltrip Racing, JTG Daugherty Racing & HScott Motorsports and Stewart-Haas Racing along with presentations from NBC Sports and Ford.

Michael Waltrip Racing led things off in the morning session with team co-owners Michael Waltrip and Rob Kauffman, along with drivers Brian Vickers and Clint Bowyer.

Vickers survived a scare in the offseason when he underwent an emergency procedure back in December to close a hole in his heart which will force him to sit out the first two races of the season.

Back in 2010, Vickers missed half the season after first being diagnosed with a hole in his heart as well as blood clots in his legs and lungs. Doctors placed a patch over the hole in his heart that his body has now rejected, necessitating last month's surgical procedure to replace it.

[adinserter name="GOOGLE AD"]Vickers has since recovered enough that doctors have medically cleared him to resume racing in March, and he expects to be back in the no. 55 Toyota for the March 8 Sprint Cup race at Las Vegas Motor Speedway.

"Reports of my demise have been greatly exaggerated. I'm still kicking," said Vickers. "I feel great. I'm just excited to be back for Las Vegas."

"The doctors say that I'll be as strong or better than I was before. I think from a health standpoint, my doctors have insisted on giving me enough confidence that I'll be healthy and ready to go and strong as ever. Mentally, how do I feel about it? I've gone through this several times now and I feel just fine, but until Las Vegas I won't know."

NASCAR has said they will grant a waiver to Vickers to allow him to be eligible for the Chase despite missing the first two races.

MWR has announced that Waltrip will drive Vicker's no. 55 Toyota in the season-opening Daytona 500, while Brett Moffitt will be behind the week the following week at Atlanta Motor Speedway.

Next up on the tour was JTG Daugherty Racing and HScott Motorsports, along with their drivers A.J. Allmendinger, Justin Allgaier and Michael Annett.

HScott Motorsports announced they are bringing Annett on board as driver for a new second team they will be adding for the 2015 season. The team has not yet decided on a crew chief or car number for the new team.

Annett joins the team following a year driving for Tommy Baldwin Racing, bringing his sponsor Pilot Flying J with him to HScott Motorsports.

"This opportunity came up very late, but it was one I couldn't pass up," said Annett. "There's going to be some growing pains, but to be able to jump to an organization that I feel was really on a roll last year and is going to keep going and keep getting better is a big opportunity for me."

After 14 years of frustration trying to win a title driving for Richard Childress Racing, Harvick finally reached his goal in just his first season driving for SHR, taking his first-career Sprint Cup with a victory in the season-ending race at Homestead to beat out Ryan Newman – who left Stewart-Haas to join RCR – along with Denny Hamlin and Joey Logano in the final race of the Chase.

It was a difficult decision that paid dividends for Harvick, who can now finally enjoy the media tour as a champion.

"It was very reliving (to finally win the title), just for the fact this particular event, you don't have to come here and say Ã¢â‚¬Ã·is this the year'", said Harvick. "We've been there, done that now. We feel like we're in a better position to compete for those championships and hopefully do that again just because of the fact that you have that experience."

Now, in his second year at SHR and with the championship under his belt, Harvick feels the pressure is finally off of his shoulders.

"There's way less pressure," said Harvick. "Coming into this situation last year, I was pretty nervous. There was just so many questions in your head. Sometimes you have to make some bold or hard decisions in order to make things like this happen

"I feel like we're way better prepared than we were going into the season last year. For me, I feel as comfortable as I ever have just for the fact that you don't have those expectations that you haven't lived up to. You lived up to them, you know how to do that, and you're going to continue to try to take that to the next level"

It hasn't all been an off-season of celebration for Stewart-Haas Racing, as Stewart still faces possible civil litigation following the fatal accident involving a sprint car driver back in August, and recent allegations of domestic violence levied against SHR driver Kurt Busch.

"I'm not happy about the last two years of my life, by any means," said Stewart. "I've never questioned who I am or what I do. We've had two rough years back to back which I wouldn't wish on anyone, but deep down inside I know who I am as a person and I know who I am as a driver and that's what I want to get back to. That what's make the start of 2015 so exciting for me – it's flipping the page and getting ready to get focused again on what we love doing."

Kurt Busch starts the season with a dark cloud hanging over his head as he continues to dispute the domestic violence allegations brought against him by his former girlfriend, Patricia Driscoll.

The Dover police have been investigating the incident but have not brought any charges against Busch, who has testified in court hearings that the allegations against him are completely false, and that he believed Driscoll to be a trained government assassin.

The Delaware Attorney General's office is still investigating, but Busch is adamant about his innocence and is eager to put the whole ordeal behind him and focus on the upcoming season.

"My right hand was on the Bible, and I swore under oath to tell the truth," said Busch. "Sponsors have been very supportive, the team has been has been wonderful. They all understand the situation and they know the people involved and they know the truth behind it.

"We'll see what the decision is here whenever (the attorney general) makes a decision. My focus is with the no. 41 Haas Automation Chevy what t takes to be fast on the racetrack. That's been my job all along is to win races. It's easy to sit here and feel refreshed about a season that's upcoming because of standing on the truth."