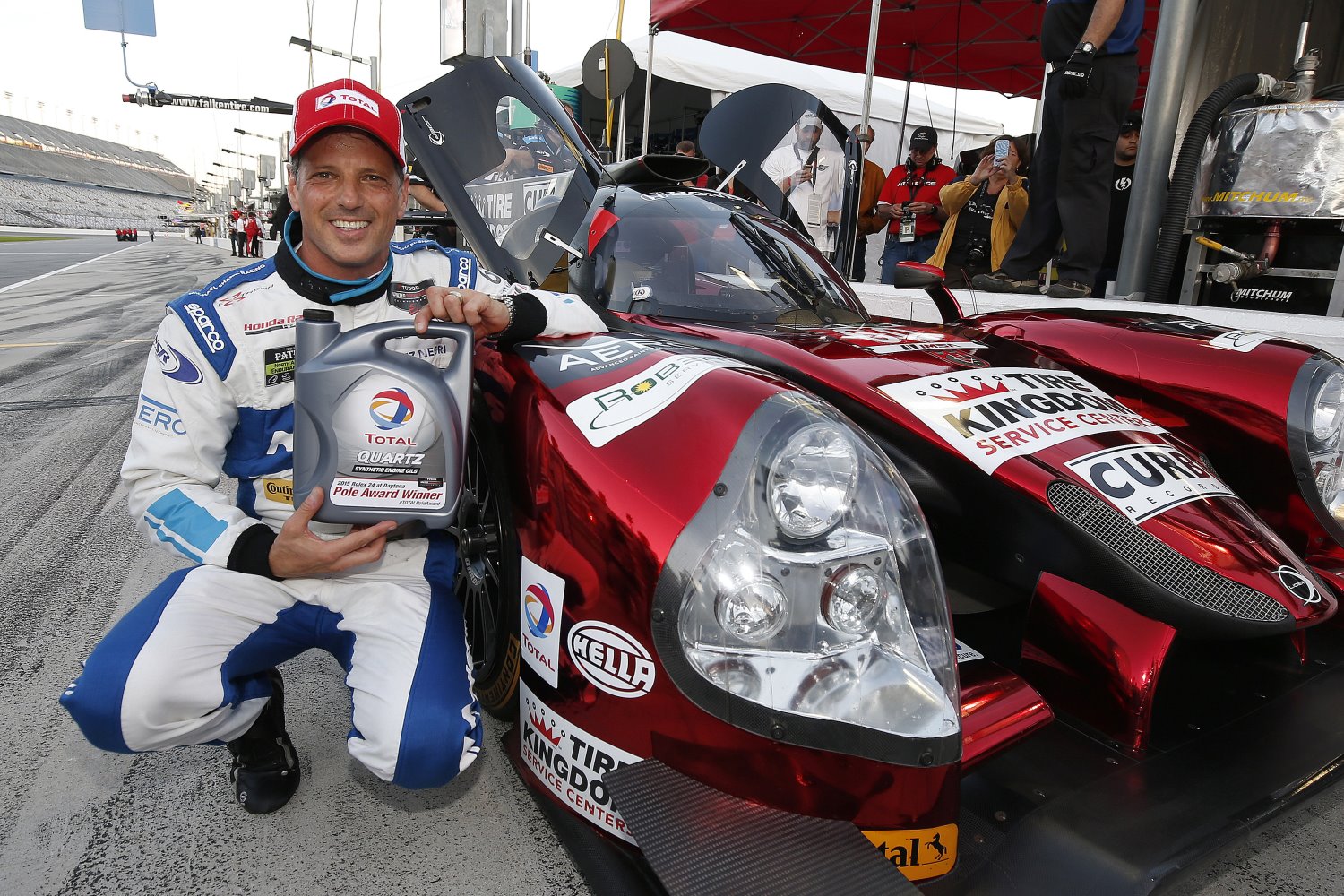 Michael Shank Racing will start the 53rd Rolex 24 at Daytona from the pole position, courtesy of Ozz Negri in qualifying Thursday.

The Brazilian recorded a best lap of 1:39.194 in his No. 60 Ligier JS P2 Honda in the 15-minute prototype qualifying session, edging out the No. 02 Chip Ganassi Racing Riley-Ford of Scott Dixon by 0.108 seconds.

It marked the first pole for a P2 car at Daytona and also in the team's debut outing with the Onroak Automotive-built prototype, following more than a decade of running DP machinery in GRAND-AM competition.

Negri will share the P2 entry with John Pew, AJ Allmendinger and Matt McMurry this weekend.

Dixon, who reeled off a 1:39.302 in his DP car, was second, followed by the sister Ganassi entry, qualified by Scott Pruett in third.

Defending Rolex 24 winner and Prototype class champion Joao Barbosa was fourth in the No. 5 Action Express Racing Corvette DP, while the No. 0 DeltaWing DWC13 of Andy Meyrick completed the top-five.

Olivier Pla made it two Ligiers in the top-six, driving the No. 57 Krohn Racing entry to a 1:39.683 lap time, followed by Ricky Taylor in the No. 10 Wayne Taylor Racing Corvette DP.

The top-seven qualifiers all broke the 1:40 barrier and were separated by less than seven tenths of a second.

Mowlem Captures PC Pole With Last-Lap Charge
Told he was running in the second position as he was about to begin his final lap in the Prototype Challenge (PC) session, Johnny Mowlem put his head down and ran a lap of 1:42.318 (125.257 mph). That was good enough to take the TOTAL Pole Award in the No. 16 BAR1 Motorsports ORECA FLM09 he co-drives with Tom Papadopoulos, Tomy Drissi, Brian Alder and Martin Plowman.

[adinserter name="GOOGLE AD"]"On my last lap, I left nothing on the table," said Mowlem, winning his first TUDOR Championship pole and third of his career in North America. "John Travis – my engineer – said 'Keep pushing, keep pushing.' So I took the 21-year-old attitude I used to have and threw caution to the wind. On that last lap I got it really hooked coming out of the first horseshoe, and I felt it could be a real good lap. Through the bus stop, I turned in, braked really late and got on the throttle. I held it flat and hoped it would hook up on the exit. It did, and I got pole."

Colin Braun, the 2014 Rolex 24 PC pole winner, briefly unseated Mowlem from the top spot near the end of the topsy-turvy session. He had to settle for second after setting a best lap of 1:42.498 (125.037 mph) in the No. 54 Composite Resources/Flex Box ORECA FLM09 fielded by CORE autosport. Braun will return with the winning PC lineup from last year's Rolex 24, joining Jon Bennett, James Gue and Mark Wilkins.

"I knew that the DPs were going to get pretty close to us in qualifying, especially with the cooler temperatures, and I knew it was going to take everything that car had," said Negri. "Mike was asking me for two tenths, three tenths, and I was wondering where are we going to find that?"

Gavin puts Corvette on GTLM pole
Oliver Gavin gave Corvette Racing its first pole at Daytona International Speedway since 2000, in the process extending an impressive streak that highlights the competitiveness of the GT Le Mans (GTLM) class, Friday in qualifying for the 53rd Rolex 24 At Daytona. With his lap of one minute, 43.488 seconds (123.840 mph) in the No. 4 Corvette C7.R, Gavin became the 12th different pole winner in 12 TUDOR United SportsCar Championship races, dating back to last year's Rolex 24 – the inaugural TUDOR Championship event.

"It's a very competitive class, I think they all are," said Gavin, who earned his first TUDOR Championship pole, his 21st career in North American endurance sports car racing. "That's the depth of the TUDOR United SportsCar Championship; there are plenty of great drivers and great teams out there.

"I have to thank (teammate) Jan [Magnussen]; he towed me around a lot on that lap and helped me get this pole position, so I have to thank him for that. I tried to repay him by towing him around for a few laps. I just had a little bit of extra straight-line speed."

[adinserter name="GOOGLE AD"]While several teams opted not to go out for the final minutes, Davison did and promptly put the No. 007 TRG-AMR LaSalle/Royal Purple/Orion Energy Aston Martin Vantage on the pole with a lap of one minute, 47.272 (119.472 mph).

"I'm blown away we ended up on pole, to be honest," said Davison, the leader in TUDOR Championship poles. "We waited in the pits and it went red, so I only had a lap to pull it off. Obviously the car was good and I hit my marks, but we were a bit lucky to pull it off."

The 53rd Rolex 24 At Daytona is the season-opening TUDOR Championship event and also the opening round of the four-race Tequila Patron North American Endurance Cup.

The 53rd Rolex 24 at Daytona gets underway Saturday at 2:10 p.m. ET, with live coverage on FOX. Flag-to-flag coverage will also be available on IMSA Radio.