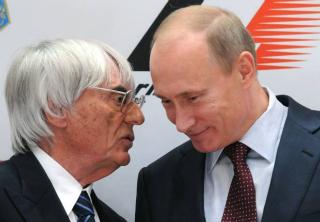 If the first part of our series outlining the governance of Formula One accomplished its goal, you came away with an appreciation and understanding of the complex, tangled web that is Formula One racing's ownership structure. You also are aware of how F1 Supremo Bernie Ecclestone in conjunction with a host of investors has built Formula One in a manner that allows him great say in the operation of the sport.

Of course, what we outlined earlier this week was merely the commercial structure of the sport. As extensive as the Formula One commercial empire is, Formula One Group, Delta Topco Ltd., SLEC Holdings nor any of the other companies comprising the vast empire sanction Grand Prix races. That is the role of Federation d 'Automobile, better known as the FIA.

Where the FIA intersects with Formula One's ownership group, the teams and other entities in the sport is the focus of today's article. We'll begin by outlining the general functions of the FIA with regard to motorsport before moving into its specific role and decision making authority in Formula One racing. And while this is meant to be mostly a neutral piece outlining the decision-making structure of the sport, at the end I will briefly offer some commentary, on how recent changes in F1's governing structure might affect the sport going forward.

Founded in 1904, the Paris-based non-profit association comprising "236 national motoring and sporting associations" represents "the rights of motoring organizations and motor car users throughout the world," and sees one of its "core responsibilities" as "the development of worldwide motorsport." Issues such as safety, mobility, and the environment for everyday drivers and motor racing are listed as matters the FIA promotes the interest of.

To carry out these goals, the FIA is divided into two main divisions, one for motorsports another for general motoring. Obviously, for our purposes today's focus will be on the motorsports division.

[adinserter name="GOOGLE AD"]And with respect to Formula One, the FIA directly sanctions the FIA Formula One World Championship. This can be contrasted to America's two top level motor racing categories, the NASCAR Sprint Cup Series, and the Verizon IndyCar Series. Both NASCAR and INDYCAR are affiliated with the FIA through its American auxiliary, ACCUS. ACCUS issues licenses, approves racing facilities, and makes sure that American race sanctioning groups such as NASCAR and INDYCAR are in compliance with FIA standards and regulations. And there are common matters where NASCAR and INDYCAR fall under the same ACCUS/FIA guidelines. One such example would be substance abuse.

We saw this a few years when Team Penske NASCAR driver A.J. Allmendinger failed a NASCAR-administered test. Because the failed test suspended Allmendinger's ACCUS-issued FIA license, Allmendinger's suspension was not just for NASCAR, but for any motor racing activity, which falls under the FIA umbrella either by direct or indirect sanction.

That said, while subject to FIA guidelines, it is important to note that both NASCAR and IndyCar have "in house" sanctioning so to speak. On the other hand Formula One, similar to the FIA World Endurance Championship, or FIA Formula E Championship, is directly sanctioned by the FIA.

In addition to sanctioning Grand Prix races, the FIA has significant power in determining the rules and direction of the sport, something it essentially has no such role with in NASCAR or INDYCAR. To illustrate this, let us look at the governing structure of the FIA: FIA President: Jean Todt has been President of the FIA since he replaced Max Mosley in 2009. The FIA President is appointed by the General Assembly. His main duties are to represent the group in matters with other organizations, and propose measures and changes to the organization.

General Assembly: Composed of over 200 members, the FIA General Assembly is the most powerful entity within the FIA. It discusses items brought forward by the FIA Senate, approves and appoints major FIA positions, and sets general guidelines for the association. Also, the General Assembly is convened in matters of expediency that need immediate attention.

International Court of Appeal: the final international motor sport appeal court. The ICA was created by the FIA, however it is independent of the FIA, and therefore is not listed above as part of the FIA chart.

FIA Senate: coordinates issues between the two major divisions of the FIA (automobile and motorsport), and handles issues that do not fall under the specific umbrella of the two major councils, specifically the finances of the FIA.

World Motorsport Council: decides on common rules, regulations, and safety for all levels of worldwide motorsport. It is a 27-member panel, which FIA President Jean Todt, Formula One Management CEO Bernie Ecclestone, and numerous heads of domestic auxiliaries of the FIA are a part of. This body has been rendered somewhat weak with the emergence of F1 Strategy Group (more on that below).

Wrapping up the FIA

Hopefully, the above gives you an idea of how the FIA is governed and structured. From a motorsports perspective its main purpose is to write rules and establish standards for motorsport worldwide. Below, we will see the role of the FIA with specific regard to Formula One.

F1 Strategy Group is a relatively new decision-making body, formed in late-2013 as part of an agreement with Ecclestone and the FIA, with the teams, Formula One Management and the FIA, having six seats each. The Strategy Group essentially replaced the Technical and Sporting groups, which had made rules and regulations for the sport previously, and which all teams had representation on.

By contrast, five teams (Ferrari, McLaren, Red Bull, Mercedes and Williams) have permanent spots of the F1 Strategy Group with the final spot a rotating one depending on performance in the Constructors' Championship.

Now, how exactly this new group came about is a source of great controversy. The FIA surrendered broad rule making authority in exchange for a one-time 5 million GBP payout and the ability to purchase a 1% stake in Formula One parent company Delta Topco for $450,000, although 1% of the company is considered to be worth around $66 million.

In essence (and this is merely a brief overview of the matter), the FIA, which had lost money for years surrendered decision making authority for a stake in the vastly profitable F1 empire. And reportedly (although not yet officially), the matter is being looked at by the European Union as a potential anti-trust matter.

Nevertheless, legal or illegal, ethical or unethical, F1 Strategy Group is the current structure by which the rules of Formula One racing are determined. And each constituent, (the teams, FIA and FOM) have 6 votes, which theoretically gives Ecclestone and Todt. But currently it is unclear how the members of the F1 Strategy Group are chosen. It is only clear which entities have seats.

The Group, for example, vetoed a proposed $200 million cost cap by the World Motorsport Council, double-points final race in 2015, and voted against proposed standing restarts.

So, with the new F1 Strategy Group, smaller teams have no say in the sport's rule-making?

Well, yes and no.

They do however have a seat on the F1 Commission (another organization that you will have trouble determining who is a part of), which includes all teams, promoters, suppliers, manufacturers, the FIA, and FOM. F1 Commission has the ability to approve or reject any measure enacted by the Strategy Group.

So theoretically, the small teams would have the power to veto any rule change introduced for 2015. However, they have no ability to influence discussions, nor power to vote on rule proposals for future years. There only power is to accept or reject measures drafted by the Strategy Group.

Reportedly, the most recent Concorde Agreement, which you will not find with a Google search, was a bi-lateral one, rather than between all three parties. In other words, Ecclestone apparently negotiated an agreement with the FIA, and a separate one with the teams. For a picture of how the Concorde Agreement works see below: Each party listed above has six seats on F1 Strategy Group. This group is checked by F1 Commission, which can reject or accept proposals. However, unlike before F1 Strategy Group has the ability to override measures enacted by the FIA's World Motorsport Council, which is fundamentally different than previously.

Now, that you have a working knowledge of how the politics of Formula One work, let it be known that the current rules making structure is a very unique one with the possibility of drastically changing Formula One going forward.

While the FIA still sanctions worldwide motorsport and administers rules and regulations on a given Formula One weekend, their ability to enact policy is divided equally with the teams and commercial rights holder. And already, the de facto veto power FOM and the six Strategy Group teams could use collectively against them has been exercised, as we saw in the Group's decision to forego the WMSC measure to institute a cost cap.

Yes, the Strategy Group effectively has veto power over the FIA, a scenario with no precedent in the sport's history.

Of course, the FIA still holds a power, smaller F1 teams do not: the ability to introduce reforms to the regulations.

This lack of recourse in policy making, and financial issues encountered by the teams in 2014, could result in the legality of the Group being challenged either through the courts or via investigation by the EU. And central to any legal proceedings or investigation will be the fact the FIA, a non-profit association established to oversee rules making in motorsport, surrendered some of its decision making authority in conjunction with taking an equity stake in Formula One and not paying anything close to market price.

Yes, these are trying times in the world of Grand Prix racing. And what the future holds is at this point anyone's guess.