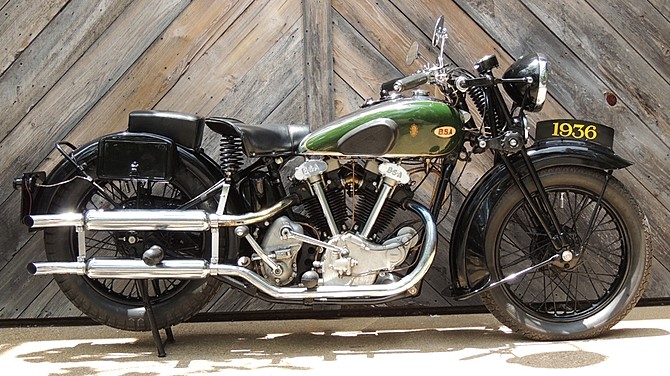 My true passion was for classic cars and historic racing cars… that is, until the summer of 2012 when I co-hosted Mecum's first major motorcycle auction in Monterey. That auction was my road-to-Damascus moment. My eyes were opened to the beauty, history and raw functionality of motorcycles.

As we approach Mecum's biggest bike auction ever at Las Vegas on January 8-10, my plan is to drag as many of my car friends as possible into the amazing world of bikes.

I openly confess that I am not a motorcycle expert, although I play one on TV. When I need a real-life, no-kidding bike expert I call veteran motorcycle journalist Paul D'Orleans, who will co-host the upcoming Vegas auction on NBCSN with John Kraman, Scott Hoke and myself. D'Orleans not only writes about motorcycles, he collects them, judges Concours d'Elegance and rides vintage bikes across the country in his spare time. The guy knows bikes.

So I asked D'Orleans for some reasons why car guys should become motorcycle enthusiasts. His response was convincing.

Reason Number One – You can see everything on a motorcycle.

"Unless you're a real tech head and you're going to get under the hood, cars are about shape and motorcycles are really about mechanics," D'Orleans said. "Everything is visible on most bikes until you get to the 1980s, when there was a real trend for covering everything up."

"I think anyone who's really interested in engineering should be interested in motorcycles because they are the most pure mode of engineering. And you don't have to ride them to appreciate them. Motorcycles have been made in one form or another since 1867 so there's a lot of intriguing development that happened, especially in the 20th century."

D'Orleans says, "They're more compact. You can actually keep one indoors without re-engineering your house. And if you're inclined, they are a lot of fun to ride. Even the old bikes. When you keep your expectations reasonable as far as what performance to expect, they're really rewarding."

[adinserter name="GOOGLE AD"]The compact nature of motorcycles is such that I am now re-designing Sopwith's office to feature my 1971 Honda as well as a second, yet-to-be-procured two-wheeled beauty. Why put pictures of awesome vehicles on the walls when you can park one in five feet of floor space?

Reason Number Three Motorcycles give you a lot more for your money.

"They're a huge value for the money in terms of collectability," D'Orleans said. "You can get something from a pedestrian commuter vehicle to a grand prix winner in the motorcycle world and it's not going to cost you the earth."

"There are lots of opportunities. If you can't afford a Vincent Black Shadow for a hundred thousand, for half the price you can get a Vincent Rapide which is almost an identical motorcycle that just doesn't have the black engine cases or a sexy name."

So what's your excuse? Join us for Mecum Las Vegas on January 8-10 at the South Point hotel, or watch the broadcast on NBCSN on January 12 at 7 pm Eastern.

You might just fall in love with motorcycles. I did.