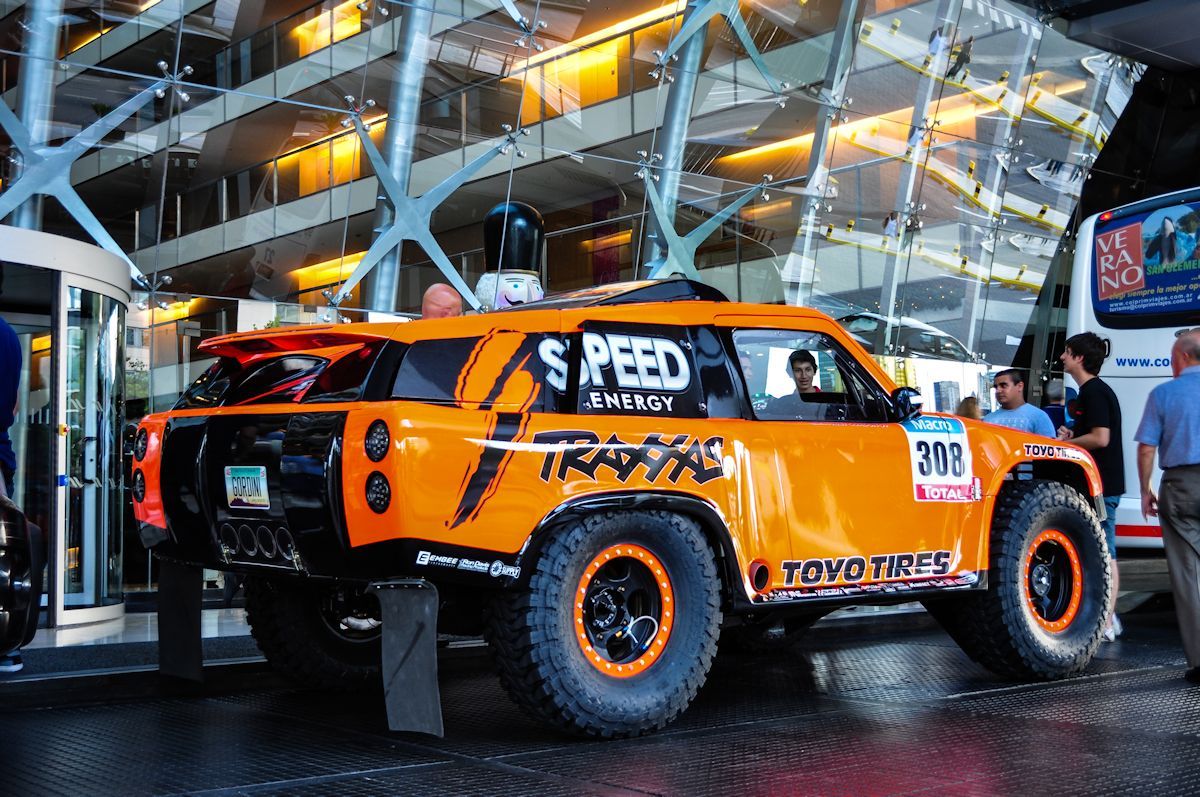 After a full year of work, thousands of miles of testing and countless all-nighters, Robby Gordon and his HST Gordini race car were reunited Monday in Buenos Aires, Argentina, in preparation for Sunday's start of the 2015 Dakar Rally – the world's most challenging motorsports event.

Over its nearly 30-year history, the Dakar Rally has become the ultimate test of both man and machine, allowing a select few the opportunity to claim victory in the ultimate international sporting challenge and thousands more – vehicles and competitors alike – beaten and broken in pursuit of glory.

Gordon, perhaps one of the greatest off-road champions of all time, knows the frustration and challenges of Dakar more than most. He knows his 11th attempt to become the first American driver to win the overall title remains a massive challenge for his single-car team against the multi-car efforts of operations supported by Mini, Peugeot, Toyota, Renault, Ford and others.

In total 665 vehicles will begin the 2015 Dakar Rally, with Gordon and navigator Johnny Campbell among 138 entries in the car class. There are an additional 164 in the motorcycle class, 48 quads and 64 trucks. Fifty-three nations will be represented in the field, with Gordon's effort being the only entry from the United States.

While racing against factory teams with budgets reportedly as high as $100 million is daunting, one thing the Californian never lacks is confidence.

"Like every year, our objective and our belief is that we can win the overall title," Gordon said. "We will race against some of the greatest off-road drivers and teams in the world, but if we didn't believe we could compete we wouldn't enter the Dakar. More than any other race we have ever entered, the Dakar is about teamwork, organization and execution. We believe we have the experience to win and a team that can execute. It will come down to me as the driver not making mistakes and every person on the team doing their job. This is the ultimate challenge."

That challenge consists of crossing 9,111 kilometers (5,661 miles) of desert terrain in Argentina, Bolivia and Chile over 14 days. Gordon is fond of saying that the Dakar Rally is like competing in 13 Daytona 500s or Indianapolis 500s on consecutive days, including rebuilding your car each night.

[adinserter name="GOOGLE AD"]The team's best finish came in 2009 when Gordon was third overall. He has accumulated 11 stage victories, including his first attempt in 2005, becoming the first American in history to record a stage win. In his previous 10 starts, Gordon has finished in the top 15 five times, giving the championship driver the confidence required for a race that took last year's winner Nani Roma more than 50 hours of driving time to complete.

"The Dakar Rally is such a huge race in virtually every country of the world and the United States is catching on fast," Gordon said. "More than 1 billion people will watch the race on television in 190 countries this year and millions more will be on site in South America. I can only imagine what becoming the first American team to win this race will do for its popularity in the United States. It's our goal to expose this great challenge to the passionate motorsports fans of the U.S."

In 2014 more than 3.9 million spectators lined the course in the most heavily populated areas of Argentina, Bolivia and Chile, and the crowd is expected to grow in 2015.

The team's effort will begin Jan. 3 in front of a massive audience on the steps of "La Casa Rosada," the presidential palace in Argentina for the annual podium ceremony. If tradition holds, Gordon will again stir the excitement of the crowd by backing his Gordini off the huge podium where the drivers are introduced and literally jump his car into the 2015 Rally just has he would one of his Stadium Super Trucks.

The pomp and circumstance of the Dakar Rally preliminaries will be replaced the next day with the first 833 kilometers of competition through the twisting roads of the Argentinean countryside.

Follow the Dakar Rally through live timing and scoring as well as live updates at planetrobby.com. NBCSN will provide daily highlights beginning Jan. 5 from 4:30 to 5 p.m. ET.

Buenos Aires to Villa Carlos Paz. 833 kilometers. 663 km Liaison and 170 km Special. The competitors will be rapidly plunged into the heart of the Argentinean countryside. The combination of the route's different features means there will be something for everyone, while sticking to relatively simple criteria, for the time being. Fast tracks coupled with sharp bends will divide up the vehicles, according to the levels of the drivers' skill.

Villa Carlos Paz to San Juan. 625 kilometers. 107 km Liaison and 518 km Special. The longest stage. Any rest will be short-lived, because before reaching San Juan, the competitors will have a particularly busy schedule: quite simply the longest special stage in the rally, which is varied enough to unsettle even the most experienced of drivers. Hard terrain at the start of the race will be followed by dusty sections in the middle of the day and a sandy stretch to finish. This is the first real test, which can only be successfully overcome through constant vigilance.

San Juan to Chilecito. 542 kilometers. 258 km Liaison and 284 km Special. The pressure which competitors faced the day before (and late into the night for some of them), will partly ease off on the road to Chilecito. The shorter and less intense stage will allow them to enjoy their majestic surroundings. The red earth tracks, overlooking steep peaks and plunging down into canyons, will take the Dakar through one of the most beautiful regions of Argentina. With thousands of stones to be avoided, it will only take one to ruin this magnificent day.

Chilecito to Copiapo. 909 kilometers. 594 km Liaison and 315 km Special. The competitors will have to prove they are worthy of entering Chile! A very early start and a climb to a height of 4,800 meters will precede the border crossing at Paso San Francisco. The really challenging section will begin with a gradual warm-up on the mining tracks, before drivers are faced with the reality of the Atacama Desert. The route here is open and sandy. Over the course of the last 40 kilometers, the giant dunes and basins of Copiapo will have to be tackled and for many this will be at night. Overcoming them will require finesse and instinct.

Copiapo to Antofagasta. 697 kilometers. 239 km Liaison and 458 km Special. At the start of the race, the most confident drivers will be able to take advantage of the fast tracks to try to move up in the overall standings. But the temptation to do so may be risky, particularly in the hard-to-handle fesh-fesh areas where absolute self-control is the only guarantee of success. Overtaking here requires precision handling to the extreme.

Antofagasta to Iquique. 647 kilometers. 392 km Liaison and 255 km Special. The route will climb up the Pacific coast towards Iquique and run alongside the coastline. For the first time, the half-way point in the race will be marked on a podium in the center of Iquique. The encounter between drivers and their fans will be emotional, following the earthquake which affected the region at the start of the year.

Iquique to Uyuni. 717 kilometers. 396 km Liaison and 321 km Special. Numerous difficulties will mark the first part of the Bolivian marathon stage. From the outset, the long liaison section will mean an early start, followed by a gradual climb to a height of more than 3,500 meters. Once on the high plateau, the special stage will begin, with instructions to follow the roadbook with great care, in light of the large number of junctions on the route. One of the challenges of the day could be wear and tear on tires. Once they have arrived in Uyuni, the competitors will only have completed half of the marathon stage.

Uyuni to Iquique. 805 kilometers. 24 km Liaison and 781 km Special. The Dakar bows to the laws of nature. Hence, the weather will decide which route will be taken to leave Bolivia. If it's dry, the start could take place in the Salar de Uyuni, for a 100km route across a smooth road of white salt: full throttle and foot to the floor. The route then slows down abruptly, with the longest part of the special stage taking place on more technical mountain terrain. The day will end with more than 40km of dunes, concluding with the high descent to Iquique.

Rest Day — Jan. 12. No competition for the Car division.

Iquique to Calama. 539 kilometers. 88 km Liaison and 451 km Special. For this farewell session to the Atacama Desert, the drivers will face approximately 50 kilometers of demanding sand dunes. Despite these challenges the drivers should enjoy the stage because the next stage will put both drivers and their teams into much less comfortable positions. The routes have suffered the rages of time and will be harsh on them: frequent potholes and bumps combined with the narrowness of the tracks will expose their vehicles' bodywork to damage.

Calama to Salta. 860 kilometers. 501 km Liaison and 359 km Special. After the Chile-Argentina border, the day's special stage will start on the Salinas Grandes, more than 3,600 meters above sea level. The altitude should curb the competitors' enthusiasm and cool down their engines. The more technical final phase will separate the toughest of them from the rest. For the liaison section, the route will then follow the Paso de l'Acay, at an altitude of 4,970 meters.

Salta to Termas de Rio Hondo. 520 kilometers. 326 km Liaison and 194 km Special. The rally will continue on two separate routes, following the famous Ruta 40 and winding through its magnificent landscapes. Drivers won't have time to relax on these fast routes though: the fatigue which will have accumulated by the 11th day of the race will demand maximum concentration on both the route and the road-book. In the cockpits of the cars, the watchword will also be vigilance; these tracks are often lined with trees.

Termas de Rio Hondo to Rosario. 1,024 kilometers. 726 km Liaison and 298 km Special. The Dakar will spend the night near the Termas de Rio Hondo circuit, which regularly hosts the Argentine rounds of the GP and WTCC motorcycle championships. The Dakar's competitors are set for a cross-country journey, battling it out in this tension-packed penultimate day. A combative driver could still shake up the leaders' positions even at this stage. And drivers who become too distracted could be caught by surprise by the surrounding vegetation.

Rosario to Buenos Aires. 393 kilometers. 219 km Liaison and 174 km Special. None of the drivers in the Dakar consider it over until they reach the end of this final day; and for good reason, because every year at least one competitor retires during this final stage. Caution is the name of the game on the fast tracks of the special stage, at the very least for those who haven't got a position to defend.