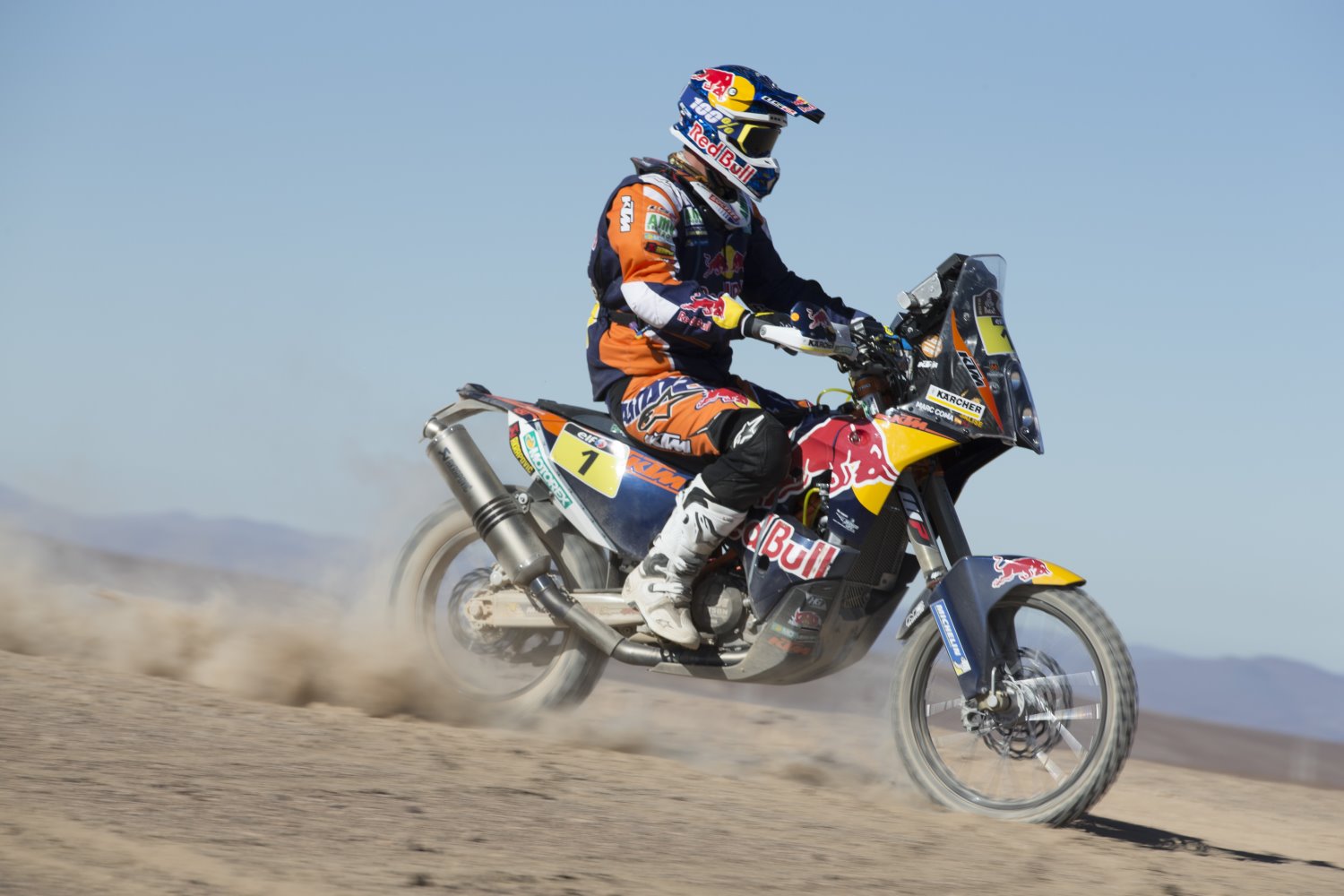 216. The number of competitors who managed to finish the 2015 Dakar (79 motorcycles, 18 quads, 68 cars and 51 trucks) out of the 420 which started the rally. Two of them, Ivan Jakes and Robby Gordon, won the final stage in the motorcycle and car categories, respectively. However, the spotlight was on Marc Coma, who drew upon his experience to take his fifth Dakar, and Nasser Al-Attiyah, who claimed his second one after dominating the entire two-week rally.

Marc Coma is now level with Cyril Despres, a fact which will please the Frenchman's eternal rival at the Dakar to no end and just like his former teammate puts him just one triumph away from the record held by legend Stephane Peterhansel. Their equal number of wins takes on a special dimension considering the dominance of the two men throughout the last ten editions of the Dakar, as well as the good-natured competition which fuels their ambition.

For the first time in ten years, Despres was not there to take the fight to Coma, having switched to the car category this year, but the Spaniard still had to fight tooth and nail for his resounding victory in Buenos Aires… As in 2014, Joan Barreda was clearly the toughest rival the KTM rider came up against in Argentina, Chile and Bolivia. The HRC rider won stage 2 with the added bonus of the overall lead, opening a crucial 12-minute gap thanks to the latter's tire problems.

[adinserter name="GOOGLE AD"]From the very next stage, the two Spaniards played cat and mouse, riding together and taking turns to claw back the two minutes separating them at the start of the special. This little game lasted several days to the benefit of Barreda, who looked like he had finally acquired the experience needed to fight for victory until the end without making any mistakes.

However, Coma bided his time like a feline waiting to pounce at the slightest opportunity. Marc found an opening in stage 8 after his Spanish rival suffered a mechanical. The no. 2 Honda, damaged by the crossing of the waterlogged Salar de Uyuni, had to be towed to Iquique by Jeremias Israel Esquerre.

This decisive turn of events gave Marc Coma the reins of the rally, which he kept until Buenos Aires. However, the KTM rider still had to see off a determined Paulo Goncalves who was out to avenge the honor of the world's leading maker, thwarted by its Austrian nemesis for the third time since its official rally raid comeback. The Portuguese rider never gave up, but he finally had to settle for a well-deserved second place.

As well-deserved as amazing Toby Price's third step on the podium. The 27-year-old rookie from Down Under will be worth keeping an eye on in upcoming editions. The KTM rider claimed stage 12 and kept getting stronger as the race went on, pulling off an impressive streak of eight top 5 places and bested Pablo Quintanilla for third place at the end of the rally, making him the best rookie since his fellow countryman Andy Haydon in 1998.

However, his Chilean rival has good reason to be happy with his rally after having to withdraw from his first two editions of the Dakar, winning the grueling eighth stage. He too will probably come back with loftier goals in 2016. Among those who did not make it to the finish, Sam Sunderland will be seeking to bounce back and gain consistency in 2016 after winning the first special this year, just like Matthias

Walkner, who also won a stage in his maiden Dakar and represents the new generation of rally raid together with Price. Laia Sanz did reach Buenos Aires and showed flashes of brilliance throughout the 2015 edition, claiming a fantastic fifth place in Iquique and, even more importantly, ninth overall, up there with the big guns. The pretty Catalan even beat Olivier Pain, who barely had any presence in the race for the Yamaha clan.

Nasser Al-Attiyah won the first stage but was handed down a time penalty for speeding in the link section. No big deal for the Qatari. He had sent his rivals a clear message: this was going to be his year. The Mini driver rammed the message home the very next day, taking an undisputable and undisputed stage win, the first of an impressive set of five wins which shows just how far ahead of the competition Al-Attiyah was in the 37th Dakar.

The newly crowned two-time champion of the most prestigious rally on Earth took the overall lead at the end of stage 2 and kept it until the end. He never even hesitated, racking up one win after another instead of simply defending his lead even when the slower-but-steady Giniel de Villiers piled the pressure on him. The Toyota driver, second in Buenos Aires, was the only man who challenged the no. 301 Mini until the end (finally losing by 35 minutes). Only a stage victory could have made the South African 2009 winner of the Dakar's performance even better.

Nani Roma, on the other hand, did take stage 9. However, the 2014 champion's dreams of overall glory were already shattered, as his supposedly ultra-reliable Mini suffered a mechanical a few kilometers into the opening special. The Spaniard ended up rolling out of the rally with four days to go, just like Carlos Sainz during stage 5. With the former WRC champion gone, StÃƒÂ©phane Peterhansel was left to fly the Peugeot colors alone in the rally comeback of the brand with the lion. The Frenchman's bid for glory failed and he had to settle for bringing his 2008 DKR to Buenos Aires, just like Cyril Despres in his baptism of fire on four wheels.

Orlando Terranova was also disappointed in the 2015 edition, but even though he was knocked out of contention in stage 4, he set an infernal pace throughout the rally. The Argentinean grabbed four stages and would have probably been a strong contender for the overall win with some more luck. Lady Luck was just as mean to Yazeed Al-Rajhi, who produced an awesome performance until stage 11, which he never even managed to start due to a mechanical problem a few kilometers before entering the special.

[adinserter name="GOOGLE AD"]The Saudi winner of stage 8, who was sitting third overall before withdrawing from the rally, will be worth keeping an eye on in 2016. Al-Rajhi's pain was Krzysztof Holowczyc's gain, as the Pole celebrated his tenth participation with a much awaited podium place, 1 h 32Ã¢â‚¬Â² behind the unassailable Al-Attiyah.

In the quad category, Rafal Sonik finally tasted glory in his sixth Dakar start, following four top 5 finishes. The Pole hit the ground running, but he spent a big chunk of the rally battling Ignacio Casale, who was determined to make it two in a row after his brilliant victory in 2014 – Chile's first at the Dakar. Casale won the first two stages and put his cards on the table, locked in a fierce battle with Sonik until a mechanical problem in stage 10 sent him home.

The same special also eliminated Sergio Lafuente, opening a gap of almost three hours between the leader and second-placed Jeremias Gonzalez Ferioli, who grabbed his first special at the young age of 19! Christophe Declerck's two amazing stage wins thrust him into the limelight as the only French stage winner at the 2015 Dakar.

Finally, Kamaz's grip on the truck race remained as strong as ever. The Russians were light-years ahead of the competition, pulling off a jaw-dropping 1-2-3-4 in the general classification! Hans Stacey's win at the wheel of his Iveco in the first stage may have seemed a bad omen for the Russians, but despite racking up four stage wins, the Dutchman was left in the dust as Ayrat Mardeev and Eduard Nikolaev dueled for the overall.

Nikolaev won six stages and halfway through the race seemed on track to repeat his 2013 victory, but a calamitous stage 7 forced him to chase after the super-consistent Mardeev. In the end, Nikolaev simply ran out of road as he lost to his fellow countryman by 13 minutes in Buenos Aires. Ilgizar Mardeev's son made amends for his second place behind Nikolaev two years ago, while 2014 champion Andrey Karginov took the bottom step of the podium.