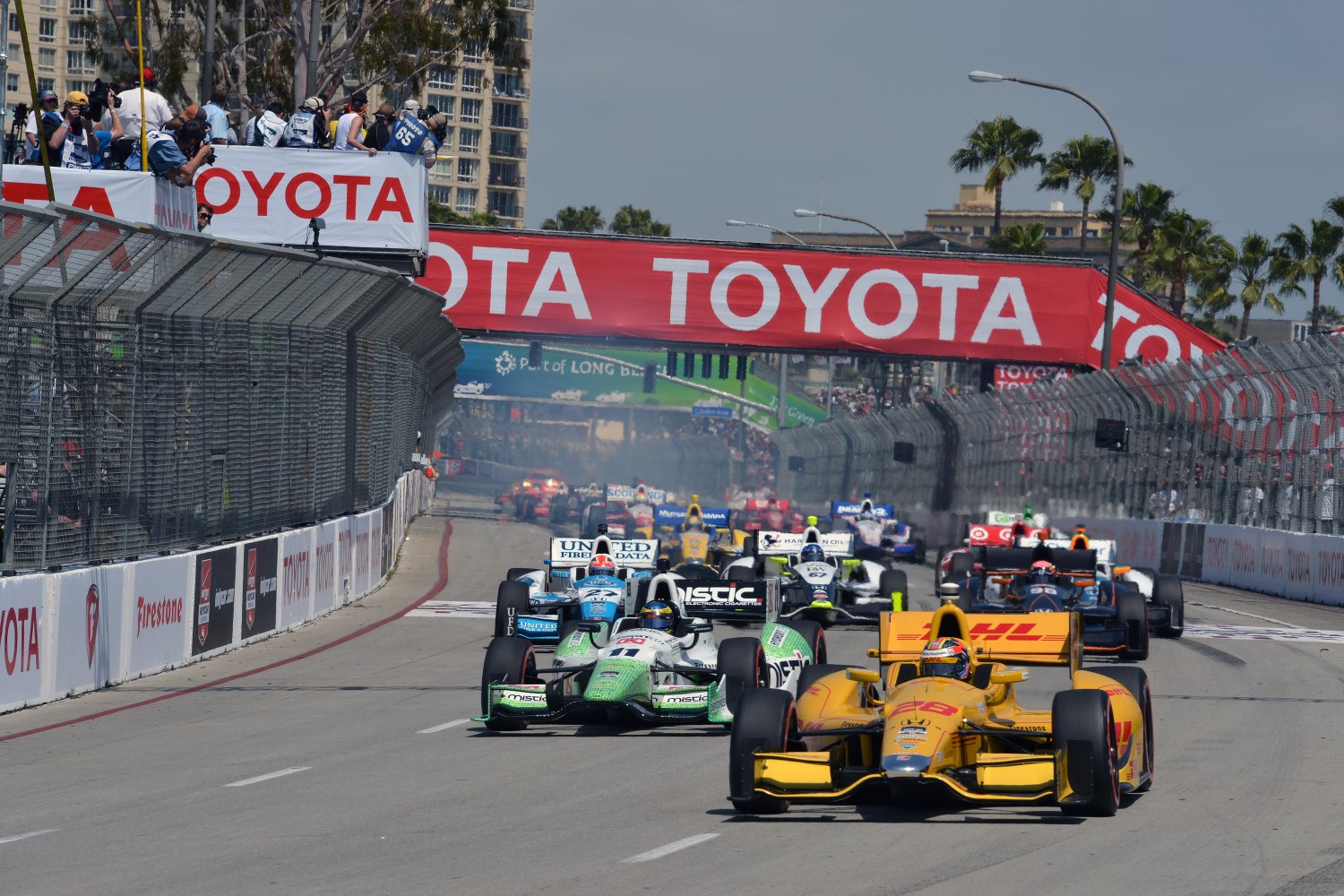 Earlier this month INDYCAR announced a series of rule changes, amongst them, the decision to eliminate standing starts for the 2015 Verizon IndyCar Series season.

Of course, throughout most of American Open Wheel Racing history, rolling starts have been the standard practice. Champ Car bucked the trend a select venues during its final season before it merged with the Indy Racing League in 2007.

Late in 2012, then INDYCAR CEO Randy Bernard announced that standing starts would be used at two races for the 2013 season. Last season, the measure was expanded to four events.

The results were generally speaking, mixed.

Events such as Honda Indy Toronto Race 2 in 2013 and last year's Toyota Grand Prix of Long Beach saw standing starts executed successfully as well. Unfortunately, that was not the case everywhere.

At Houston in 2013, James Hinchcliffe failed to get away at the start and was rear-ended while at a near standstill by an oncoming Ed Carpenter. Then last year, at the inaugural Grand Prix of Indianapolis, pole sitter Sebastian Saavedra stalled at the start, and was rear ended in spectacular fashion first by an oncoming Carlos Munoz then Mikhail Aleshin. Also, of note is Ed Carpenter Racing was again eliminated after a standing, with Mike Conway at the wheel this time getting caught up in the melee. Luckily, all drivers were okay.

For these reasons and others, INDYCAR announced recently that standing starts would not be part of the 2015 schedule. And recently, AutoRacing1 checked with a few of those within the sport, to get their reaction to the decision.

Now, before moving ahead, it should probably be noted that AutoRacing1 has long been a proponent of standing starts. For one, standing starts eliminate the inevitable issues of one driver possibly jumping the start. Further, presuming the anti-stall software is sound, standing starts are, despite the assertions of many, theoretically safer than rolling starts as the deceleration on tight, city street courses, is less than with cars coming to the green flag at speed. Last, anyone who has ever been trackside for a standing start can attest to the sense of anticipation it produces.

That said, what follows is intended primarily to be a neutral piece, presenting the various factors involved in the decision, reasons for the change, and the perspective of different constituents within the sport regarding the matter. At the end, I'll present some personal commentary on the matter.

And we'll begin with INDYCAR president of competition and operations Derrick Walker.

That was the first word Walker uttered when I raised the subject over the phone. And the main threat to safety in Walker's opinion was what he called "inconsistencies" with the car, particularly the anti-stall.

"I know fans think a mix is a good thing, but we sustained a fair amount of damage to the cars, and I don't think fans want to see a bunch of crashes."

Also, Walker noted that while other series use standing starts effectively, there were some prohibiting factors particular to IndyCar that created issues.

[adinserter name="GOOGLE AD"]For one, an Indy car is bulkier and heavier, longer and wider than a Formula One car. Also, the narrow confines of many IndyCar circuits, particularly enclosed street circuits make for little runoff should something go wrong.

The comparison between Formula 1 and IndyCar was a point 2012 series champion Ryan Hunter-Reay likewise made before this season's Long Beach race. "They have a football-sized field, we have a swimming pool," said Hunter-Reay.

Another driver, who was not on the record at the time told me at Long Beach last year, that the concern he had with standing starts was that the cars were not built to execute them. While I did not go in-depth about the technical matters he was speaking of, I was reminded of that conversation during my talk with Walker when he likewise spoke of the inconsistencies with the care executing standing starts.

In short, confines of circuits, inconsistencies with software, and overall difficulty in getting the cars to effectively execute the starts, are reasons that seemed to motivate the decision from the perspective of the series.

Walker made clear that standing starts have been "postponed" (his word) not "cancelled" (my word).

"There is also some development needed with the launch [control systems]. I wouldn't say it's out of the picture for the future. We know the fans enjoy it, and we love it, too," said Walker.

Drivers have offered pretty mixed views on the subject throughout the past two seasons. Some such as Hunter-Reay with his swimming pool analogy and Tony Kanaan have expressed their reservations about standing starts. Others have been for them noting they highlight the diversity of the series.

Many Others have been well, indifferent. In fact, at Long Beach this past year two 2014 race winners who weren't on the record at the time told me and I'm paraphrasing "we're professional race car drivers, and we do what they tell us to do."

What about the teams?

None of the teams AutoRacing1 reached out to for comment condemned the decision. Chip Ganassi Racing team principal Mike Hull perhaps provided the most unique perspective.

To Hull, the matter was not standing starts v. rolling starts per se, and Hull made clear his team had "no preference" for one format or the other. Rather, the matter was about having a format, rather than what the format was.

"All we ask from the series is consistency," said Hull. "If we know what the rules are, and are given adequate time to prepare that helps with our preparation." Hull went on to give some examples of preparing transmissions and different systems in preparation for a season. This is Hull's view has been simplified without the back and forth. Hull would finish by saying, "We applaud IndyCar's decision."

The other side of the coin

One person disappointed with INDYCAR's decision was President/CEO of the Grand Prix Association of Long Beach Jim Michaelian. Michaelian has been with GPALB since its inception, and thus part of the promotional team for all 40 Toyota Grand Prix of Long Beach races.

The Long Beach circuit is also unique in that often the field inevitably becomes very 'strung out' due to the hairpin turn preceding the blast down Shoreline Drive.

"It was disappointing to hear that there will no standing starts in the Verizon IndyCar Series for 2015," said Michaelian. "I know that our fans have thoroughly enjoyed the spectacle that standing starts have brought to Long Beach throughout the years going all the way back to F1 days. However, I understand that safety has to be the priority consideration for anything that takes place on track. I hope that Derrick and his team can resolve some of these issues in the coming year so we can once again see and hear the 'hair raising' moment when the IndyCars launch off the grid on Shoreline Dr. or at any other possible IndyCar venue."

With IndyCar it is always quite easy to play the role of cynic. For example, with this particular matter, one could easily ask the following:

However, after speaking with Walker and others, an appreciation for the variety of factors that go into such a decision emerges.

[adinserter name="GOOGLE AD"]One, of course, is that the series wants to avoid a Saavedra-Indy GP or Hinchcliffe-Houston sitting-duck-type deal. Keep in mind, there were other stalling instances (Saavedra at Long Beach and Josef Newgarden at Toronto in 2013). Secondarily, such instances produce costly incidents for the teams.

Thus, Until there are adequate safeguards in place to avoid such scenarios, the series is correct in staying with rolling starts.

The 'hair raising' moment Michaelian speaks of, that sense of anticipation before the lights go out, should be the series' long-term goal at its road and street course venues.

Standing starts are not only one of the more exciting moments in racing, and another way for a series whose brand is built on its diversity to differentiate itself, but they are, if executed properly, safer. This can be seen particularly on many of the tight courses IndyCar competes, where the cars bunch up in the first turn. Standing starts minimize this 'accordion effect' by minimizing standing starts lessen the deceleration into the first turn as cars do not brake from top speed. Keep in mind, the incidents IndyCar has experienced with regard to standing starts have primarily been a function of the cars stalling, rather than accidents with the cars at speed.

Overall, we'll see where IndyCar goes in terms of standing starts within the coming years. While the current Dallara DW12 chassis was not built with standing starts in mind, it would seem that INDYCAR would want to make standing starts a focus in the development of the 2018 car.

At the very least, one hopes that the decision to postpone standing starts, is just that.