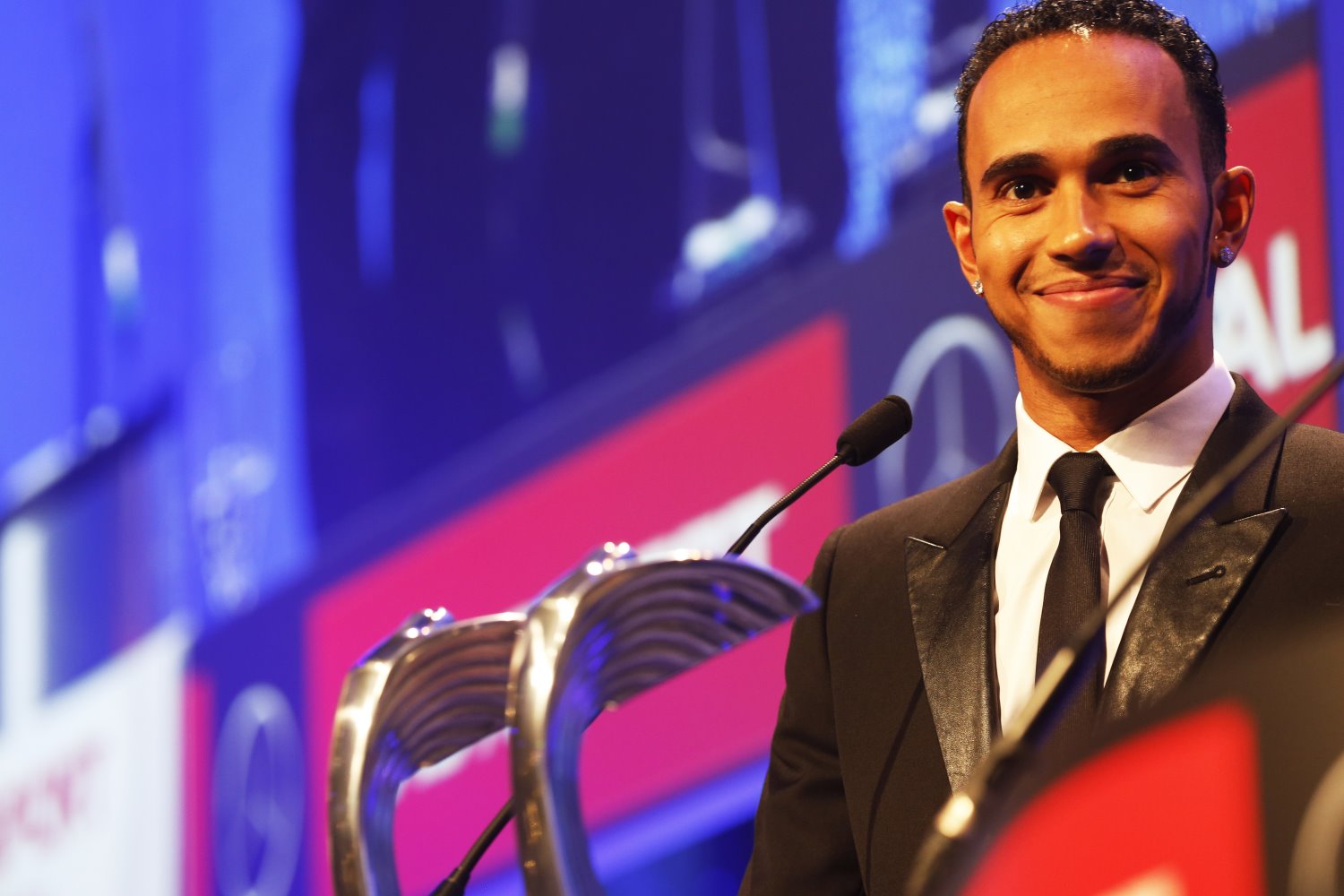 Formula 1 World Champion Lewis Hamilton received rapturous applause when he was announced as International Racing Driver of the Year at tonight's star-studded AUTOSPORT Awards 2014 in association with Mercedes-Benz at London's Grosvenor House Hotel as fellow champions Petter Solberg, Sebastien Ogier and Colin Turkington amongst many others were similarly recognized for their outstanding success.

A veritable 'Who's Who' of the motor sport industry, the annual AUTOSPORT Awards regularly unites the great and the good from every echelon of the sport and this year's ceremony was no exception. In front of some 1,250 guests at one of London's leading hotels, the creme de la creme from the 2014 campaign were honored for their achievements.

First to take to the stage was Ben Barnicoat, who was presented with the British Club Driver of the Year accolade by McLaren Racing Director Eric Boullier. The 17-year-old Racing Steps Foundation protege belied his lack of experience this season to clinch the coveted Formula Renault NEC crown with Fortec Motorsports as a car racing rookie and he reflected that it had been something of a whirlwind year.

"2014 was my first season in cars and I had a lot to learn, but I benefitted from some great support and I've got so many good people behind me at Racing Steps," he remarked. "I was able to take everything on-board and that paid off as we secured the Formula Renault NEC title. It was a great year, and hopefully we can progress further in 2015."

Williams F1 Deputy Team Principal Claire Williams and 2014 standout Valtteri Bottas were next up, and after announcing a new prize for 2015 in the shape of the AUTOSPORT Williams Engineer of the Future Award, they switched their attention to the National Driver of the Year BTCC Champion Colin Turkington. The Northern Irishman was in imperious form in 2014 as he proved to be a class apart in his eBay Motors BMW, tallying no fewer than eight triumphs en route to his second tin-top crown.

"The BTCC is never straightforward," Turkington quipped. "It invariably goes down to the final weekend, and with seven champions on the grid this year, it was tougher than ever. I need to pay special thanks to my team West Surrey Racing for giving me an incredible car in the BMW and letting me do my thing. Hopefully I can return next year with the No.1 on the side of it."

The next two awards were for British Competition Driver of the Year and International Racing Driver of the Year, and in both instances, the recipient was the same. MERCEDES AMG PETRONAS Formula One Team ace Hamilton was indisputably the fastest driver on the Grand Prix grid in 2014, and a second World Championship title was just reward for a stellar campaign that saw him notch up more than twice as many victories as his closest rival.

"It's very surreal being back here as a two-time World Champion I still remember coming here when I was ten-years-old!" said Hamilton, who accepted his Competition Driver Award from Sky Sports F1 presenter Martin Brundle and the International Driver Award from multi-platinum rap artist Tinie Tempah. "It's been an amazing season. I was very fortunate to have the best team behind me and the best car, and we did an amazing job together.

"We had a few problems throughout the year, but the important thing was we all stayed close together and kept pushing and lifting each others' spirits. I had a great competitor in Nico [Rosberg], and we had an intense battle throughout. I'm looking forward to more of the same next year!"

The Gregor Grant Trophy is awarded in recognition of lifetime achievement, and this year's recipient was the man who in 2014 became the first driver ever to secure two FIA World Championship titles in different disciplines. Having won the World Rally Championship back in 2003, Petter Solberg doubled up with the World Rallycross Championship spoils 11 years later and the popular Norwegian was visibly emotional when he was called up to the stage.

"I had a fantastic career in rallying, and then I had the opportunity to do something different," related Solberg, who received his trophy from Jenson Button. "Whatever I ended up doing, I knew I wanted to get out of the car with a big smile on my face and when I tried World Rallycross for the first time, that's exactly what I got! This car is really something special 600bhp and 0-60mph in less than two seconds!

"I believe whatever you do in life you have to give it 100 per cent, because nothing happens unless you really want it. We had a big fight this year really pushing the limit and extracting every last per cent. It was worth all the effort!"

Button also handed out the Pioneering and Innovation Award to Alejandro Agag, CEO of the new FIA Formula E Championship which has already caught the attention with some breathtaking racing and star names behind the wheel.

"When we started Formula E, many people in motor sport didn't think we would make the first race ourselves included at times!" recollected Agag. "To announce we were going to introduce a new championship with cars that at that stage didn't even exist was a bit of a challenge, to say the least!

[adinserter name="GOOGLE AD"]"We've received so much support from the motor sport world from Williams to McLaren to Donington Park and many, many more and I'm really proud of how far we've come."

Fittingly, the South African received the award from sportscar star David Brabham, who is aiming to bring the famous family name back onto the international stage following his recent highly successful crowd-funding venture.

"My favorite memories are probably the first win at Kyalami, which coincidentally was also the last race Jack Brabham won for Brabham I'm really proud of that and winning Le Mans with a road car up against the prototypes. We should never have won that race…"

The evening then turned its attentions towards rallying, with the Rally Car of the Year and Rally Driver of the Year accolades. After a season during which they swept all before them, the Volkswagen Polo R WRC and Frenchman Sebastien Ogier were worthy award-winners, receiving their respective trophies from 2015 F1 new boys Carlos Sainz Jr and Max Verstappen.

"This award is like the World Championship title for rally cars!" quipped Capito. "We didn't win it last year, so it's a big honor for us to achieve it this year. Now we're working hard to try to make it three titles in a row in 2015!"

"We won this year as the result of a team effort," concurred Ogier. "It was a really intense battle tougher than last year, for sure with great competition from my team-mate Jari-Matti Latvala in particular, who forced us to really dig deep and give it everything we had."

Sainz and Verstappen might be F1 rookies next year, but this year, the most impressive newcomer was inarguably Daniil Kvyat, who has some big racing boots to fill in 2015 as he prepares to replace four-time World Champion Sebastian Vettel at Red Bull Racing. The young Russian stepped up to the stage to receive the Rookie of the Year accolade from his new team boss, Christian Horner.

"It's been a great year," acknowledged Kvyat. "It went by so fast, and I was lucky to work with some great people around me at Toro Rosso. I think overall, we achieved everything we wanted to achieve and now I'm really excited about 2015 with Red Bull!"

With a sparkling record of 16 victories from 19 Grand Prix starts in 2014 in the hands of Hamilton and team-mate Rosberg, it was little surprise to see the all-conquering Mercedes-Benz F1 W05 Hybrid selected as Racing Car of the Year.

"There are so many great people in this team," underlined Costa. "There's an excellent atmosphere and real passion inside the team. Everybody enjoys working together, and we have a very stable basis now going into 2015."

The penultimate accolade was the second coveted Gregor Grant Trophy for lifetime achievement – presented by one of its previous recipients, three-time F1 World Champion Sir Jackie Stewart. The 2014 winner is a megastar in the world of US motor sport and tonight Richard Petty, the man known as the King' across the other side of the pond, was crowned in style.

The seven-time NASCAR Champion is one of the most iconic figures in the sport, having won the Daytona 500 a record seven times and a staggering 200 races during the course of his extraordinary career.

"I came along in NASCAR in the right place at the right time," reflected a modest Petty, who arrived on stage to a standing ovation and sporting his trademark Stetson and shades, and joked that Ã¢â‚¬Ã·surviving' was the greatest achievement of his career.

"I would say the biggest highlight was my 200th race win in 1984, when I took the lead on the very last lap in front of the President of the United States on Independence Day."

The final award of the night was arguably the most eagerly-anticipated and for six promising young racing drivers, unquestionably the most nerve-wracking. The McLaren AUTOSPORT BRDC Award has in the past set the likes of Jenson Button, David Coulthard, Dario Franchitti, Anthony Davidson and Paul di Resta on the fast track to global superstardom and this year's winner will receive $140,000, a McLaren F1 test, full British Racing Drivers' Club membership and an Arai GP-6 RC carbon helmet.

"It's been a long wait since the shoot-out at Silverstone," acknowledged Russell, at just 16, the youngest of the six finalists and indeed the youngest ever McLaren AUTOSPORT BRDC Award winner. "I have so many people to thank. So many amazing drivers have won this award in the past and gone on to achieve some fantastic things hopefully I can do the same."

As in previous years, the AUTOSPORT Awards raised vital funds for its two chosen charities, Tommy's and the Grand Prix Mechanics Charitable Trust.