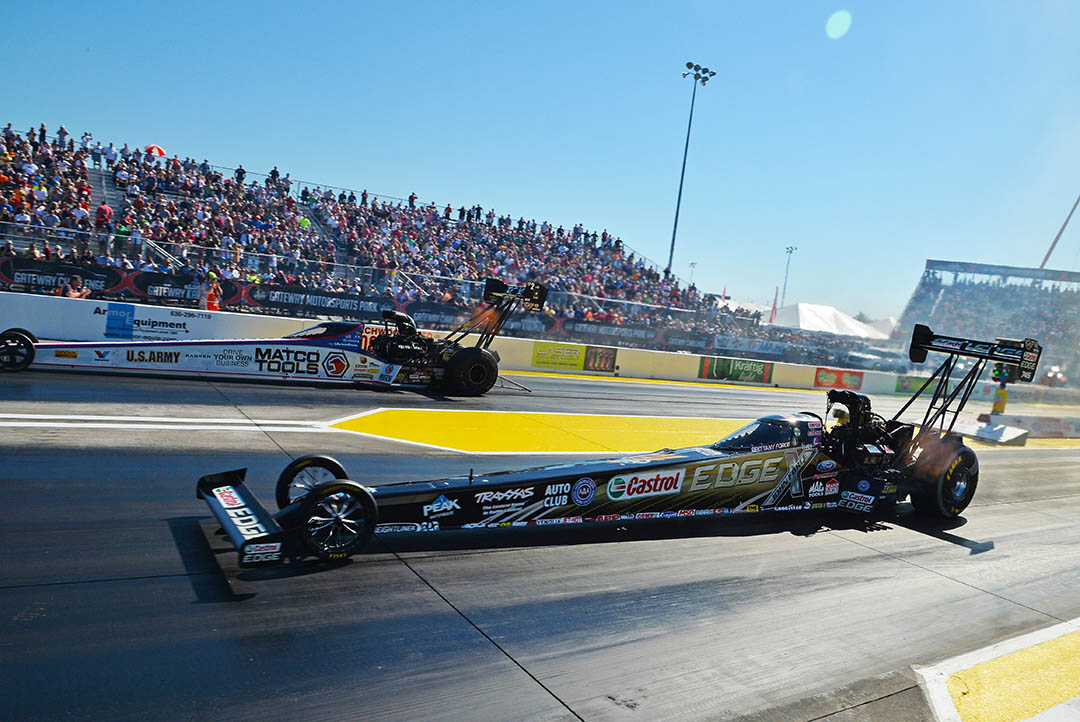 Force outran championship rival Matt Hagan in the final round to move to within 30 points of the series leader, her dad, 16-time world champ John Force.

She raced past her father in the semifinals and then used a performance of 4.094 seconds at 313.44 mph in her Traxxas Ford Mustang to hold off 2011 world champ Hagan's Mopar Express Lane/Rocky Boots Dodge Charger, which trailed with a 4.121 at 309.77.

"It's pretty awesome, for sure," said Force who became the first woman in NHRA history to win back-to-back races in Funny Car.

"I'm proud of my guys for giving me a great race car," she continued. "We got things turned around at the right time. Right here at the start of the Countdown to the Championship is when we need to have a consistent race car, and I think that's what we've got so far. To have back-to-back wins and make a move in the Countdown is just huge for us. We need to create a gap between us and everyone behind us and climb our way up to catch dad if we want to win this championship. That's what we have our eyes set on right now."

Courtney also defeated Bob Tasca and Del Worsham in earlier rounds. It was her fourth victory of the season and seventh win of her career. It is the first time that a father and daughter have held the top two spots in the points standings.

Hagan moved to third in the points order with his second Countdown final round appearance. He sits 42 points back of the leader.

In Top Fuel, Brown put his team back in the championship conversation by racing past defending world champ Shawn Langdon in the final round. Brown pulled away in his Matco Tools dragster with a 3.844 at 315.42, while Langdon's Al-Anabi Racing dragster slowed near mid-track and finished in 4.035 at 279.38.

"This was a big day for us," said Brown, who defeated Brittany Force, Terry McMillen and Steve Torrence to advance to the final. "We came into this race knowing our backs are against the wall. We've just been struggling at the last four races. We've been working hard, but no matter what we do, our car wasn't cooperating with us. We got it back. It didn't do exactly what we wanted it to do in the last two rounds, but it was close, and we were competitive to actually pull off this win today."

It was the third straight and fourth overall win at this event for Brown, who moved to fourth in the standings, 80 points back of series leader Tony Schumacher, who was upset by McMillen in the first round.

"The four wins in a row; that's what's most impressive to me," said Connolly, who cut Line's points lead to 26. "That tells you the depth of Gray Motorsports. I'm having a blast racing with them this year. We're getting breaks and everything is going our way. This is a humbling sport; it can turn on you any time. We're going to enjoy the wins as they come."

It was the third final round appearance of the season for Savoie, who is not eligible for the Countdown. He defeated Craig Treble, John Hall and Hector Arana Jr. to advance to his fifth career final.

"We had a good bike all weekend," Savoie said. "It's all good. Drag racing is a family thing. It's amazing that the whole Pro Stock Motorcycle pit was so happy for me. I always said if I ever won one of these I would retire. Well, I lied."

With the runner-up finish Hines increased his series lead to 57 over second place Eddie Krawiec.