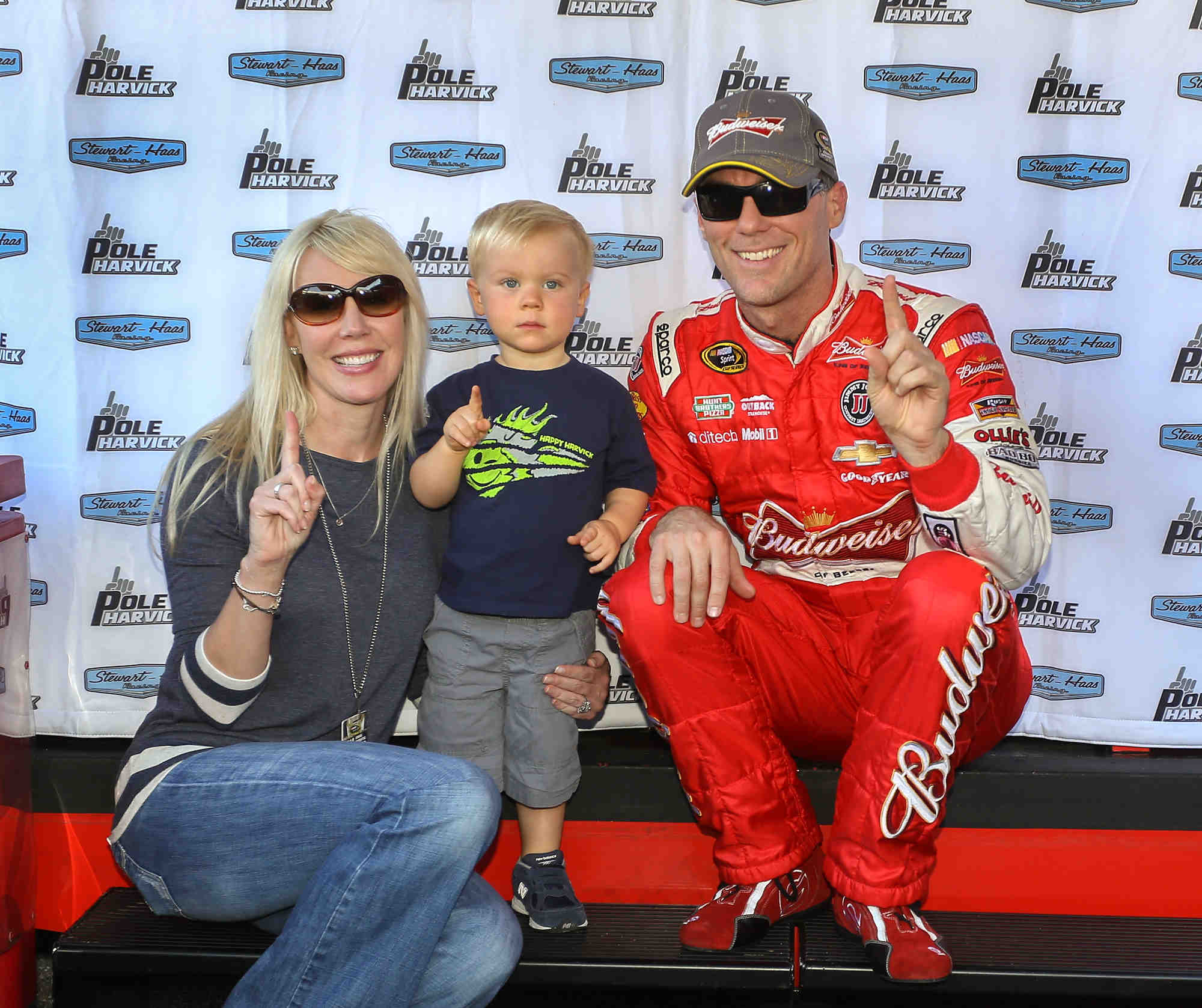 Harvick won the pole with a fast lap of 162.933 mph in the final of two rounds. This is his first career pole at Dover.

Joining Harvick on the front row will be Kyle Busch, who also started second in the spring race at Dover. Busch laid down a lap of 162.404 mph to secure a front-row starting spot.

Busch's Joe Gibbs Racing teammate Denny Hamlin will start third. Hamlin is currently on the outside looking in at advancing to the Contender Round, and this strong qualifying effort should help him run up front and gain ground in the standings. Brad Keselowski will start fourth and has already punched his ticket into the Contender Round by winning the opening race of the Chase for the NASCAR Sprint Cup at Chicagoland Speedway.

Jamie McMurray and Jeff Gordon will make up Row 3, while two rookies, Kyle Larson (seventh) and Austin Dillon (10th) will start inside the top 10.

Nine of the 16 drivers in the Chase did not advance to the final round of qualifying. AJ Allmendinger will have the worst starting position, 28th, of all the Chase drivers. He holds the 10th spot in the Chase standings.

Logano already has a spot in the Contender Round locked up following his win at New Hampshire Motor Speedway. Kenseth, Edwards, Newman, Almirola, Kurt Busch, Biffle and Allmendinger are all part of the logjam of Chase drivers that are between eighth and 16th in the standings, with just 12 points separating those spots. As the standings currently stand, Biffle, Kurt Busch and Almirola would be three of the four drivers to miss advancing to the Contender Round, and their starting spots mean they have plenty of ground to make up at the Monster Mile.

TALK ABOUT YOUR QUALIFYING RUN OUT THERE TODAY AND YOUR THOUGHTS FOR THE RACE ON SUNDAY:
"Just really proud of my guys. Obviously there is a lot going on with the Chase and everything that we are racing for and they just keep bringing fast race cars to the race track. Qualifying went well. I thought race trim practice went well. We just have to keep doing what we are doing and hopefully tomorrow we can evolve a little bit more. I feel like we have a much better foundation when we unloaded set-up wise here today and it just evolved quicker on each run in practice when you unload well. It's a lot of fun."

YOU HAVE HAD SEVERAL GOOD RUNS HERE, BUT HAVEN'T WON. CIRCUMSTANCES? OR THE TRACK IS A PROBLEM FOR YOU? HOW DO YOU SEE IT?
"This used to be a huge hurdle for us. The last race we were leading and a lugnut got behind the center of the wheel and knocked the inner liner valve stem out of it leading the race. You would classify that one as dumb luck, but we have had some bad days here. It's been a long time I would say '05 in that area was not pretty, but over the last few years this has been a good race track for us. It has been a lot more enjoyable and fun to drive."

CONSIDERING WHERE YOU ARE IN POINTS HOW RELAXED IS YOUR GROUP? I'M NOT SURE IF YOU HAVE BEEN AROUND THE NO. 41 AT ALL BUT CAN YOU TELL IF THE PRESSURE AT ALL WEIGHS ON THEM?
"Yeah, I can't speak for them, but I know that there is a lot of pressure every week and all we have talked about leading up to the Chase for a couple of weeks and over the past two week is just advancing. It doesn't matter when you get to Homestead what the stat sheet looks like you just know that you have to somehow figure out how to do better than most everybody else and get yourself in position to race at Homestead. The first goal was Chicago. The second goal was Loudon this is just another box to check and then it all starts over again next week when we get to Kansas. I think you have to be aggressive to be just competitive first off so you can't just sit on your hands and not race hard. For us we really haven't talked about what we are or aren't going to do it's just kind of been the same plan all along. Go out and try to be the fastest in practice, fastest in qualifying and hopefully have a chance to win the race."

ARE YOU GETTING FRUSTRATED AT ALL WITH CIRCUMSTANCES THAT ARE KEEPING YOU OUT OF VICTORY LANE?
"Not at all. I've been around this deal way too long to complain about top-five finishes. There are a lot of circumstances that go into winning races at a lot of these places. You just have to keep knocking on that door and then you will win some that you shouldn't win. A lot of times you don't win the ones that you think you should have won and win the ones that you don't think you should have won. You just keep finishing top five, top three and everything else will fall into place."

CAN YOU DESCRIBE THE ATMOSPHERE AROUND THE TEAM SINCE WEDNESDAY? HAS THERE BEEN A BIG SENSE OF RELIEF?
"I think for me personally, I can't speak on behalf of the team, but for me personally, yes. Obviously you worry about your friend and the circumstances that are surrounding him and how things could be dictated for the rest of his life. Just being around and knowing how much it has weighed on him and all the things that he has going on, for me personally I'm happy for my friend. As far as the team we have all got jobs to do and have had to press through them, but I'm overjoyed in obviously a devastating situation, but I'm just happy that it is to a point where everybody knows what is happening in the future and can start the process of trying to deal with it and move on into some sort of normalcy."

KYLE BUSCH, No. 18 Interstate Batteries Toyota Camry, Joe Gibbs Racing
Starting Position: 2nd
How confident are you starting second in Sunday's race?
"I'm pretty confident with it. I think we had a good car here in the spring — we just kind of lost the handle on it a little bit there early in the race. But, the way the track rubbered in throughout the first run and then especially the second run of the race — we just weren't ready for what happened. So, I think we've got a better understanding this time around and qualifying obviously went well for us here being in second and it's a good starting spot for us. It keeps us upfront and hopefully we can keep that track position and have a good handling car through the runs of the race and be there at the end."

How much will you pay attention to guys around you during the race who have to race well to advance in the Chase?
"You're always cognizant of that. I think just based off just how this points structure is and how it was to get in the Chase first of all through the first 26 weeks. You've got to be mindful of who you're racing and what's going on — sometimes of their situation and what's at stake there. But, for us, it's a top-20 finish on Sunday and we're moving on. That's not what we want to do but we want to race and go out there and see if we can't get a win for our Interstate Batteries Camry and everyone at Interstate Batteries and M&M's, Snickers, Doublemint, Monster Energy. So, hopefully we can have a good weekend here in Dover and more importantly carry that on through the next round."

How do you feel about your race team?
"I can't say enough about what everyone does at Joe Gibbs Racing. I think — where we're at right now this weekend — we're better than where we were here in the spring I feel like. TRD (Toyota Racing Development) — the guys again have stepped it up I feel like. They've worked real hard and have done a nice job for us and also just being able to try to get our cars better — I think that's a little bit where we've been lacking. We've been all over the place this year with trying different things. We haven't quite hit on something as good as it seems the Penske cars have — those guys are really, really good each and every week handling-wise."