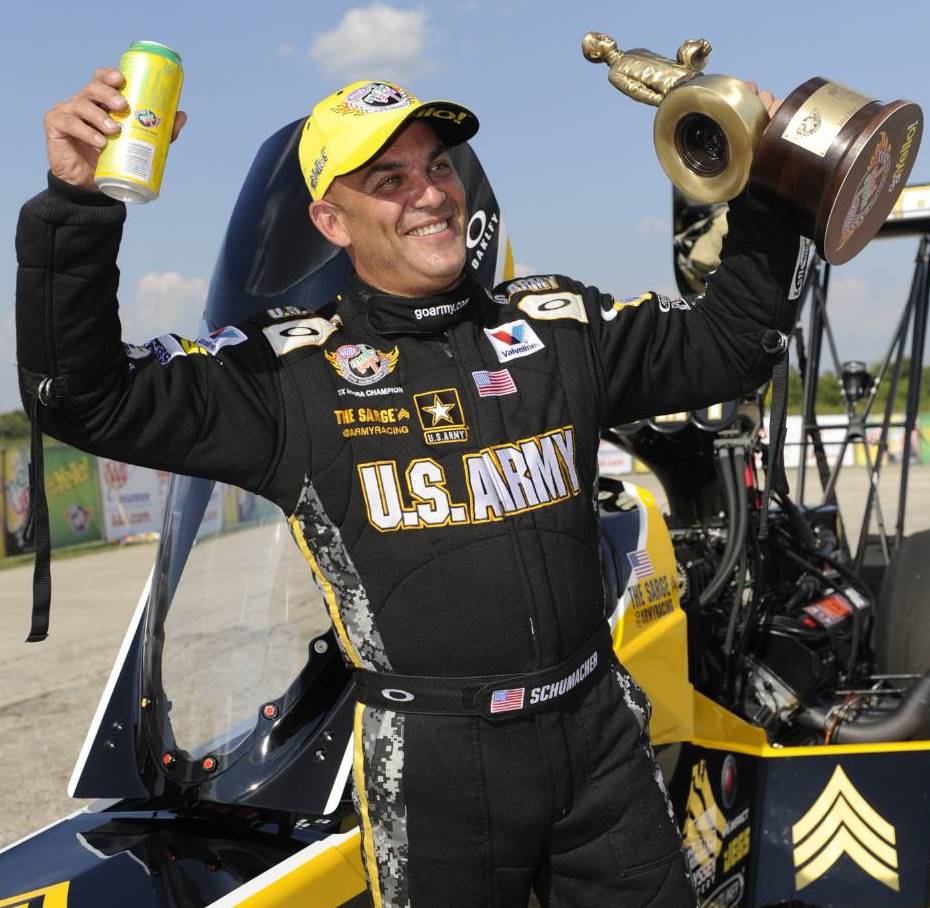 Tony Schumacher and his U.S. Army Top Fuel dragster team are rounding into championship form as he raced to his second victory in as many days, this time winning the AAA Texas NHRA FallNationals Sunday at Texas Motorplex.

Courtney Force (Funny Car) Dave Connolly (Pro Stock), and Andrew Hines (Pro Stock Motorcycle) were also winners in their categories at the second of six playoff races in the NHRA Mello Yello Countdown to the Championship.

Schumacher, who won the delayed Charlotte event here on Saturday, defeated No. 1 qualifier J.R. Todd in the finals for his 76th career Top Fuel win. Schumacher posted a winning run of 3.891 seconds at 318.62 mph to Todd's trailing run of 4.134 at 251.49 in his Optima Batteries dragster. With the back-to-back wins, he moved into the championship lead, and holds a 106-point advantage over second place Steve Torrence.

"It's an unbelievable situation," said Schumacher. "We've won two races in less than 24 hours. My family drove up, I won a race, we went to dinner, went to bed, came back, and won another race in under 24 hours.

"We have a 100-point leading going into two more back-to-back races. It's brutal pressure. Going into with this much momentum places that pressure on other people. Some will be able to handle it; some won't."

Doug Kalitta, who started the Countdown to the Championship as the No. 1 seed, sits 107 points behind Schumacher in third. Defending world champ Shawn Langdon is in fourth and Todd, who entered the playoffs in 10th, climbed to fifth in the standings.

In the Funny Car finals, Force recorded the 11th win by a woman in 2014, when she defeated Del Worsham in the finals. Force powered her Traxxas Ford Mustang Funny Car to a winning time of 4.227 seconds at 301.07 to Worsham's trailing run of 4.309 at 285.65 in his DHL Toyota Camry. Force, who remained fourth in the points order, was the No. 1 qualifier at the event and this marks the second time this season she has won from the top position.

"It was great to qualify No. 1, but I still knew I was possibly going to have to race one of my teammates in the second round when I looked at the ladder," she said. "Luckily for us, we were able to get that round because that was a huge win for us. Obviously, [they're some of] my biggest competition, even though they are my teammates. [My dad and Robert might be] my biggest competition out here because they have great race cars. They're keeping it consistent, and that's the hardest thing to break, so I'm proud of my team to come out here and make some great laps – especially out here in the heat of Texas."

Force suffered a first round loss at the opening event in the Countdown and knew the team needed a strong performance at this race for her to secure a championship.

"We definitely needed to make a turn for the better," Force continued. "We needed to go some rounds today if we still wanted a shot at the championship. After the loss in Charlotte it felt like the No. 1 spot was drifting further away. It was almost a good thing he (John) went out a little bit early here, and he wasn't creating such a huge gap for us to [potentially] reach that No. 1 spot. We've made a huge move up and we're still in the hunt."

Her father John retains the Funny Car points lead by 45 over teammate Hight. Matt Hagan is in third and Ron Capps and Alexis DeJoria are tied for fifth.

In Pro Stock, it was a rematch from the final in Indianapolis as Connolly faced his Gray Motorsports teammate Shane Gray. This time Connolly got the better of Gray with a run of 6.616 at 210.05 in his Charter Communications Chevy Camaro to the trailing run of 6.617 at 210.73 in the Gray Manufacturing Camaro. This is the second win of the season for Connolly, the 25th in his career, and marked the third consecutive Pro Stock win for Gray Motorsports.

"I've been very blessed with a lot of great opportunities and I would have to say this is one of the best," said three-time Texas Motorplex winner Connolly, who defeated Shane Tucker, Allen Johnson and Jonathan Gray to advance to the final round. "Great group of guys, the whole family is. The comradely we have and the friendships we have grown over the year is unbelievable. We are out there having fun and running into each other in semifinals and finals and could not be better. We are avoiding each other first few rounds and early and it is a win-win when we make it to the final and there is Gray Motorsports on both the doors."

Hines secured his fifth Pro Stock Motorcycle win of the season with ease, as his opponent Steve Johnson was unable to make the finals due to mechanical issues with his Suzuki. Hines notched his first Dallas win and 37th of his career with his performance of 7.571 at 186.54 on his Screamin' Eagle Vance & Hines Harley-Davidson. With the victory, he moves into the points lead over teammate Eddie Krawiec.

"We changed a bunch of stuff, hard parts, key strokes in the computer and it finally all came together in that last qualifying session," Hines said. "It got better and better and we are starting to see the results and the E.T. on the board. I've been to three or four engines and this one finally responded."