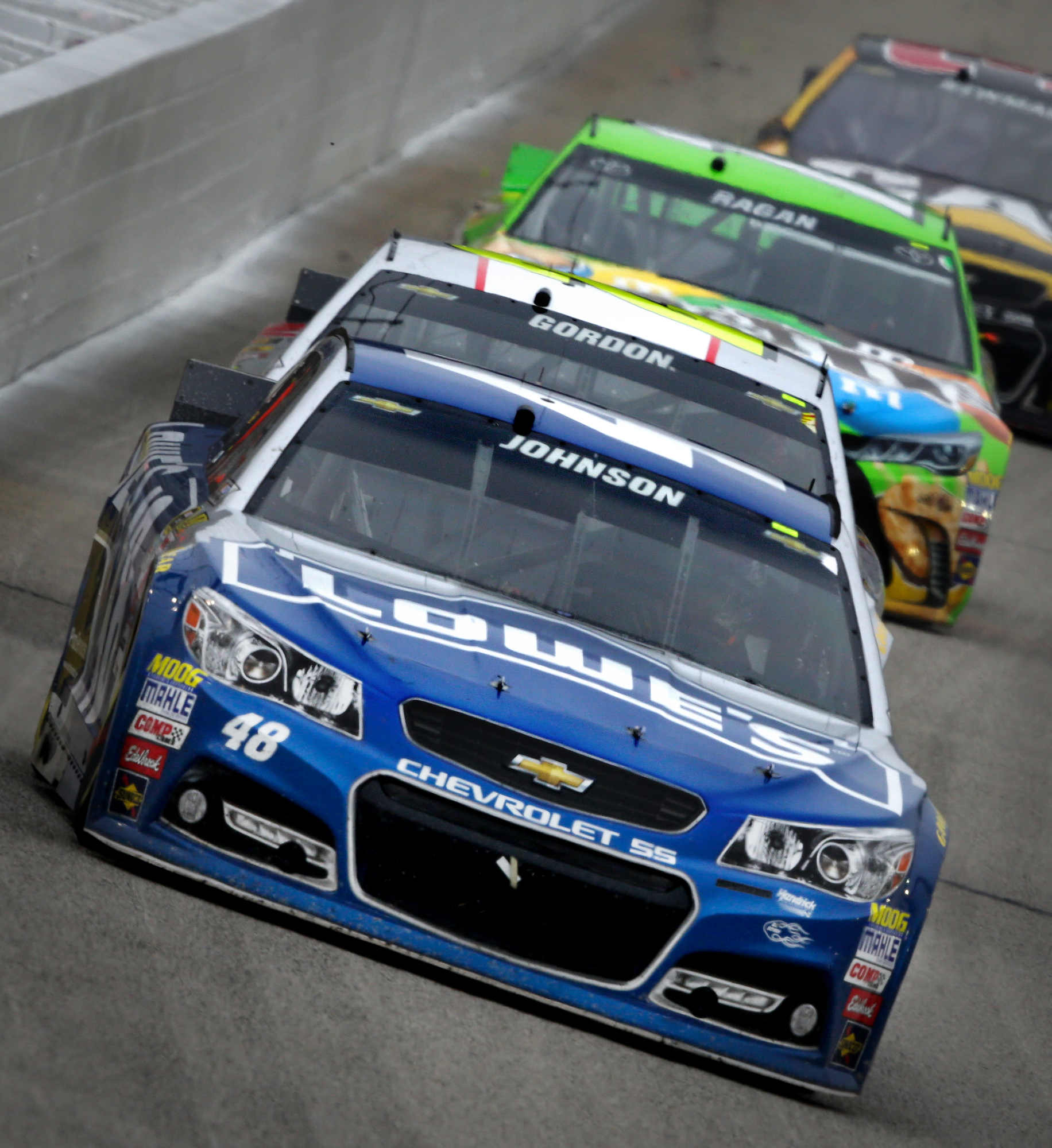 Was it just me, or did anyone else find it ironic that the loudest complaints about the rules came from those unable to follow them?

I speak, of course, about the rather bizarre qualifying session this past Friday for the Sunday's Folds of Honor QuikTrip 500 NASCAR Sprint Cup race, in which 13 of 47 would-be qualifiers were unable to get through inspection in time to make a first round qualifying attempt. Thus, those 13 drivers were eliminated from qualifying. Amongst those who failed to make it through inspection were star drivers Jeff Gordon, Matt Kenseth, Jimmie Johnson and Tony Stewart.

And why were these drivers and others unable to get through inspection?

Well, according to them, and many of the mindless ignoramuses that inhabit NASCAR media centers on a week-to-week basis, many of whom referred to the matter as a "debacle," the blame needed to be laid squarely at the feet of the sanctioning body. But let me tell you: the biggest debacle Friday was listening to the drivers and their de facto media mouthpieces spew their ignorance.

Perhaps, the most brilliant take, came from Joe Gibbs Racing driver Matt Kenseth. Kenseth, who of course drives for an organization with a scintillating record of following the rules, used the airtight logic that 'well, because everyone is failing tech, NASCAR should devise a better system.' And to further highlight the idiocy of Kenseth's logic, I'll just go ahead and let him speak.

Yes, exactly Matt: you and your team have no responsibility to make your car legal as 33 of your competitors managed to do. It's absolutely NASCAR who should figure out an efficient means of expediting its inspection process so your illegal car can take to the track in a timely fashion, without consideration for the television audience or your team's responsibility to produce a legal car.

Gordon, also employed by an organization that would never try to circumvent the rules, displayed a level of insight similar to Kenseth when he chimed in.

Understandably frustrated by the fact he was unable to turn laps on the day 3M debuted as a primary sponsor of the iconic #24 Chevy, the 92-time NASCAR Sprint cup winner said "fans deserve an apology" for numerous cars not even getting "a chance to go on the track."

Now, that's a noble sentiment. I can, after all, sympathize with a Jeff Gordon or Matt Kenseth fan upset over travelling a long distance, paying for a ticket, and all that comes with attending a race, then not seeing their favorite driver. But Gordon didn't exactly don the hat of responsibility. He does not acknowledge he or Hendrick Motorsports let down fans. Rather, Gordon played the never-go-wrong "what about the fans," card while simultaneously and not so subtly throwing NASCAR right under the bus.

Like Kenseth, Gordon took zero responsibility for the fact his team produced an illegal car. Rather, like entitled children each wanted NASCAR to hurry up already and put their illegal cars on track.

Buck's message seems pretty simple to me: make your car legal and you have nothing to worry about.

Whatever the case Gordon and Kenseth can spare us the victim routine. That, or not do such a lousy job of being a cheat.

Gordon would make news in yesterday's race, again, not for a reason he'd like.

For the second straight week, Gordon was caught up in a late race multi-car melee and the front end of his #24 Chevrolet found a concrete barrier not outfitted with the SAFER Barrier. Of course, compared to Kyle Busch, who broke his leg in a gruesome head on crash on the final lap of the Alert Today Florida 300 NASCAR Xfinity Series race at Daytona, Gordon was lucky.

These accidents have placed The Steel and Foam Energy Reduction Barrier, better known as the SAFER Barrier developed because IndyCar funded the project (not NASCAR), at the forefront of discussion. In particular, there have been loud cries to see the SAFER Barrier essentially everywhere NASCAR races. While I don't have space to dissect all the details here, the SAFER Barrier is truly a marvel, and I would argue the most impactful racing innovation of my lifetime. Its introduction over the last decade-and-a-half has greatly revolutionized race safety, to the point we have become accustomed to witnessing major impacts and drivers walking away. For more, here is an excellent video outlining how the SAFER Barrier works.

A marvel it may be, but marvels don't just magically appear folks. This one at least, costs money; lots of it. By our math, the SAFER Barrier can cost about $2 million/mile. At that price, in this economic climate, hitting the SAFER Barrier is not a right people, but privilege. At minimum, the notion that every inch of every track be outfitted with the SAFER Barrier is simply not realistic.

Daytona International Speedway president Joie Chitwood used that exact phrase, after Busch's crash, promising to outfit his Speedway thoroughly with the SAFER Barrier. But let's face reality people: not everyone is Daytona. Not everyone has $400 million committed to renovating their facility, as Daytona does with Daytona Rising. And I'll give you an example.

[adinserter name="GOOGLE AD"]In terms of stature, the two most iconic racing facilities in the United States are undoubtedly Daytona and the Indianapolis Motor Speedway. But when you compare both of the facilities recent renovations project, Daytona's estimated at $400 million and IMS' about a quarter of that, a reality becomes clear. Economically, IMS is not Daytona. Not even close.

IMS President Doug Boles essentially confirmed this speaking with Curt Cavin of the Indianapolis Star in the aftermath of Busch's accident. Cavin in the article noted that outfitting all of IMS with the SAFER Barrier was not practical. Boles also raised another point regarding the allocation of the SAFER Barrier saying: "We could add (barrier) if we need to, but we are really, really covered in places where 99 percent of the cars are going to hit with anything but a pancake hit."

In essence, tracks set up the SAFER Barrier where they believe it is best used, in areas with the greatest likelihood of accidents. Boles notes that he is fairly confident his track has 99% of the places cars are likely to hit covered.

Also, the SAFER Barrier is merely one component of a track's safety system. Tracks must make substantial investments in spectator safety, catch fencing, medical response facilities and other areas. In fact one individual, who holds an upper level executive position in a company that conducts a major Verizon IndyCar Series street race told me that the 'safety cell' for the event was worth about $10 million. That's with no SAFER Barrier, no permanent medical facility, no ongoing costs in maintaining a race surface, and no ongoing investment in a permanent spectator facility.

One last thing to consider is the simple fact that track revenues are not what they were a decade ago. For example, the latest NASCAR TV contract is similar in terms of revenue to the previous one. However, that $4 billion-plus in the last TV contract was spread over 8 years, whereas the money in the latest TV deal is spread over 10 years. Add in the fact, tracks are clearly struggling to sell tickets in the volume they once did, and we know the cash is not flowing in as it once did.

This is not to say tracks and sanctioning bodies should view safety entirely through the cold prism of the bottom line. Both parties should make every effort to continue ongoing investments in race safety for competitors and spectators alike.

But at $2 million/mile the SAFER Barrier cannot cover every inch of every track. Rather, it's going to be installed in areas where it is most needed. And until that price changes or the revenues of race facilities substantially increase, the notion that no driver will ever hit a concrete wall again is certainly noble, just not rooted in reality.

After last week's testing crash for Fernando Alonso, McLaren sent out a message noting that an extreme gust of wind was the cause of the Spaniard's accident which left him hospitalized for three days. Maybe, but I can also tell you what citing the wind does: absolves McLaren of fault in the accident. Keep in mind, during his years at Ferrari, Alonso, a master of the public relations game, managed to perpetuate the belief (whether real or imaginary), that the shortcomings of Ferrari were due more to the car than his driving ability.

I wonder if this dynamic, in which Alonso is viewed as a supreme talent, who is only hamstrung by less-than-optimal equipment, is already weighing on the brass at McLaren. Keep in mind, McLaren hasn't won a Grand Prix the last two seasons, and has captured a mere one Constructors' Championship in the last 24 seasons. In short, the pressure is on in Woking. And I have to wonder what strain that pressure will put on this already awkward McLaren-Alonso remarriage.

Looking to tie the knot

If the latest chatter is to be believed, there is a significant possibility 7-time Indy car winner Justin Wilson will not be a full-time IndyCar driver this year. Not that I'm alone, but I have tremendously high regard for Wilson's abilities behind the wheel and have personally witnessed the classy manner in which he is known to conduct himself out of the car. Of course, there are simple financial realities of the IndyCar Series in 2015 too convoluted to discuss here making Wilson's efforts to land a ride more difficult.

[adinserter name="GOOGLE AD"]However, with so many teams having their plans locked down, I wonder if Wilson's best career move now might be to adopt the Roberto Moreno 'Super Sub' role, showing up to every race helmet-in-hand, seat ready to go. Because if an owner with a top team loses a driver to injury or grows disappointed with one of his regular drivers' performance, Wilson will be the first on the speed dial. For Wilson, it might be his best chance of gaining a seat with one of the top teams.

Jimmie Johnson has never had to spend much time looking for a top flight ride. And he did nothing particularly extraordinary (for him, at least) in winning Sunday's Folds of Honor QuikTrip 500. Just let the record show, an argument can easily be made, Johnson is the best stock car driver EVER!!! Yes, better than Richard Petty, better than Dale Earnhardt, better than Jeff Gordon. At the very least, no race car driver that I've seen, has ever made winning look as routine as Johnson.