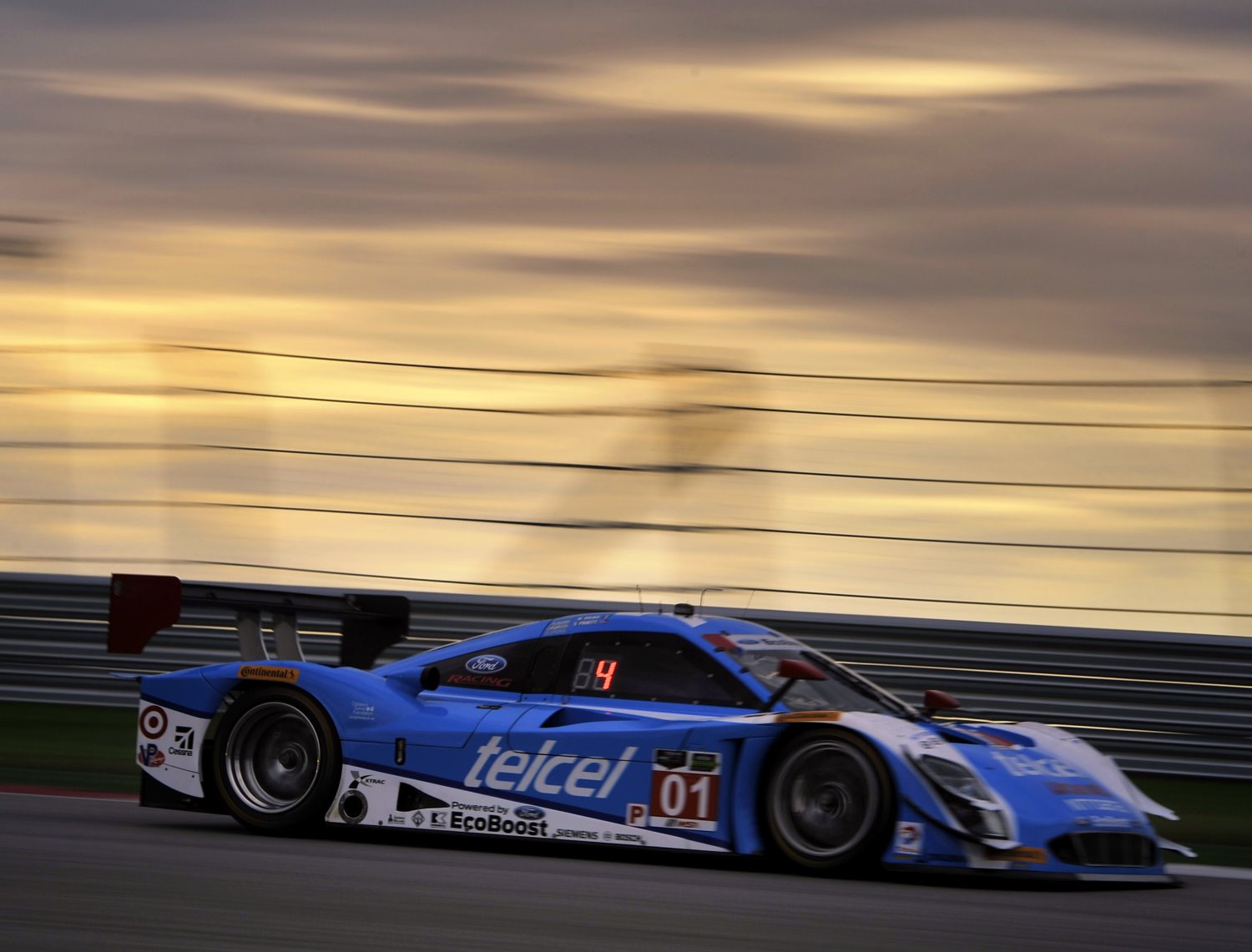 Scott Pruett held off a furious late-race charge from Alex Brundle and Joao Barbosa to win the TUDOR United SportsCar Championship Lone Star Le Mans race at the Circuit of The Americas.

Pruett's Ford EcoBoost/Riley DP edged the Ligier JS P2/Honda of Brundle by 2.336 seconds at the finish of the two hour, 45-minute race. Brundle squeezed past Barbosa with five minutes remaining in the esses, but Barbosa tried to return the favor. The battle of those two drivers allowed Pruett to extend his lead by four seconds with four laps remaining.

Pruett benefitted from the fuel mileage of his Ford EcoBoost engine, finishing the race on two stops, running 26 laps of the 77-lap race on his last tank. He ran out of fuel on the cool down lap shortly after taking the checkered flag.

Pruett and co-driver Memo Rojas scored their third victory of the season for Chip Ganassi Racing with Felix Sabates. The victory was the record 59th sports car triumph for Pruett. He used all his experience to first conserve fuel and then use lapped traffic to keep Brundle and Barbosa behind him after taking the lead with 36 minutes remaining. He took the lead after Brundle and then Barbosa made their third pit stops.

"At the end of the race, I had to take some chances (in traffic)," said Pruett. "I was way off the line sometimes picking up marbles. I had to get past the lapped traffic as quickly as I could and anywhere I could. A win was the only thing we wanted. You take chances and sometimes it pays off. I wanted to take those chances today and it worked out."

The Ganassi team, which started third, decided to conserve fuel from the start.

"We knew it was going to be tight," said Pruett, who had to switch to the reserve tank with two laps remaining. "We thought we would have a fighting chance if we did just two stops."

He continued to conserve fuel until Barbosa and Brundle pulled up to his rear bumper with 12 minutes remaining.

An earlier turning point took place on a restart following the race's only full-course caution period at the one-hour mark. Gustavo Yacaman was leading in OAK Racing's Ligier, but was spun at the top of the hill in Turn 1 by the Corvette DP of Michael Valiante, who received a drive-through penalty. The contact dropped Yacaman to sixth place, 10 seconds behind leader Barbosa.

"Barring that, we had the pace to win the race," said Brundle, who won the pole on Friday and relieved Yacaman on his second pit stop. Brundle returned to the lead, but a third full stop for tires and fuel left him in arrears after Barbosa stopped for a gas-and-go that lasted six seconds. That put Pruett in the lead by six seconds over Barbosa and 13 seconds versus Brundle.

"We had pace all weekend," said Brundle. "But it's one thing to get to the back of the people you're chasing. It's such a twisty course you have to get creative to get by."

In the GT Le Mans class, Kumo Wittmer and Jonathan Bomarito took the victory in their Dodge Viper SRT after the leading Porsche 911 RSR of Nick Tandy pitted 18 minutes from the finish with a drivetrain problem. Tandy had established as much as a 40-second lead.

Coupled with the Corvette C7.R of Antonio Garcia finishing ninth, Wittmer and Bomarito took the championship lead by six points with one race remaining. Bomarito attributed the victory to his team's pit work, which moved it up to second place behind the fleeing Porsche of Tandy.

"The first stop moved us up a position and the second one gave us a gap (over the other GT contenders)," he said.

Colin Braun and Jon Bennett clinched the Prototype Challenge driver championship with a runner-up finish in their CORE autosport ORECA FLM09. The day was not all roses; Braun was penalized with a pass-through penalty after hitting Sean Rayhall at Turn 1 during a battle for the class lead. Rayhall recovered to take the victory with co-driver Luiz Diaz for 8Star Motorsports.

Driving a Dodge Viper SRT, Ben Keating and Jeroen Bleekemolen earned the GT Daytona victory after Bleekemolen caught and passed class leader Dane Cameron's BMW Z4 with 30 minutes remaining. Cameron had suffered some right front corner damage, but was able to hold on to third place and break a five-way tie in the championship chase headed into the season-ending Petit Le Mans. He now leads by four points, 275-271, over co-drivers Leh Keen and Cooper MacNeil.