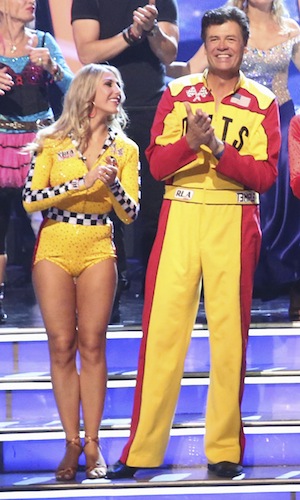 Backed by a tremendous amount of hoopla, "Dancing With The Stars", (DWTS), made it's highly anticipated season debut September 15th on the ABC Network. I wouldn't know much about that. If by chance there's something that I need to know I can always ask the lady of the house who never misses this program.

However, when I learned that NASCAR driver/Fox Sports TV analyst Michael Waltrip was one of the dancing celebrities I knew I had to watch.

As most NASCAR racing fans will recall, Fox Sports provided the live television coverage for the first half of the Sprint Cup season. During their pre race shows, Waltrip would take a 60 second sprint like walk down pit road saying hello to drivers and celebrities standing on pit road. That thought made me wonder: how is he going to meet the physical demands of dancing the cha cha when he gets so winded walking down the pit road of a race track?

Waltrip was teamed with DWTS professional dancer Emma Slater. Their first appearance on the show was a video clip of them practicing in a rehearsal room with mirror lined walls. Displaying his famous sense of humor, Waltrip looked at himself and said: "I've got a pretty nice ass for an old guy-looks like two cats wrestling to get out of a paper bag."

Waltrip was wearing a very bright yellow NASCAR style driver's suit, that he referred to as a "one-zie", with a bright red "DWTS" logo emblazoned on his chest. Forgive me Mikey fans for making this observation but, when I saw this outfit for the first time, my initial thought was: "OMG-he looks like a giant jar of French's Mustard."

Waltrip and Slater's initial live television dance was a cha cha performed to the classic rock tune "Born To Be Wild." That's probably not as easy as it seems. I won't tell you it was the best dance floor action I've ever seen, but it certainly wasn't the worst either. In all fairness, Waltrip's performance wasn't that bad for guy visiting a brave new world. By the way, if you want to see a worst case scenario then check out dance floor drunks at your local cocktail lounge.

Once their presentation concluded, it was time for Waltrip and Slater to hear the opinions from the panel of judges which, for what I gather, can sometimes be rather unpleasant.

Judge Len Goodman, a rather stuffy British dude who doesn't seem to enjoy much of anything, said: "it was like the engine was running but you never got out of first gear. Relax and enjoy it."

Judge Bruno Tonioli, a very drama laded dude who can't render an opinion without standing and jumping up and down, said: "I think it was question of tuning, you looked like a go kart trying to keep up with a Ferrari." As the kids would say: "OH SNAP!"

With his typical sense of humor, Waltrip replied: "in my defense, the leap I did gave me a wedgie. This uniform is tight in places I'm not used to."

The judges awarded Waltrip and Slater a total of 25 points which was very close to the total earned by many of the other dance teams.

Also weighing in, via "Twitter", on Waltrip's dancing talent were some high profile names from the world of NASCAR racing. In an act of brotherly support, Darrell Waltrip said he watched the live show, as well as the instant replay, and said "he did a fine job. He always goes where no driver has been."

Also lighting up his "Twitter" account was six time NASCAR Jimmie Johnson who said: "I left MNF, (Monday Night Football), to hear Michael Waltrip talk about a wedgie. I quickly hit the previous channel button. You're a brave man, Mike."

Even an employee of Michael Waltrip Racing weighed in. Driver Clint Bowyer, also well known for his razor like sense of humor, wrote: "guess a person's going to have watch "DWTS" to see if this Emma Slater can do something with this boss of mine."

Round two of "DWTS" was aired the following night and was described as an elimination round. In the early part of the program Waltrip/Slater was declared to be "in jeopardy" meaning they could be eliminated from the competition that very night.

Apparently, what keeps a couple active in the competition are the points awarded by the judges combined with the number of text message votes from the show's fans. Apparently, the viewers came through big time for Waltrip. At the end of the show he was declared to "be safe."

Thank you NASCAR Nation for sending those voter text messages. Due to your efforts we will now get to see Michael Waltrip's go kart chase Emma Slater's Ferrari at least one more time.