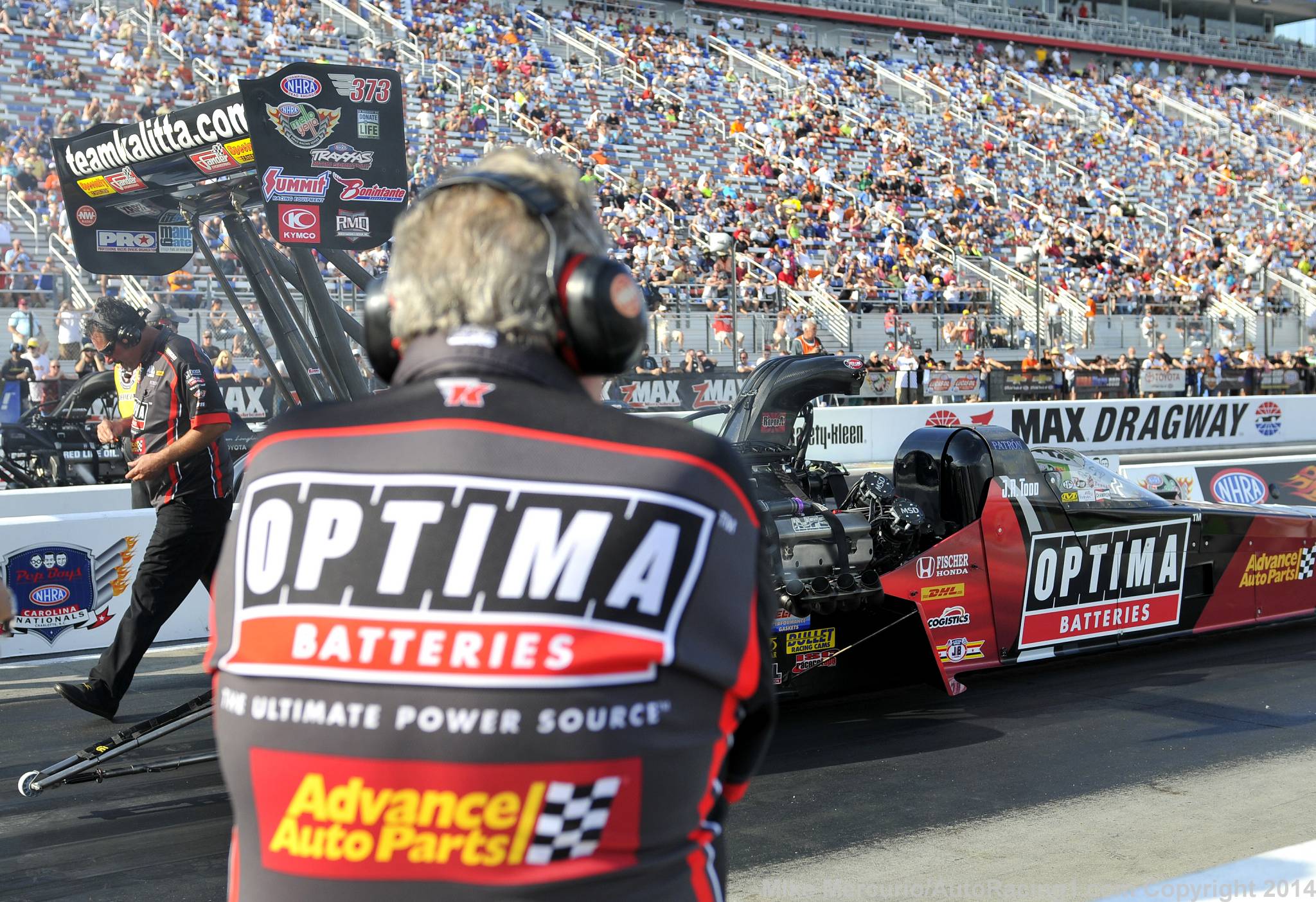 J.R. Todd raced his way to his first top qualifying position of the season in Saturday’s final Top Fuel qualifying sessions for Sunday’s seventh-annual Pep Boys Carolina Nationals at zMax Dragway in the opening event of the NHRA Countdown to the Championship.

Todd fought his way back in the final round of qualifying to reclaim the no.1 starting spot in Top Fuel, beating out Steve Torrence in a back-and-forth qualifying effort to earn his first top qualifier of the season.

Todd, who held the provision no. 1 position after Friday’s second round, fell to second after losing a blower belt during his run in Saturday’s opening session while Steve Torrence was able to power to the top of the ladder.

In the final round, Todd and Torrence took to the track as the final pair but only Todd was able to improve on his time, clocking in with a 3.804 at 317.64 mph to put his Kalitta Motorsports dragster on the pole for the first time this season.

“I was more impressed with the run we had going in Q3 (round three) – that was pretty spectacular, looking at the early numbers before the blower belt came off," said Todd, who will face Clay Millican in the first round of eliminations on Sunday. “We were fortunate enough to sneak around Torrence there in Q4 and grab the top spot."

Sitting in the tenth spot in the Countdown field, Todd earned eight bonus points as he tries to claw his way into contention for a Top Fuel title.

“We just need to get all the points we can," Todd said. “Like I said, there’s nowhere for us to go but up, starting off in the number 10 spot (in the Countdown), it’s a great start to the Countdown for us."

Terry McMillen, Chris Karamesines and Ike Maier failed to qualify for the event.

Alexis DeJoria rebounded from a disappointing performance in Friday’s early qualifying session to garb the low ET of the event for the Funny Car class, going 4.090 at 300.53 to go into Sunday’s eliminations as the no. 1 qualifier and the only driver to run below 4.1 seconds.

Fresh off her victory at the US Nationals two weeks ago, DeJoria fell flat in Friday’s opening round and then missed out on a second round try after fuel leak forced her crew to pull her PatrÂ¢n Toyota Camry back to the pits, dropper her to 10th on the ladder.

On Saturday, DeJoria came back strong in the opening round, running a 4.100 at 298.80 mph to vault to the no. 1 spot past top qualifier Matt Hagan before putting an exclamation point on her qualifying effort in the final round.

It’s just the second no.1 qualifier of her career for DeJoria, who is currently seeded fourth in the Countdown for the Championship field.

“It’s only our second No. 1 so it’s really exciting for our team," DeJoria said. “(Crew chief) Tommy (DeLago) and the guys have got a real good handle on the race car and they’ve managed to get us down the track more often than not. The consistency has helped us get round wins and get better. I am really excited about our chances at this race."

Local favorite Bob Gilbertson, who never made a full pull all weekend, was the lone non-qualifier.

Ender-Stevens roared to the top of the Pro Stock ladder to score her third no. 1 qualifier of the season and ninth of her career, running a 6.568 at 210.37 in Saturday’s opening session to re-gain the pole from Vincent Nobile.

Enders-Stevens, who came into the Countdown seeded second behind Jason Line, swept all four qualifying sessions to collect 12 bonus points to gain 10 points on the points leader.

“We picked up 10 points on Jason (Line) which is so crucial with only 24 rounds of racing left," said Enders-Stevens. “Hat’s off to my team for giving me such a consistent race car. The track was pretty tricky this afternoon being as hot as it was and they nailed the tune-up. I’m really excited going into Sunday."

John Gaydosh, Jr. took the bump spot and will face Enders-Stevens in the first round of eliminations.

In Pro Stock Motorcycle, Eddie Krawiec ran a 6.849, 194.30 in Saturday’s first round to snatch the no. 1 qualifier spot back from Hector Arana, Jr. and collect his second-straight top qualifier and seventh of the season.

Krawiec, who led Friday’s opening round of qualifying, was the only rider to improve on his run from Friday’s sessions, but nailed the low ET in three of the four sessions to earn 10 bonus points in his battle with points leader and teammate Andrew Hines.

“We came out and made a good run on Friday and that set the tone for the weekend," said Krawiec, who won two weeks ago at Indianapolis. “We just need to build on what we’ve done in qualifying. We’ve had a great bike all year but we don’t have as many wins as I feel we should. We’ve learned that even if you’ve got the fastest bike, you won’t always win. As a rider, I need to do my job and keep the bike performing well."