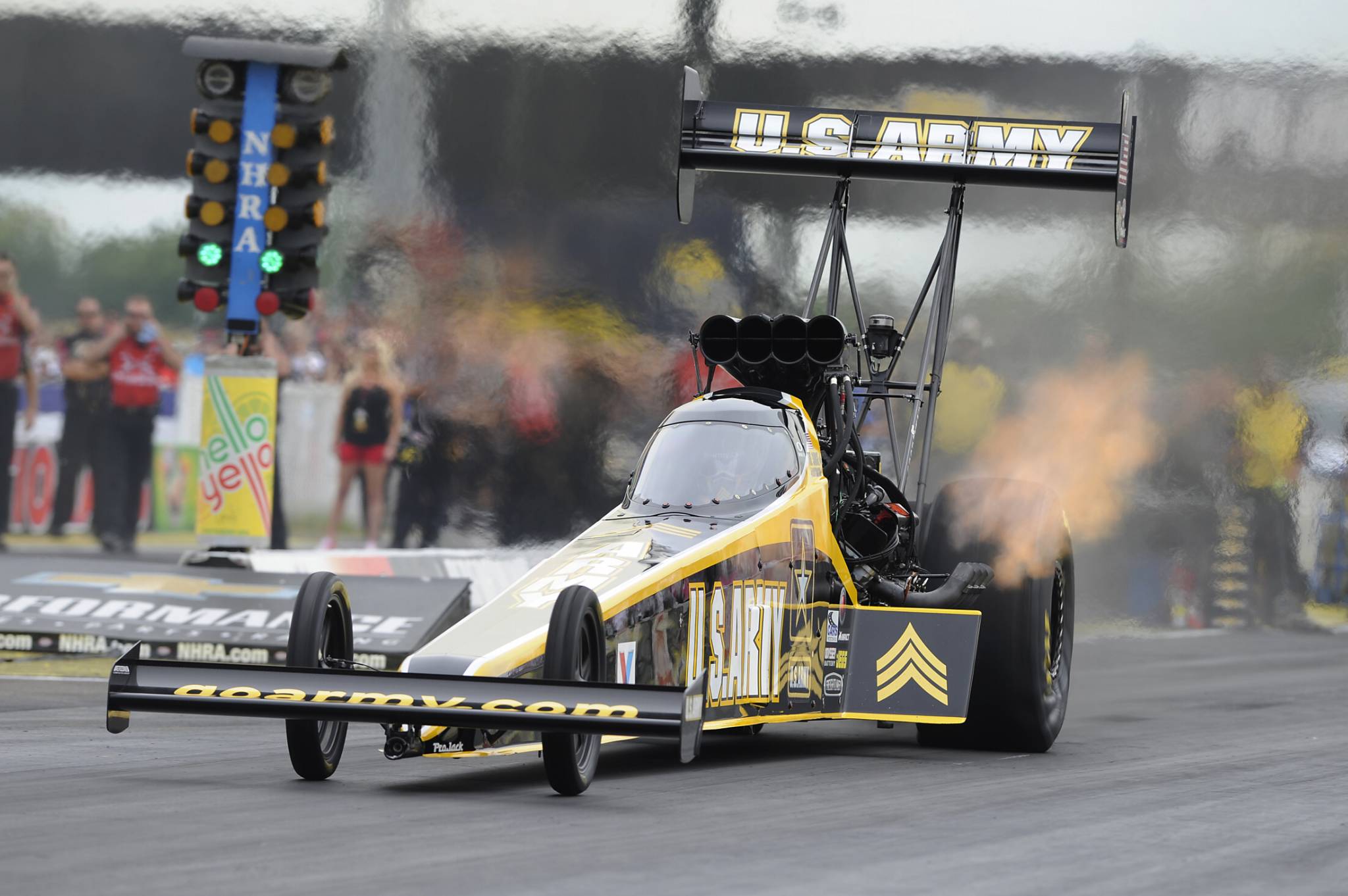 Matt Hagan blasted to the top of the speed charts with a record-breaking qualifying run in Sunday’s qualifying for the 60th annual US Nationals NHRA Mello Yello Drag Racing Series event at Lucas Oil Raceway in Indianapolis, Ind.

Hagan posted the quickest Funny Car pass in US Nationals history in the first of two final qualifying sessions held on Sunday, running a 3.998 at 318.99 mph for the first sub-four-second time ever run at Lucas Oil Raceway.

Hagan, who has never so much as made it past the semi-final round at Indy, rallied from a spectacular engine explosion in Saturday’s qualifying that had his crew working overtime getting together a new engine and a new body for his Dodge Charger.

“It was just a phenomenal run," said Hagan, “Especially after those guys (The Mopar Express Lane crew) having such a late last night when we banged the blower off of it and they had to pull another body out and another motor out."

Bob Bode took the 16th spot and will face Hagan in the opening round. Tony Pedregon was the lone non-qualifier in Funny Car.

Jason Line completed a his sweep of the weekend qualifying session and topped it off with a victory in the Lucas Oil Nationals Pro Stock final that was postponed by rain two weeks ago.

Line posted the low ET in four of the five qualifying rounds, with his pass of 6.589, 210.01 in Saturday’s first session going in the books as the top qualifier for the event. It’s the second no. 1 qualifier of the season for Line and 37th of his career.

“Our car ran very good. Our Camaro was very fast this weekend," said Line. “It was a little bit weird to win Brainerd at Indy. But it’s the first thing I’ve ever done well at in Indy."

Tony Schumacher stood on his record-breaking run from Saturday when he posted a 3.748 at 328.54 mph to break the track ET speed record. It’s the third top qualifier of the season and 75th of his career for Schumacher, who is a nine-time US Nationals winner at Indy.

Schumacher will be looking for his tenth-career US Nationals victory on Monday, but will have to get past his teammate Antron Brown, who took the bump spot and will face Schumacher in the opening round of eliminations.

“You think you’re going to run an easier car when you’re No. 1," said Schumacher of his matchup with Brown. “Before (Brown) even ran, the bump was .84. You were running a bad to the bone car no matter what. As a teammate, I’m happier he got in and I have to race him than had he gotten bumped."

In Pro Stock Motorcycle, Eddie Krawiec jumped to the top qualifying spot with the fastest pass of the event in Saturday’s opening round – clocking in with a low ET 6.829 at 196.56 mph, nearly 50 one-thousandths quicker than the second-place qualifier, Jerry Savoie.

Krawiec’s pole-winning run has his sixth of the season and 20th of his career. He will face Shawn Gann in Monday’s opening round, looking for his first US Nationals victory.

“That’s definitely one I’d look to put a check next to," said Krawiec. “We learned some stuff today. That was the key to moving onto Monday here. It’s not often you get five qualifying sessions, but when you do you need to take advantage of it."