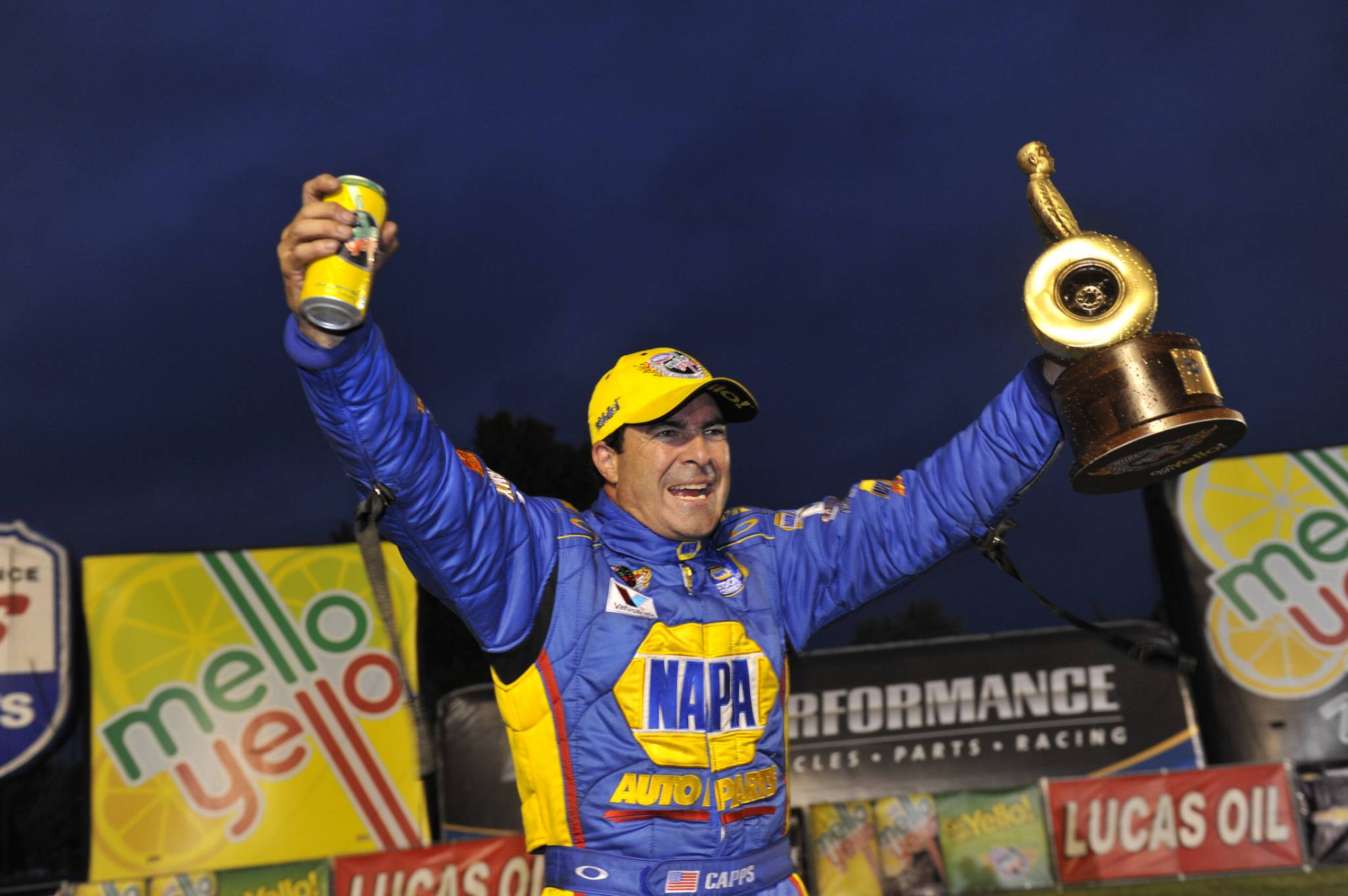 Ron Capps scored his second Funny Car victory of the season on Saturday, taking home the Wally in the postponed Lucas Oil NHRA Nationals final, which was finally concluded during Saturday's qualifying for the 60th annual US Nationals at Lucas Oil Raceway in Indianapolis, Ind.

Two weeks and more than seven hundred miles from where the Funny Car final was postponed by rain at Brainerd International Raceway, Capps beat out John Force with a pass of 4.026 at 320.36 mph over Force's 4.126, 313.88, earning his 43rd-career Funny Car victory.

"It was hard waiting all this time," said Capps of the postponed final. "It was cool knowing you were going to race Force, knowing you're going to do it at Indy of all places on a Saturday night under the lights. We knew that was going to happen regardless."

Saturday's final round took place during the third round of qualifying for the US Nationals, where Jack Beckman took over the top qualifying spot with a record-breaking low ET of 4.004 seconds at 319.07 to knock Del Worsham from the provisional no. 1 qualifier spot.

Force – who was appearing in his fifth straight final round – dropped from 11th to 14th in the field and will need to race his way into the field during the final two qualifying sessions on Sunday.

Pro Stock also wrapped up their semi-final rounds from the Lucas Oil Nationals, with Jason Line beating out Dave River with a pass of 6.589 at 210.01 mph which was enough to hold onto the no. 1 qualifier spot. Jeg Coughlin bested Vincent Nobile with a time of 6.638 at 207.88 mph to move on to face Line in the final, which will be held during Saturday's qualifying session.

"The Summit Camaro is on a rail right now," said Line. "It's definitely the best race car that I've ever had. It's taken us a long time to get here, but it's a great feeling – especially in today's Pro Stock, where it's tough to have any kind of an advantage. Right now, it feels like we actually have a little one."

In Top Fuel, Tony Schumacher retained the no.1 qualifying spot after a record-breaking pass in Saturday's final round, posting a 3.748 at 328.54 mph to break the track ET record.

"We have a huge, monumental day on Monday. We have the right car do it," said Schumacher. "I said coming into this that we tend to be the right-place, right-time car and this is the right time and the right place. We are getting stronger and better each run."

Jerry Savoie was the biggest mover of the day, jumping from sixth to first to take the provisional pole in Pro Stock Motorcycle.