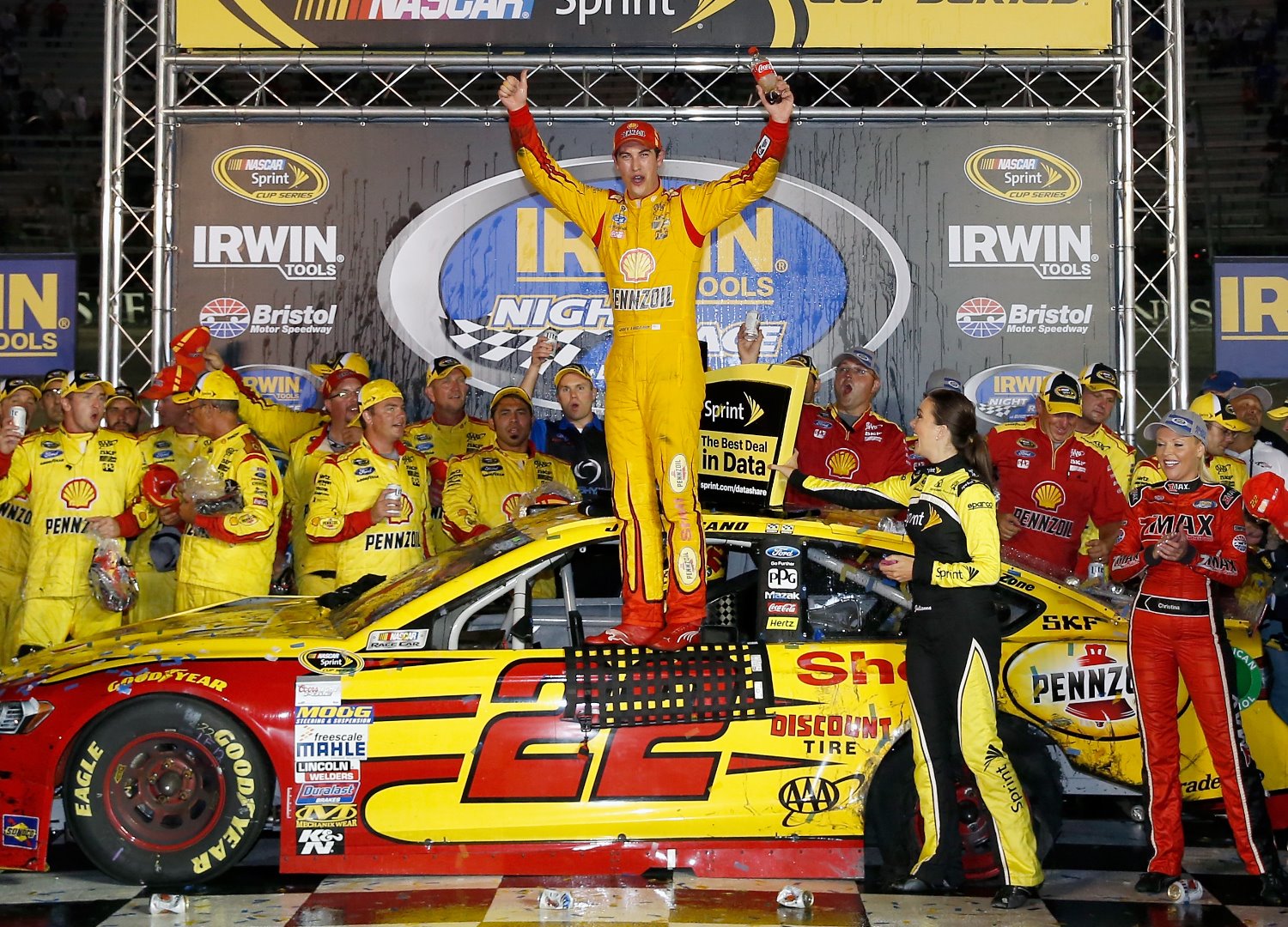 Joey Logano picked up his first-career Bristol Motor Speedway victory on Saturday night, beating out his Team Penske teammate Brad Keselowski for his third win of the season and a share of the lead in the standings for the Chase for the Sprint Cup.

Logano passed Matt Kenseth for the lead with 44 laps to go and then held off Keselowski in the final lap to secure his sixth-career Sprint Cup victory.

Kenseth held on for third, followed by Jimmie Johnson and Kurt Busch.

Logano's victory ties him with Keselowski, Johnson, Jeff Gordon and Dale Earnhardt, Jr., for the most this season, putting them atop the ladder for the Chase for the Sprint Cup field with two races remaining in NASCAR's "regular season".

"This is like one of the three biggest races of the year, and to have this in the record books with your name on it is really, really cool," said Logano, who is officially fourth in the points standings. "What a year we're having. I'm having so much fun. The past six or seven races have been unbelievable. We've been running up front and it's just been so much fun."

Logano has made the Chase field in each of his two seasons at Penske, and with three victories under his belt this season is looking like a legitimate contender for his first Sprint Cup title.

"It's definitely the best shot I've ever had at winning the championship," said Logano. "I know inside, this 22 team, this whole 22 team feels like we're contenders to win this championship. You know, it would be really weird if we didn't think we were. We've got three wins right now, we've got a good shot."

Keselowski came close to making it 2-for-3 with a desperate last-turn effort for the lead, diving to the low side of turn four under Logano, but couldn't make the move stick as Logano powered ahead on the high side coming out of four to hold on for the win.

"That was a hard night, I swear this is the most grueling race of the year," said Keselowski. "It feels good just to complete it and be able to kind of look myself in the eye and know I gave it all I had and it just wasn't enough, but I didn't fall out of the seat. I'm damn near as proud of not falling out of the seat as I am anything else, but it was a heckuva weekend for everyone at Team Penske."

For Kenseth, Saturday night's third-place finish was just another missed opportunity to clinch a spot in the Chase field.

Kenseth was running in the top five when the ninth and final caution flag waved in lap 432. Jamie McMurray, who had led a race-high 148, ducked to pit road along with Logano and Keselowski.

Gambling that racing up front in clean air was their best shot at winning, Kenseth and his crew rolled the dice and elected not to pit, instead moving up to take the lead with Carl Edwards – who also decided not to pit – restarting second.

Back under green with 63 laps to go, Logano quickly began moving up from his sixth-place position on four fresh Goodyear tires, moving past Edwards on lap 441.

Kenseth, running on old tires, was a sitting duck as Logano tracked him down, ducking under the no. 20 Toyota in turn four with 44 laps to go.

With 32 to go, Keselowski shot past to take second, sending Kenseth to third place where he finished, earning his first top five in his last four races.

Kenseth is now 13th in the Chase standings and still in position to make the Chase even if he doesn't collect a win in the final two races.

"I wanted to win that thing in the worst way, but I just couldn't hold them off," said Kenseth. "I just knew that clean air was going to be worth more than new tires. Maybe we could have gotten tires and beaten those guys — we'll never know. I knew when they lined up a couple rows behind me that it was going to be hard to hang on with old tires. We had to at least go down swinging."

Throughout Saturday night's race, the concrete coliseum at Bristol lived up to its reputation as a meat grinder, with several of the Chase contenders going home early.

Among the early exits was Denny Hamlin, who came into Saturday night's race seeded eighth in the Chase but fell out after contact with Kevin Harvick sent him spinning into the inside wall on the frontstretch, where he then caromed off and collected Earnhardt., Jr.

Both drivers were unhurt, but Hamlin showed his displeasure with Harvick by chucking his HANS Device at Harvick's car.

Kyle Busch also got caught up in an earlier incident with Clint Bowyer and spent some time behind the wall before finally dropping out of the race and finishing 36th.

Jeff Gordon finished 16th and retained the overall point lead by 27 points over Earnhardt, Jr. Keselowski is third, followed by Logano and Kenseth.

Kenseth leads the wildcard standings among the drivers without a win looking for a spot in the Chase. Ryan Newman is 14th ahead of Clint Bowyer and Greg Biffle. Kyle Larson, Kasey Kahne, Austin Dillon and Paul Menard are all still in the hunt with two races to go before the cutoff for the Chase.