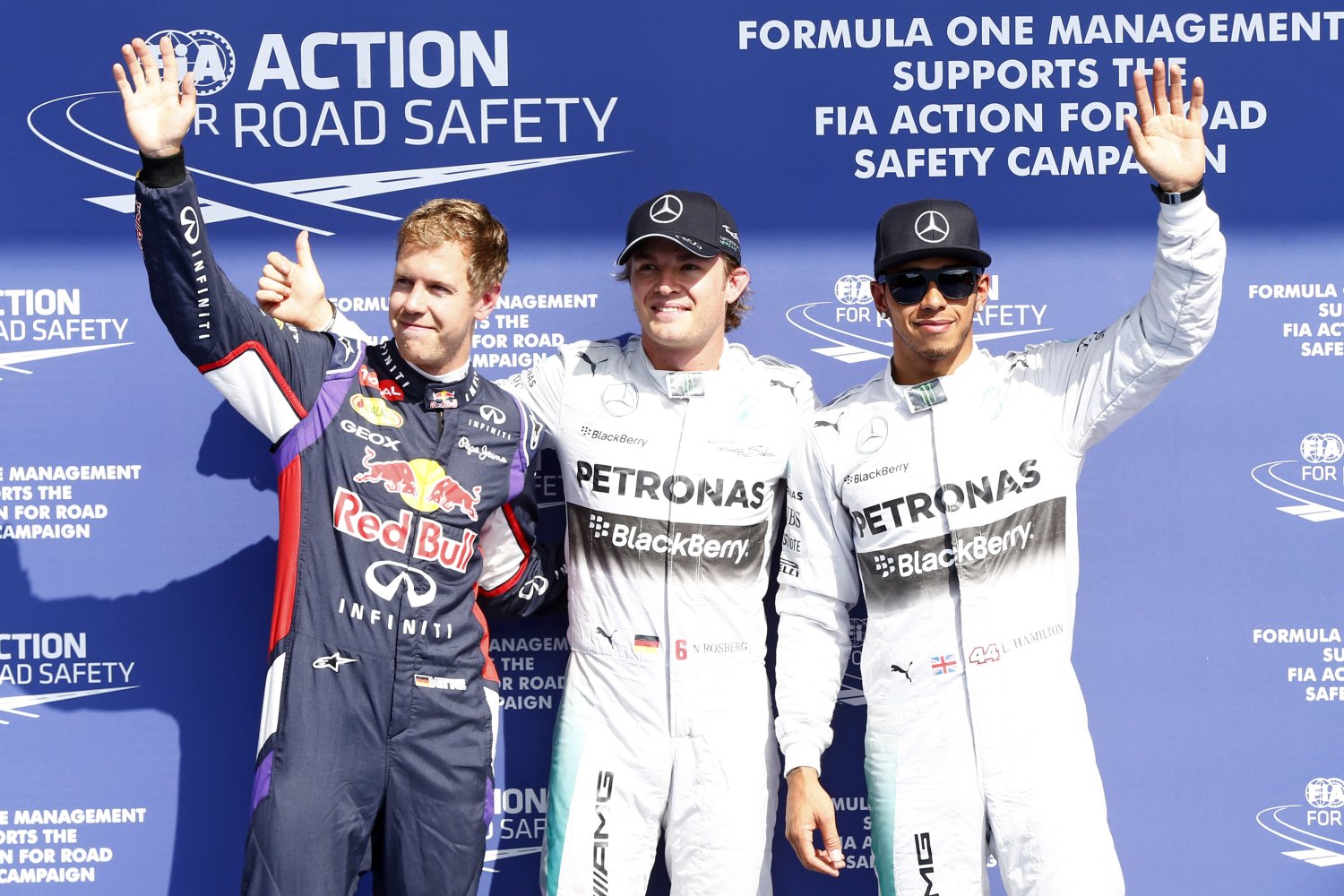 Q: Nico, many congratulations, your first Spa pole. Typical Spa conditions of course today, tell us how special the feeling is right now?

Nico Rosberg: Yeah, it's awesome definitely at this track. It's one of the most special tracks of the year, so to be in front here is great. Not quite as difficult out there as on some other occasions as the conditions were pretty much always intermediates, just varying slightly, so that made it a bit easier today. But still, it's always difficult on this track in the wet, so I'm really, really happy. The car was handling well and together with my engineers we fine-tuned it perfectly now in qualifying and really got there in the end. So, in the end I was really feeling comfortable and able to push, so fantastic. But it's only qualifying, so still a long race tomorrow but of course, very happy.

Q: In terms of the detail, the first sector was always particularly strong for you throughout this qualifying session, why is that?

NR: I'm not sure, it's Eau Rouge mainly the first sector you know. I was feeling good through there, really going for it and maybe that's where the time was done. I haven't looked.

Q: Very well done. Coming to you Lewis, you were right in the hunt all the way through qualifying but it seemed, if anything, Q3 wasn't quite as comfortable for you from the outset as the previous sessions had been, why was that?

Lewis Hamilton: I had a glazed front-right or front-left brake, so the car was pulling to the left or to the right and there was nothing I could do on the out laps to try to get rid of that, so I was struggling under the braking. I had to bring the braking point a little bit further back and I was losing massive amounts out of particularly turn one.

Q: Before that it looked like you were enjoying yourself out there, though. How much can you enjoy driving in conditions like these?

LH: It's more fun in the dry but it's still a huge challenge and as Nico said the conditions were quite good so…

Q: Coming to you Sebastian, you were a winner here last year for Red Bull Racing. Your feelings on this result and what you can do from here tomorrow?

Sebastian Vettel: Well, I think it would be nice to be a bit further up but obviously the gap is quite big. I think it was the best we could do for today. I think it was a tricky qualifying, especially Q2 looked very tight for us. I tried to stay out on the same set of tires. It started to rain heavier, so I was quite confident that the track won't get quicker and I wanted to save that extra set for Q3. It was quite tight. I got the lap in in the end because the circuit did pick up and in Q3 I was able to use both sets of tires. It was obviously very tight behind the Mercedes. It was tricky out there, especially on low downforce, especially through Eau Rouge, so I had a couple of moments. But it was a good challenge and for sure happy with third.

Q: Coming back to you Nico. You've never been on the podium before in Spa either. Clearly a big fight in prospect tomorrow in what promises to be, at the moment anyway, a dry race with Lewis and Sebastian. Your thoughts on tomorrow's grand prix?

NR: Again, we have a great car here. We're leading the way and that's so cool to see that, definitely, that the team is doing such a great job. Just keeping it going all the time, staying ahead and keeping that gap. That's nice to see. So yeah, definitely a really good chance tomorrow. I need to get a good start and from there I'm looking forward to it.PRESS CONFERENCE

Q: Nico, one of the things that was noticeable from the outset of this session – obviously it was very wet, had been very wet before the start of the session – was the performance difference between the Mercedes and the rest, right from the outset of Q1. You've been quick obviously all season but was this about downforce? Was there any specific reason in your mind why you had such a big advantage all the way through?

NR: I have really no idea. It was amazing to see that, how quick our car is. That was really great. Obviously then it was just Lewis I had to focus on, and that makes it a bit easier too -when there's not a whole bunch, just one guy. Yeah, but really impressive car.

Q: Lewis, you've got to go back to Canada in June for the last time you were this far up the grid. It's been a difficult period of time for you on Saturday afternoons. So, although I'm sure you're disappointed today, nevertheless this gives you the kind of platform you've been looking for on Sunday to challenge, right?

LH: I'm not disappointed today actually. If you look at the previous years, P2 is the best place to start here so I feel quite blessed that this is the case. I started on pole here last year and Sebastian flew past me down the top straight, so I think it gives you the most opportunity here at the start. And I'm just happy to be up here. I was nervous going into qualifying, not knowing if the car was going to make it through it, and grateful for all the hard work the team put in to make sure we have no problems. It's a great feeling to be back up here.

Q: Sebastian, you mentioned driving this circuit, in these conditions, with low downforce and it did seem that Red Bull had decided to run quite low levels of downforce, obviously thinking ahead to tomorrow's grand prix. Is that the case?

Q: And how did that feel? A gamble clearly…

SV: It was very tricky in the wet. We knew it would be even trickier obviously when qualifying is wet, qualifying was wet so we can confirm it was trickier – but the reason behind it is fairly simple: we know that we are down on power, obviously Mercedes can run a lot more wing level and they have a very strong car this year, you have to admit, so they have a lot of downforce but they can still take that wing onto the straights. If we do that I think we are similar in the corners but quite a long way off on the straights and therefore vulnerable in the race. So, I think that's the reasoning behind it, and in the wet probably it hurt us a bit more, but hopefully tomorrow we'll be closer in terms of race pace and closer to them than in the last couple of races.

Q: (Angelique Belokopytov – AutoDigest) Sebastian, you are a four time champion and this year you've never won a pole so how long can you, a champion, live with that?

SV: As long as I have to, I guess. I'm trying very hard so it's not like I'm deciding consciously not to qualify on pole. Obviously these guys are doing a very good job from the drivers' point of view, their team is very strong so that is what makes them very difficult to beat. Obviously we've been on the other side for quite a while but that's the name of the game. Obviously my season wasn't the way I was hoping for but there are still some races to come. I think we did the maximum today so I'm hoping for a strong result tomorrow.

Q: (Vladimir Rogovets – Sb Belarus) Nico, to your left is one champion, to your right is a second champion but today you have pole position. How do you feel here between two champions?

NR: I feel very good but not because it's Lewis and Sebastian. To me they're competitors like all the others: great drivers. I'm just happy to be first; first is the best position for tomorrow's race.

Q: (Paulo Ianieri – La Gazzetta dello Sport) Nico, this morning the Williams were pretty fast and many people were expecting them to be a challenge in the dry. Do you think that having a wet qualifying helped you a little bit to keep them away or you just were hiding a little bit this morning?

NR: I think even in the wet we would have been strong. Maybe the others would have been a little bit closer. It's very difficult to say who exactly, I'm not too sure about that but for sure it helped us that it was wet because in the wet, clearly the gap was a lot bigger and our car was really dominant.

LH: I don't really know. Today, this is a circuit where – as on all circuits – you need to have confidence in the brakes. You saw a couple of times in Q3 when I was just going straight on everywhere because the left brake wasn't working and then for some reason – I don't really know why – it went into glazing but yeah, I've had some good experiences and bad experiences but it's OK. Who knows, it might be a blessing in disguise.

Q: (Sven Heidinger – Sport Woche) Lewis, do you fear that the issue with the brakes will appear again tomorrow or was it a one-off? What do you think?

LH: Well, when it glazes, it's sometimes very hard to recover, especially in the wet. You have to put the brake balance forwards but whilst you're trying to clear that, you're also overheating the rears so it's really not that easy to always clear but in the evening they're able to scrub it and get rid of the glazing. I think it goes shiny and then you lose that bite so hopefully over the evening we will lose that and in the dry tomorrow it shouldn't be a problem.