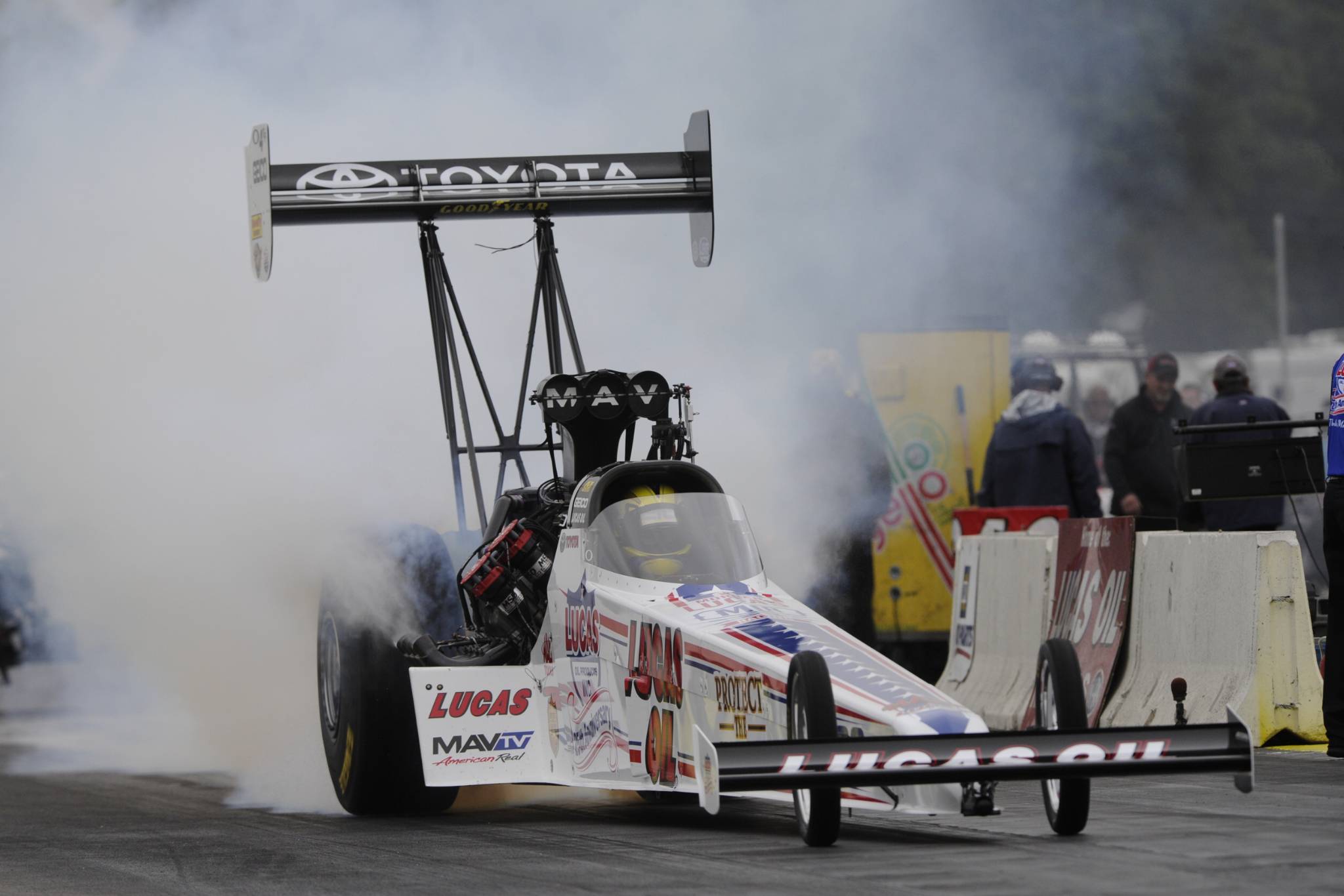 The Funny Car final round between John Force and Ron Capps, along with the Pro Stock semifinals and final was postponed by NHRA officials due to darkness and inclement weather following a day filled with multiple rain delays. Racing in those categories will be completed during designated qualifying rounds at the 60th annual Chevrolet Performance U.S. Nationals, Aug. 27-Sept. 1 at Indianapolis.

Lucas was on and off the throttle of his 10,000-horsepower Lucas Oil / GEICO dragster as the engine erupted in flames when it crossed the finish line just in front of series points leader Doug Kalitta’s charging Mac Tools dragster. Both machines lost traction early in the thrilling side-by-side final round run, but Lucas was able to guide his machine to victory, the 10th of his career.

Lucas, who is running a limited schedule this season, won from the 12th qualifying position and outran Bob Vandergriff, Steve Torrence and Antron Brown en route to the final round. In his semifinal win over Brown, Lucas clocked a career-best elapsed time of 3.729 seconds.

"It’s fun," Lucas said. "This is really what I was hoping it would be, just to come out here and have fun, and when you go rounds that is just the added value to it. I am just really lucky that Lucas Oil and GEICO support me. Racing guys like Doug (Kalitta) and Antron (Brown), they are number one and two in points, they are the best. To win this race again is just a really cool feeling."

When the Funny Car final is held at Indianapolis during the second qualifying session on Saturday, Force will be racing in his fifth consecutive final round appearance of the season, and will once again be trying to defeat longtime rival Capps. Force, an 11-time Brainerd winner, advanced to the final by defeating Bob Bode, Del Worsham and Tommy Johnson Jr. Four-time BIR winner Capps reached the final with round wins over Jeff Arend, Jack Beckman and Alexis DeJoria. This is the third consecutive BIR final for Capps, who has won this race the last two seasons.

Although unofficial until completion of the event, Force took over the Funny Car points lead following his semifinal win over Tommy Johnson Jr. and leads Hight, who lost in the first round, by 18 points.

A new unofficial Pro Stock points leader also emerged in Brainerd as Jason Line raced to the semifinals in his Summit Racing Equipment Chevy Camaro. When Pro Stock racing resumes at Indy Line will face surprise semifinalist Dave River, who raced past Erica Enders-Stevens and Dave Connolly in the first two rounds. Vincent Nobile and Jeg Coughlin will decide the other Pro Stock semifinal. The Pro Stock semis and final will be contested during the two Sunday qualifying sessions at Indy.