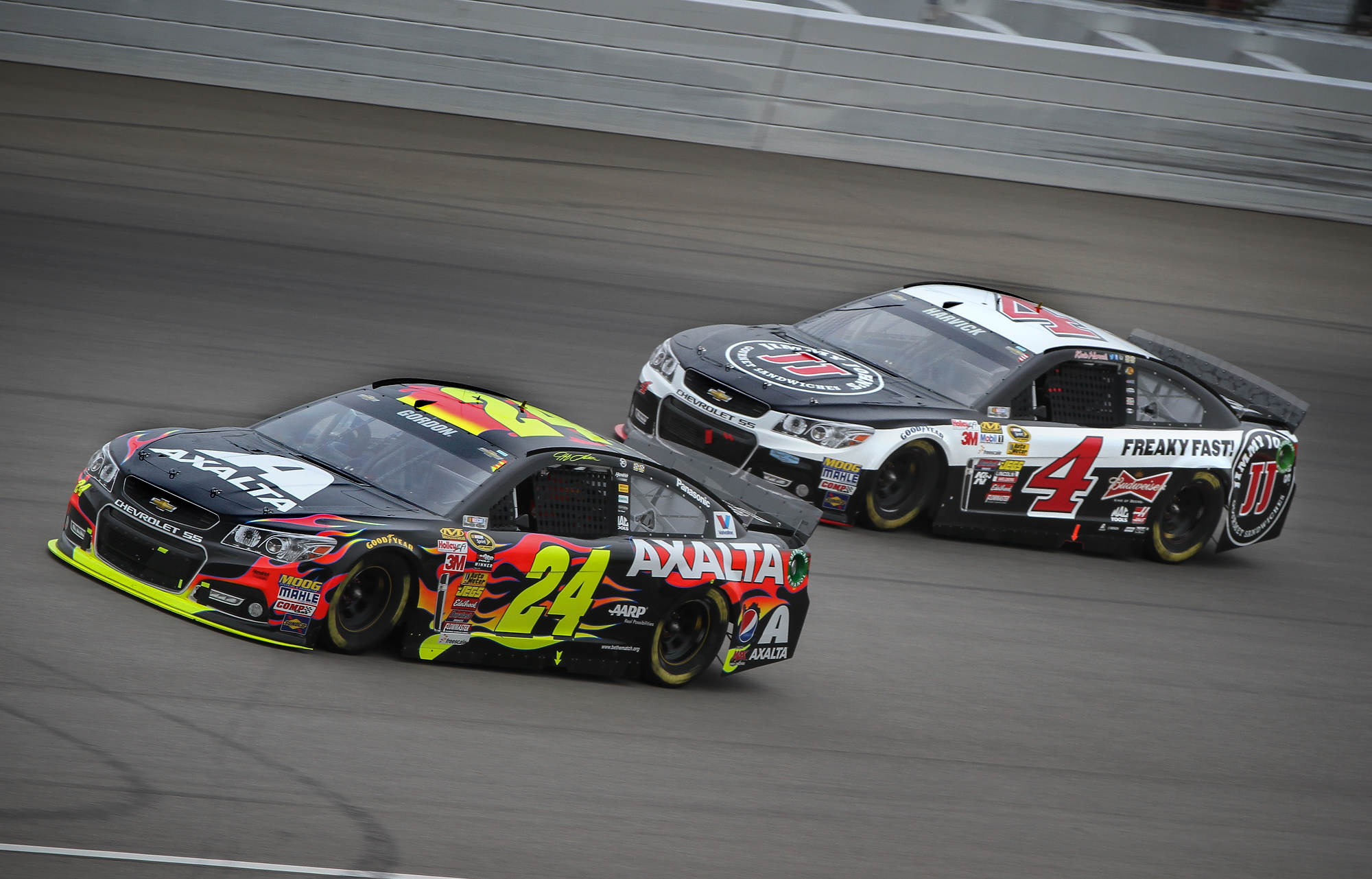 Jeff Gordon passed Joey Logano on a restart with 17 laps to go and held off the field to win the Pure Michigan 400 NASCAR Sprint Cup Series race on Sunday at Michigan International Speedway.

Gordon has 91 career wins on the premier circuit, which ranks first among active drivers and third all-time. It was the third time he's won at Michigan, and the first time in over 13 years.

Keselowski finished eighth and Johnson, who won at Michigan two months ago, was ninth.

The Sprint Cup Series is at Bristol Motor Speedway next Saturday (Aug. 23) for the Irwin Tools Night Race (7:30 p.m. ET on ABC).

JEFF GORDON, NO. 24 AXALTA CHEVROLET SS – RACE WINNER
IT'S BEEN 13 YEARS SINCE YOU'VE BEEN TO VICTORY LANE HERE AT MICHIGAN. YOU HAD TO ASK WHERE IT WAS. ON THE RESTARTS:
"It wasn't easy. It's never easy to win at any of these tracks, especially when aerodynamics and track position mean so much. I thought we learned a lot the last time we were here on track position. Alan (Gustafson, crew chief) just called a perfect race. I kept getting on that inside lane and just not getting very good restarts. I knew it was going to get exciting with Kurt (Busch) and Joey (Logano). Those two are very, very aggressive; and of course Kurt got loose. That last restart was it. We had the car to win. Our car was amazing. But whoever got out in front had such a huge advantage. I got a good restart and Kevin (Harvick) for some reason, wasn't getting good restarts, so Joey was sort of out there by himself and I was able to get to his quarter. When I got to his quarter, I dragged him back and I was able to shoot to the bottom and get by. But he made a heck of an effort. I thought he was going to get back by me; he almost did. And I just needed a couple of laps for my tires to come in and all of a sudden we were out front and setting sail and the checkered flag was waving. This is just unbelievably awesome. I've got to say hi to Ingrid and Ella and Leo back home. They couldn't come today. But we're celebrating your honor here and this is just amazing. This is fantastic.

WHAT IS IT ABOUT THIS CAR AND THE RULES PACKAGE THAT IS PLAYING INTO YOUR HANDS THIS YEAR?
"It's everything. It's Hendrick Motorsports and the job that they do, collectively, with all of our teammates and the engineers. Everybody who is building the chassis and the bodies and the cars back at the shop; the engines are amazing. And then, I've got to give so much credit to Alan Gustafson and his crew. This guy is a great leader. I knew that he had this in him and he's just been showing it by bringing great race cars every weekend. Today it was more than just a great race car, it took the whole team effort and making great calls and of course, I had a good restart again. That was fun. And these guys; they're just awesome. Rick Hendrick is here and I love celebrating wins with him."

TALK ABOUT THAT LAST RESTART AND HOW YOU WERE ABLE TO GET BY JOEY LOGANO:
"Well I had a couple of different ones that didn't go so well today. On that inside lane it was tough. Joey was so aggressive and good on the restarts. His car could really take off. But Kevin (Harvick) behind him was having a little bit of trouble on the restarts so he kind of got out there on his own and I got a really good start and I just got to his quarter just before we got to turn one, his left-rear. I was able to drag him back a little bit and when that happened it just gave me the momentum and allowed me to get ahead of him. I just didn't lift. Went to the bottom, didn't lift. I was on the inside of him on a previous restart and I kind of learned what not to do on that one. I knew my car was good enough, but even when we got out front with this Axalta Chevy SS Joey had a good run at us. His car was just turning so good at the beginning of a run that he got back to my bumper got me loose and I thought it was over at that point. Luckily I was able to stay on the outside of him and had a little push from Kevin (Harvick) that time to get by him."

TAKE US THROUGH THAT MOVE:
"He could just attack the entry of the corner. Those Penske cars all year long have been able to drive in the corner so deep and get the car to turn for whatever reason we seem to be better than them on the long runs. I knew getting out front was going to be a huge advantage. I tried to hedge toward the bottom. I knew that was the way it was going. I just had to lift early to keep the front-end cutting. When I did he got to me and it started loosening up the back end. I tried to stay in the gas as much as I could and keep as much momentum because I knew he was going to get inside of me and I was just hoping I could stay with him and I was able to. When I was able to stay on his quarter panel and when Kevin got behind me it just gave me a big shove and push into turn three. Those guys got side-by-side and at that point I knew it was over if we just could get to the checkered flag."

IT'S BEEN 13 YEARS SINCE YOU WON HERE. IT'S ALSO BEEN 13 YEARS SINCE A CHAMPIONSHIP YOUR THOUGHTS ON THE DRIVE FOR FIVE NOW AS YOU HAVE WON A THIRD TIME THIS YEAR AS YOU ARE BACK IN THE POINTS LEAD?
"As I told you before the race started our Chase has already started. This team is championship caliber, but we have a lot of work to do. It's going to be tough and we want to put ourselves in the mindset of right now we are in it. We don't want anything to change and do anything different when we get to Chicago. Other than keep going and charging for those wins. That is what we did today. I'm just so proud. Thanks to all the fans. We had an awesome Michigan crowd here today. To win here in Michigan in the backyard of Chevrolet driving this Chevrolet SS is always special."

KEVIN HARVICK, NO. 4 JIMMY JOHN'S CHEVROLET SS – FINISHED 2ND
"First thing I want to do is thank Jimmy John's, Budweiser, Outback, Chevrolet and everybody at Stewart-Haas for doing all they do. The guys did a great job. The No. 24 (Jeff Gordon) just had us beat today. He had a really fast car. My car handled great all day through the corners, but just seemed like he had a little more speed than we did. All in all a good day for us. We just have to keep clicking them away and keep being consistent and the wins will come."

THIS WAS YOUR FOURTH CONSECUTIVE TIME OF FINISHING 2ND; TAKE US THROUGH YOUR DAY
"Our car handled great all day; we just didn't have the speed that the No. 24 (Jeff Gordon) had. I felt like we could race with the No. 22 (Joey Logano), but just not with the No. 24. But all in all, it was a good day for the Jimmy John's Chevrolet; I'd like to thank Budweiser, Outback, Chevrolet, and Mobil 1 for all they do and everybody at SHR for keeping their heads down and doing everything they can do to keep these cars running fast. We've been very consistent for the last month. That's really what we were looking for and speed is still there. We've got a little bit of work to do, but all in all we're making headway."

ON THE FINAL RESTART, WHAT A MOVE YOU MADE TO GET TO THE OUTSIDE OF THE NO. 22 CAR. HOW CONFIDENT WERE YOU THAT THE CAR WAS GOING TO STICK AND THAT YOU COULD MAKE IT WORK?
"I didn't have any trouble with my car sticking all day and I could be really aggressive with the car through the corners. But, the No. 24 and the No. 22 kind of got jammed up a little bit there and I was able to get a good run. The No. 22 tried to move up, but I was going to stay in the throttle one way or the other. We don't have anything to lose at this point and that was our only chance to have a win."

PAUL MENARD, NO. 27 CERTAINTEED/MENARDS CHEVROLET SS – FINISHED 4TH
WHY DO YOU RUN SO WELL HERE AT MICHIGAN?
"Our cars are really good. The RCR fab shop, the ECR engine shop they make really good race cars. This track kind of suits my driving style I guess. Sluggar (Labbe, crew chief) and I, Justin and James and everybody on the No. 27 car have a good baseline intermediate track package that seems to work good at these fast tracks. Definitely needed a good run the last three or four weeks have been pretty brutal. We definitely needed this."

DALE EARNHARDT, JR., NO. 88 NATIONAL GUARD CHEVROLET SS – FINISHED 5TH
"It was pretty good. We got in some trouble on pit road and ended up moving the steering wheel around and bending some things up. Hurt our car just a little bit and cost us. We had a real fast car just coming through the field real easy. Great motor and had a good day. We finished about where we should have. I don't know if we had enough to win the race had we not had the trouble on pit road, but the steering wheel moved about a quarter turn so something in there is bent pretty good."