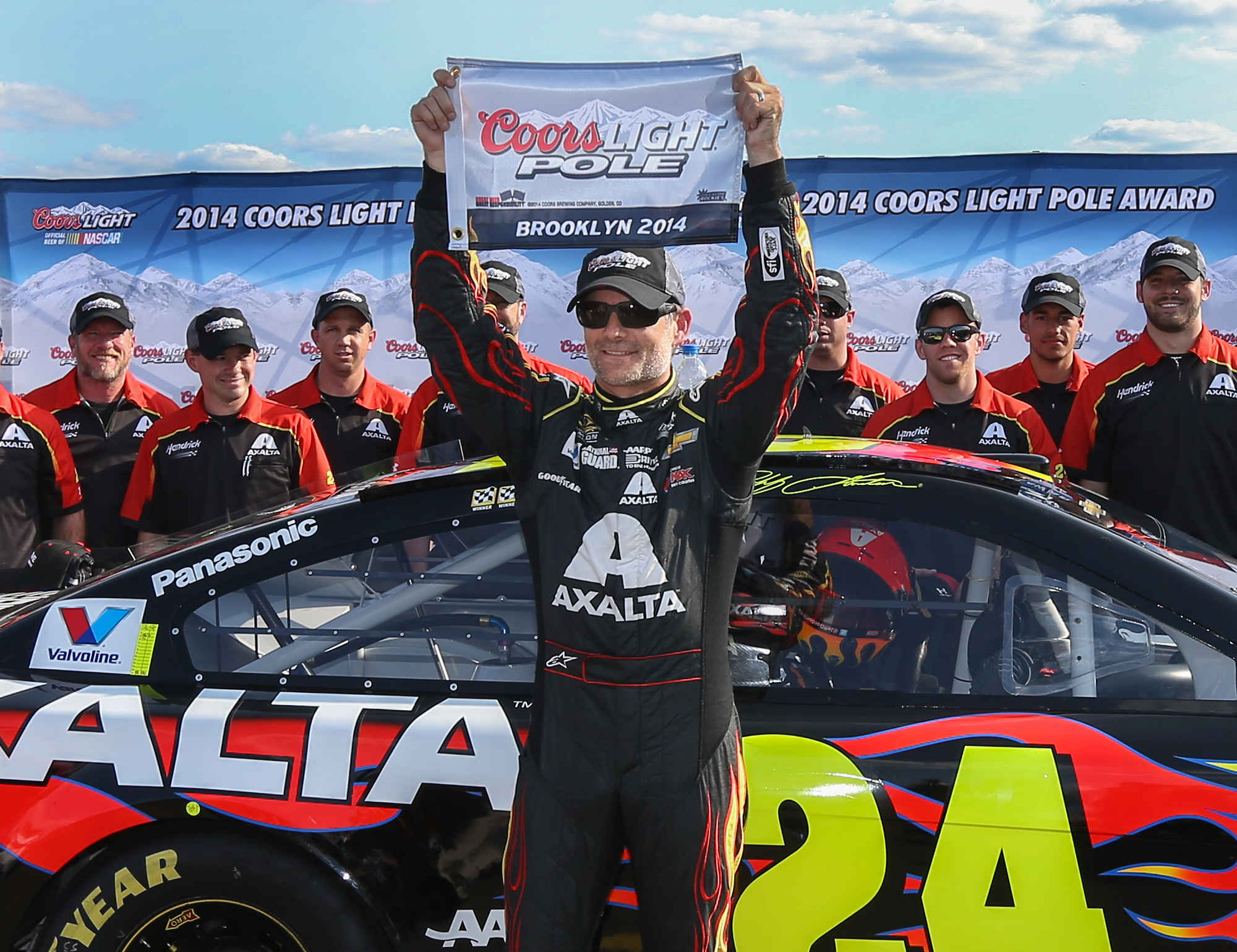 Jeff Gordon, driver of the No. 24 Axalta Chevrolet SS, set a track qualifying record en route to winning the pole for the Pure Michigan 400 at Michigan International Speedway on Friday. Gordon turned in a fast lap of 206.558 mph around the two-mile oval. It is the seventh-fastest qualifying speed in NASCAR Sprint Cup Series history.

"I knew that we were really strong here the last time we were here and what our team is doing right now it's just phenomenal how they continue to improve race cars and just the whole effort. I'm just so proud of them. You don't go around this place like that, that fast without a really good race car. Thanks to Axalta, Drive To End Hunger, Pepsi, Chevrolet, everybody that made this possible. I'm so excited about the way our race team is performing right now," Gordon said following his second pole of the season and 76th of his career.

The pole was the 12th for Chevrolet this season.

MODERATOR: "We are now joined by our pole-winner for Sunday's Pure Michigan 400 here at Michigan International Speedway, Jeff Gordon, driver of the No. 24 Axalta Chevrolet SS. Jeff won the Coors Light Pole Award today with a speed of 206.558 mph. This is the 17thqualifying record set during the 2014 season and this is Gordon's 76th pole in 748 NASCAR Sprint Cup series races, which is third on the all-time series pole list. Talk a little bit about your run out there.

GORDON:
"It was obviously a great run. The car was just phenomenal. I was in here (Media Center) earlier after practice and so I was a little unsure of what we were going to have come qualifying. But the car was just phenomenal. The first session, the Axalta Chevy, I just didn't get all of it. The car was there and it had more speed and it had more grip, I just wasn't sure how aggressive I could be because of some of the grip issues we were having in practice. So, when I felt that, I was pretty excited. I knew it was a good lap and was hoping it would hold on so we didn't have to go make another run. And that's the way it ended up working out. The second run, I was able to get pretty much all of it and it just stuck great. The third run, we just had to make a slight adjustment, a couple things, and the car again was phenomenal. It feels great. What an awesome job by this team. The cars have just been phenomenal and I am having such a blast driving them right now."

YOUR LAP RECORD IS TWO MILES FASTER THAN THE PREVIOUS RECORD SET BY KEVIN HARVICK. WHAT IS THE MAIN REASON? AERO PACKAGE, TIRES, CAN YOU POINT ON SOMETHING?

"Yes. Well, I don't know where to start first actually. You can point at the race track. This track is smooth. There is a tremendous amount of surface area where the tire can get a lot of grip to it. And the next thing is the cars. You've heard about how many poles have been track records this year and that's a testament to the things that the teams and NASCAR did over the off-season. It's a great looking car, but it also performs very, very well with the ride heights being lowered down, a little bit extra spoiler, and we're always trying to find more horsepower. So, all of those things contribute to how fast we're going around here. It doesn't feel that fast, I'll be honest. It feels fast through the corners. I know that I've gotten a tremendous amount of throttle in it and I'm carrying a lot of speed, but at the same time, when you're carrying that much speed through the corners you don't feel like you're going that fast (laughs) down the straightaways. There's not a big acceleration or change. So, it only really kind of gets my attention when I look up there and I see the speed because on the track you don't realize you're going that fast."

IN JUNE, YOU TIED FOR THE MOST LAPS LED IN THE FIRST HALF OF THE RACE. HOW DO YOU EXTEND THAT TO THE ENTIRE RACE THIS TIME?

"I totally agree and that's our main focus right now. We had a good race car the last time we were here; a very good race car, a winning car in my opinion. A lot of it was restarts. We just did not get the restarts that we needed. That's on me. And then, maintaining track position; so a little bit with some pit strategy and how we're going to strategize for this race. We learned a lot the last time we were here. You can't predict the cautions; it's not like a road course. You can almost run this race like a road course, but not quite with the speeds that we're carrying. So, I'm looking forward to spending some time with Alan Gustafson and our engineers talking about what we can do to maintain that track position from a pit strategy standpoint, and then I know they're going to be leaning on me hard to try to also maintain that on the restarts."

ASSUMING THE CONDITIONS WERE RIGHT, WHAT WOULD THIS CAR DO ON ONE OF THE PLATE TRACKS?

"Oh, without a restrictor plate? I think you'd be surprised. It wouldn't be a lot faster than that just because you kind of have terminal velocity, you know. The car has a tremendous amount of grip and downforce, but it also has quite a bit of drag to it. So, if they allowed us to play around with it now, and do some things with the spoiler and lay it down because we just don't need that much downforce at a place like Talladega. We could go extremely fast. I would say, I don't know, 230 or 240 mph; or faster. I don't know. I wouldn't want to do that. Don't get me wrong. I don't want to be driving it when it's going that fast. But, with this spoiler where it's at right now, we'd only be a little bit faster than that."

TALK ABOUT THE MOMENTUM THAT YOU GUYS HAVE HAD. WHAT HAVE YOU DONE, INTERNALLY, TO KEEP THAT GOING? WHAT CAN YOU DO TO KEEP IT GOING UNTIL THE END OF THE SEASON?

"Things like today and things like we did last week. Right now we're in that position where we just continue to elevate the quality of the cars and keep trying to address issues that we had earlier in the season where we needed to qualify better and race better. Just looking at the total team and how we're approaching each race and what we can do better. And as long as we keep bringing race cars like this, and they just continue to push hard at making them better each time we come back, and we see the results paying off, it just builds the confidence up in all of us in what we're doing. And you can go to the race track with confidence and fine-tuning instead of searching for big chunks here and there. We've talked about confidence in the past. You can't just have all this confidence and not have the car to go along with it. You've got to have the whole package. And right now, I feel like we're bringing the whole package. And last week, actually, with what happened to us in the race, actually that was something that we want to make sure that if it's happening, it happens now and we get it fixed so we don't have that happen again when it's crucial in the Chase. And we just want to keep this momentum going right into the Chase and hopefully all the way through it."