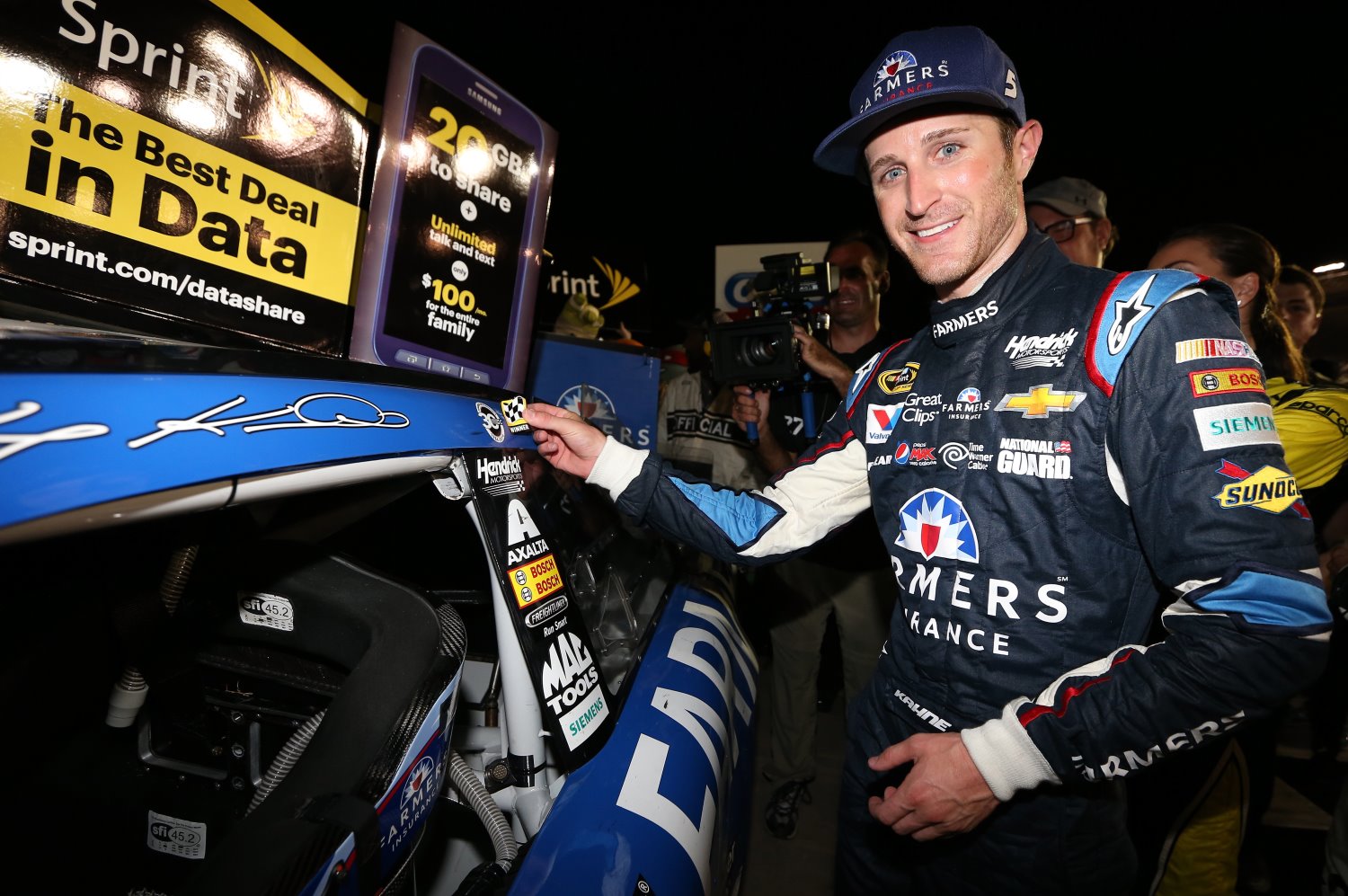 Kasey Kahne finally broke through to collect his first win of the 2014 season and punched his ticket into the Chase for the Sprint Cup and a chance for his first career Sprint Cup championship.

Kahne grabbed the lead following a restart in the second green-white-checker overtime session, sweeping past Matt Kenseth and then holding him off through the final lap to cap a wild finish in a race that saw two caution flags, two overtime shootouts and three lead changes in the final 10 laps.

Kenseth settled for the runner-up spot, but clinched a spot in the Chase field on points. Denny Hamlin, Jimmie Johnson and Carl Edwards rounded out the top five.

The victory was the 17th of Kahne's Sprint Cup career and his first since Pocono in August of last year, snapping a 39-race winless streak.

"It's just an unbelievable way to make The Chase. And to win at Atlanta, it's a tough track, a track that I love coming to. And so, it feels really good to get a victory here tonight," said Kahne. "We were all over the place during the race but the guys stayed with me and worked hard

"On those restarts – I didn't know what would happen because I had great restarts all night and I struggle with restarts a lot. Restarts just really worked out for us tonight. The acceleration of my car and everything was perfect. That's big, because that is one of the things you have to be good at and it worked really well tonight."

Kahne's victory salvages what had been a dismal season – 13th in points with only two prior top-five finishes and, more importantly, on the outside looking in for the championship battle.

Kahne locking himself into the Chase puts all four of Hendrick Motorsports entries in the Chase field, with Kahne's teammates Johnson, Jeff Gordon and Dale Earnhardt, Jr. all in line for the top seed with three wins apiece.

"It's been tough and we have had kind of a downer year at times and then we started running really good," said Kahne. "Last week we were really fast at Bristol and then we had a problem. So it's been kind of one thing after the other but we are in the Chase with my teammates. I have a great group of teammates, it's awesome to work with those guys and to be part of Hendrick Motorsports and everything that Mr. H (Rick Hendrick) gives us. Glad we are in the Chase and we can race them now."

Although Kahne proved to have the car to beat on the late stages of the race, he was largely under the radar for most of the event, running back in the top 15 while Kevin Harvick dominated up front, leading a race-high 195 laps.

Looking to make it two in a row after winning Saturday night's Nationwide Series race, Harvick led up until lap 298 when a caution flag brought the field to pit road, with Hamlin getting out ahead of Harvick and Kahne for the start with 23 laps to go.

At the start, Kahne muscled his way to the outside to the go three wide past Hamlin and Harvick to take the lead.

Harvick gave chase, but faded after a few laps, giving Kahne was looked like an easy cruise to the finish until Kyle Busch and Martin Truex, Jr. got together on the backstretch with two laps to go, setting up a three-lap, green-white-checker duel to the finish.

The caution flag brought the leaders to pit road, with Kenseth winning the battle out of the pits with a two-tire stop along with Paul Menard, followed by Hamlin, Harvick and Kahne on four fresh tires.

When the green flag waved for the first GWC, Menard and Harvick both got off to a bad start, forcing Harvick to the high side where he was pinched into Joey Logano, turning Harvick's car into the outside wall and setting up another attempt at a green-white-checker finish.

Now restarting in third position, Kahne took off like a man on a mission on the second GWC, using the same three-wide move to get past Hamlin before moving up to go door to door with Kenseth.

As the two came out of turn four looking for the white flag, Kenseth bobbled slightly, allowing Kahne to slide past on the outside to take the lead right at the stripe.

"I had a really good restart the first time. I was kind of hoping it went green there because Paul (Menard) was in there and the 5 (Kasey Kahne) and the 4 (Kevin Harvick) were stuck at the top, but that didn't work out," said Kenseth. "The second (restart) was okay, it wasn't good, just spun the left rear (tire) a little bit and the 5 got up the middle there and I was able to get to (turns) one and two wide-open and almost wide-open through there and cleared him but somehow he was able to get back up alongside me. We did all we could."

With Kenseth and Kahne now locked in the Chase, only two more spots are up for grabs at the final "regular season" race next week at Richmond with Ryan Newman and Greg Biffle currently holding the 15th and 16th positions.

Clint Bowyer, who came into Sunday night's race 15th on the Chase grid, fell out of the top 16 after transmission problems put him behind the wall, relegating him to a 38th-place finish.

Tony Stewart, driving in his first race since his involvement in a fatal accident at a sprint car race three weeks ago, finished 41st after being caught up in an early incident with Kyle Busch and then blowing a tire on lap 173 which put him in the wall and out of the race.

The Federated Auto Parts 400, which serves as the regular-season finale, is scheduled for Saturday at 7:30 p.m. (ABC) at Richmond International Raceway.