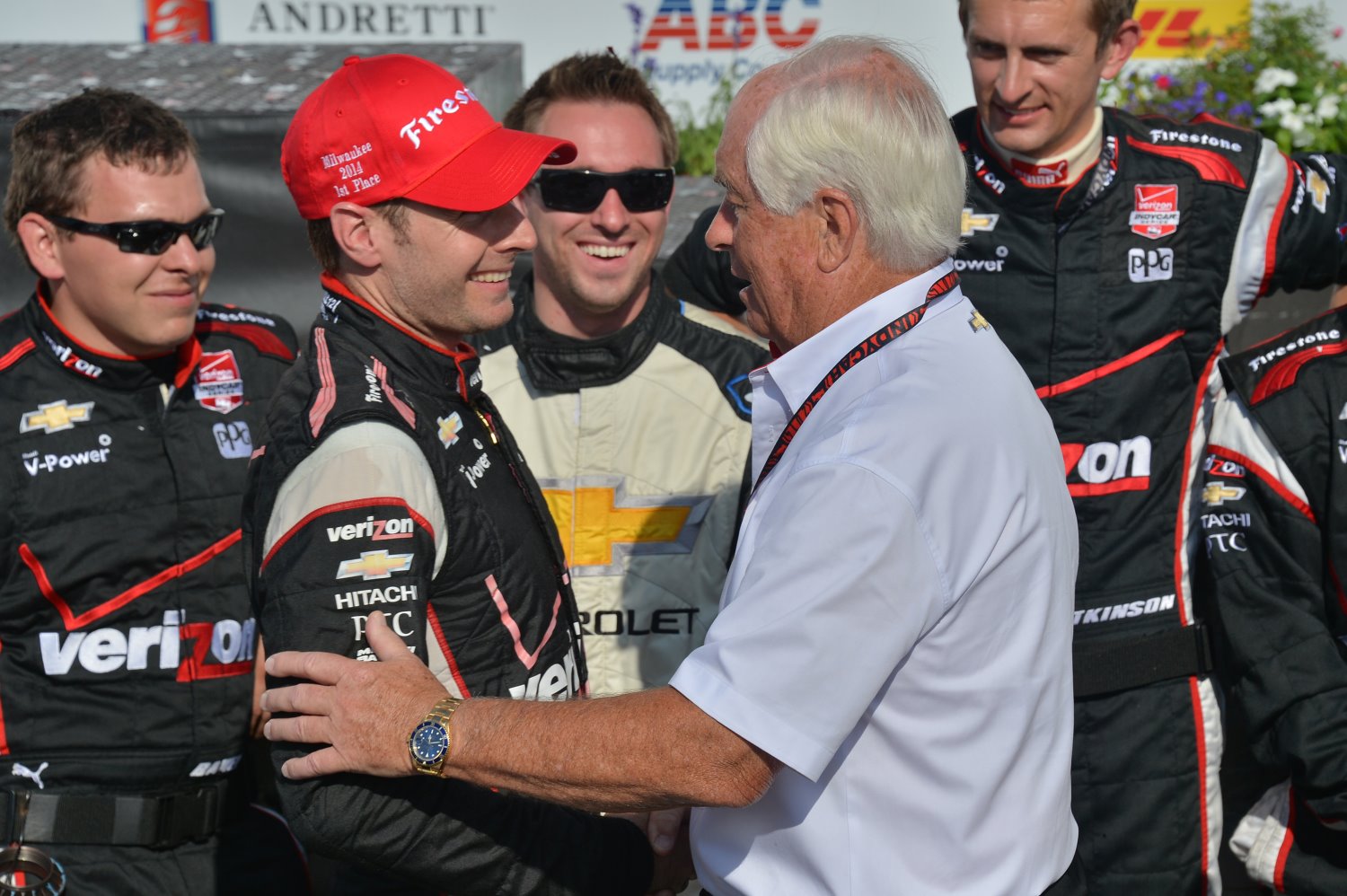 After what had been a rather whacky stretch of seven races, from the Houston doubleheader weekend in late June to Mid-Ohio two weeks ago, a little order was restored to the Verizon IndyCar Series this past Sunday in Milwaukee. There were no roll-the-dice fuel strategies, no varying weather conditions, no late race cautions allowing teams to put fresh tires on the car, and no surprise winners from deep in the field.

Rather, Will Power put it on pole (he has an astonishing 36 career poles in 136 starts), and jumped out to an early lead. Yes, Power was briefly bothered by Tony Kanaan, but ultimately the aggressive Aussie pulled away from the Brazilian, led a gazillion laps, and that was really all she wrote, folks. Power scored a convincing victory at the venerable oval, which means he heads to next weekend's race at Sonoma with a 39-point championship lead over teammate Helio Castroneves.

Speaking of the Championship

The win at Milwaukee victory very simply means this is Will Power's championship to lose folks, and AR1 has already outlined the mathematical scenarios in play for the final two races.

Mathematical scenarios aside, we are well, talking about Will Power. And let's face it: for all Power's sterling qualities, the ability to close out championships is not known to be one of them. But we'll get to that a little later. For now…

A brief note on Kanaan

There's no questioning that Power was clearly the standout performer in Milwaukee. However, from where this columnist sits, Tony Kanaan has been the best driver in the series over the last six weeks, yet has no win to show for it. While there's no cheerleading in the press box, it would be far from a travesty of justice if Kanaan scored a victory in one of the final two races.

Ditto for Josef Newgarden, who in the past two races has shown every bit the speed of the series front-runners.

Ryan Hunter-Reay entered the weekend with a shot at winning a third consecutive race at Milwaukee, and outside chance of winning a second title. He left the famous Mile mathematically alive for the championship. However, a broken suspension Sunday probably ended any realistic hope of the 2012 champ adding another Astor Cup to his trophy case.

And let's face it: other than those mesmerizing 10 laps to end the Iowa race, it's been a pretty disappointing go for the RHR since winning the Indianapolis 500 in May.

That said, the news that DHL has re-upped with Andretti Autosport, and the dynamic partnership between team and driver will remain intact for three years was very welcome news.

To start, from a competitive balance perspective, after a few years of Penske and Ganassi domination, it has been Hunter-Reay foremost, to a lesser extent Simon Pagenaud and this year Ed Carpenter Racing, that have been the catalysts in breaking the Penske-Ganassi stranglehold.

Second, the trials and tribulations of RHR's early career have been very well-documented. But if there is a living, breathing, testament to patience, perseverance and talent harmoniously aligning with opportunity, and ultimately enjoying vast success, it would be Andretti Autosport and Hunter-Reay. And it seems the two may just be getting started.

The other big off-track news at Milwaukee was the announcement Ed Carpenter Racing was merging with Sarah Fisher Hartman Racing. The two one-car operations will form CFH Racing for 2015. Details on an engine manufacturer and such are forthcoming.

Clearly, part of the motivation stems from the disadvantages of being a one-car operation. In this era of limited testing, where a lot of data acquisition is done during race weekends, pooling resources makes sense. Such collaboration makes even more sense for 2015 with the introduction of aero-kits.

That said, everything about the announcement screamed "this was done out of necessity, and neither of us are overwhelmingly excited about it."

How this merger, to what extent it is in fact a merger, plays out will be very interesting to see.

I can tell you the first thing I would do if I was CFH Racing: get Newgarden under contract for 2015.

As reported on AR1 after the Iowa weekend (and inaccurately reported elsewhere), Newgarden is unsigned for 2015, as his initial three-year deal with SFHR expires after this season. This revelation came to light this weekend more publicly, with news of the merger, and Marty Snider of NBC Sports Network reporting SFHR has offered Newgarden a contract, which he has yet to sign.

Newgarden, for his part, played his cards pretty close to the vest, simply saying nothing has been decided.

With Newgarden running up front regularly, an open seat at Andretti a very real possibility, and potentially an open seat at Schmidt Peterson Motorsports, the Tennessee native suddenly finds himself in the enviable position of being the #2 free agent on the market behind Pagenaud.

If you're Newgarden do you wait for the details of the CFH merger to play out? Do you aggressively pursue an opportunity with Andretti? If Andretti gets Pagenaud do you look seriously at SPM, where you have a relationship having won the Indy Lights title in 2011?

And to what extent is Newgarden tied to Honda? If CFH sticks with Chevy, does that make Newgarden more likely to seek out a Honda team? Or will the desire to re-sign Newgarden encourage CFH to go with Honda?

So many questions have emerged already from this merger, particularly pertaining to Newgarden. I will say that when it comes to drivers you potentially build a team around with IndyCar experience and a relative degree of youth, the list of potential candidates drops off after Pagenaud and Newgarden.

And when reading the tea leaves, it seems like young Josef Newgarden suddenly commands more leverage than anyone would have imagined a mere week ago.

Given the history of the venerable Milwaukee Mile, it's fair to say that Indy car fans and those who work within the industry are hopeful, if not entirely optimistic, the event can be sustained.

Of course, Michael Andretti and his company Andretti Sports Marketing resuscitated the race in Milwaukee three years ago after the event fell of the calendar for 2011. ASM has attempted to draw people back with very reasonable ticket prices and a festival atmosphere of games, rides, concerts, etc. ABC Supply was also added this off-season as title sponsor for 2014 and 2015.

Further, it was very clear in last week's lead up to the race that ASM put on an all out blitz to drive tickets sales with driver appearances at car dealerships, bars, restaurants, etc. in the Milwaukee area. Additionally, credit should be given to the ASM for providing ticket-buyers with a full-menu of on-track action unlike other IndyCar oval events (although these 8-car Indy Lights races, leave a lot to be desired).

Still, the event continues to be an uphill battle. Andretti himself noted "tickets aren't where we would like it to be." And with respect to the event beyond 2015, Andretti simply noted it was a "wait and see."

Now, I'm sure there are a host of factors in play. For one, the date has been moved around the past few years.

That said, there's no real faulting the promoter in this instance. All indications are ASM went above and beyond to make the event a success. Maybe the problems plaguing the sport exist on a larger level? I mean, maybe…

The criteria mentioned above are clearly problems. But ultimately the fact too few people go to races and watch on television can be construed as issues symptomatic of a much larger problem: too few people care.

While I've heard lots from INDYCAR and IMS in recent years about condensed schedules, glamping, improving the company's bottom line, how they plan to help NASCAR, and greater synergy within the various divisions of a rebranded internally, but not externally, Hulman & Co., let the record show: I've not heard word one indicating the powers-to-be at 16th and Georgetown have even considered the notion there might be a fundamental issue with the product they are trying to sell.

To be clear, I'm not criticizing such promotional activity per se. But I have to ask: what's the point of such efforts if you're selling a product no one wants?

It's a difficult, sobering question with no easy or apparent answer. But having watched a rebuilding event continue to struggle despite great promotional efforts, it's a more than fair one. And it's probably well past time someone with the ability to enact meaningful change on the sport gives it some hard consideration.

Looking ahead to Sonoma and Fontana, Will Power enters the final two events of the season as the clear favorite to capture his first series title.

Power, of course, finished second three consecutive years from 2010-2012, having each time failed to capitalize on opportunities to close out the championship, most notably a somewhat silly crash in the 2012 finale at Fontana. Also, this season we've seen Power incur numerous pit road speeding violations, inexplicably chop Castroneves while running second late in the race at Pocono, and find himself in tangles with other drivers.

As we saw in Milwaukee, Power is electric on his day. But he can be his own worst enemy, as well, a trait he has continued to display during 2014.

And while we've crunched the numbers for you, and shown that the odds are in Power's favor, the story of the next two weekends is not going to be one of mathematical scenarios, or Power versus Castroneves or any of the other contenders. Rather, the unquestioned story at both Sonoma and Fontana will be Will Power's ability, or lack thereof, to actually manage himself.

Yes, when it comes to these final two races, Will Power is the story folks. And if the story is Will Power, the story is going to end either with the talented Aussie enjoying one long-overdue coronation justifiably recognizing him as one of this era's great Indy car drivers; or we're going to see the 12-Train derail in some unbeknownst manner, in which only the 12-Train can.

I see no in between.