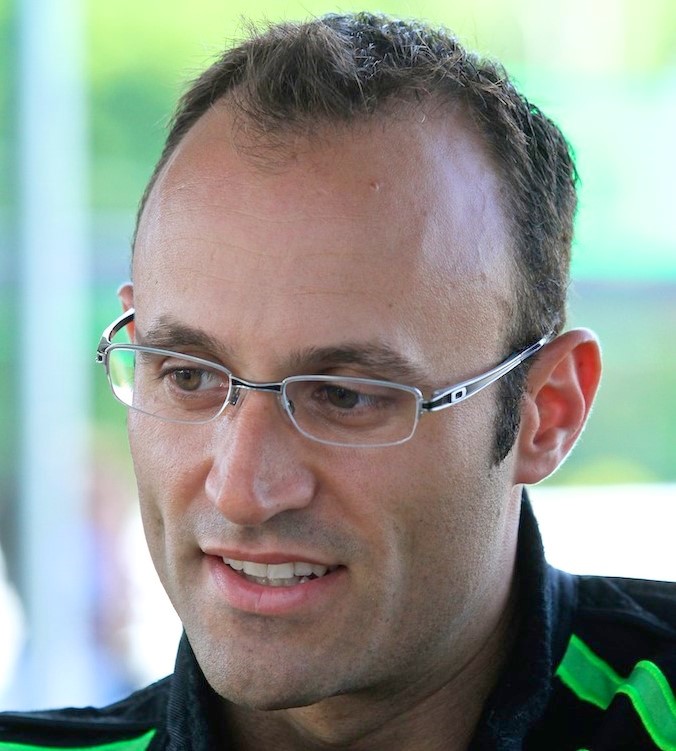 I had the pleasure recently of spending a few minutes speaking with Guy Cosmo. You probably know, the 37-year old sports car racing veteran made news last week, when Marshall Pruett of RACER.com reported Cosmo was pursuing a potential return to open wheel racing. Cosmo, of course, is a product of the American open wheel racing ladder system, having captured the 2002 Star Mazda Championship.

After a decorated career in the junior open wheel formula, Cosmo transitioned to sports car racing, winning the 2005 American Le Mans Series Rookie of the Year Award. Cosmo has since enjoyed success in various prototype and GT categories.

Also, Cosmo has established himself as one of the nation’s top racing coaches, working with drivers of various levels, and conducting both group and private instruction. You can visit Cosmo’s website to read more about his coaching.

However, the subject of our conversation was Cosmo’s latest off-track endeavor, First Gear Project, a crowd-funded platform that supports innovative initiatives within the racing and automotive industry.

Now, on the surface, it might appear that FGP is another user-supported grassroots projects, looking to generate the much-needed revenue to support the aspiring careers of racing hopefuls. And while there is an element of that to FGP, we will see Cosmo has much more in mind.

"We are not a website where racers can just beg for money," says Cosmo. "We want to build bridges; educate people how to engage supporters; encourage passion and creativity for anyone who has a new, better idea."

In short, "rather than just helping people collect check, we are just the medium for people to raise funds on their own." Cosmo wants to utilize his experience within racing to educate people with innovative ideas, and provide them with the tools to "bring those ideas to life."

As for what ideas Cosmo is specifically referring to, well, it could be many things. What about a young driver looking to raise the money to go racing? Sure. Maybe, someone has an idea for a racing book or movie. Whatever the case, FGP was designed to assist people in engaging the support necessary to make "dreams come true."

Currently, there is a very intriguing project on the site looking to fund a prototype sports car designed by Lee Adams, an aerospace engineer from San Diego. The Melleen MSR-1 Sports Car project will create a lightweight carbon fiber/chromoly track car designed to fit DSR safety standards, despite only weighing a mere 700 lbs.

And the innovative Melleen MSR-1 is just one example. Cosmo notes that there are currently numerous initiatives in the queue, which simply need some of the finishing touches necessary to be presented to the public.

Speaking of the public, Cosmo wants FGP to create the platform in which potential supporters, fall in love with the innovative products, and the stories that ultimately. And depending on the specific product, and level of funding, supporters will have options of being the first to pre-order a product, or lending their name in support of an initiative.

Cosmo credits FGP coming to life with the tireless efforts of some supporters, who have chosen to remain anonymous and his wife, Louisa, who serves as the President of First Gear Project. While Cosmo describes himself as the "face" of the project, he notes that it has been Louisa’s behind-the-scenes efforts with the details and formalities that have brought the project to life in the last year.

When I asked Cosmo about marketing for the project he noted that as a start-up essentially, there was not a huge marketing budget. Therefore, they are utilizing his name within the racing industry, and social media as the primary vehicles currently to get the word out.

Of course, in recent years much has been made in this space and others about the difficulties facing the racing and automotive industries going forward. AutoRacing1 applauds Cosmo’s innovative thinking, and efforts in bringing a project to life, which looks to enhance a sport and industry we all love. We wish him, Louisa, and everyone at First Gear Project, nothing but the best.