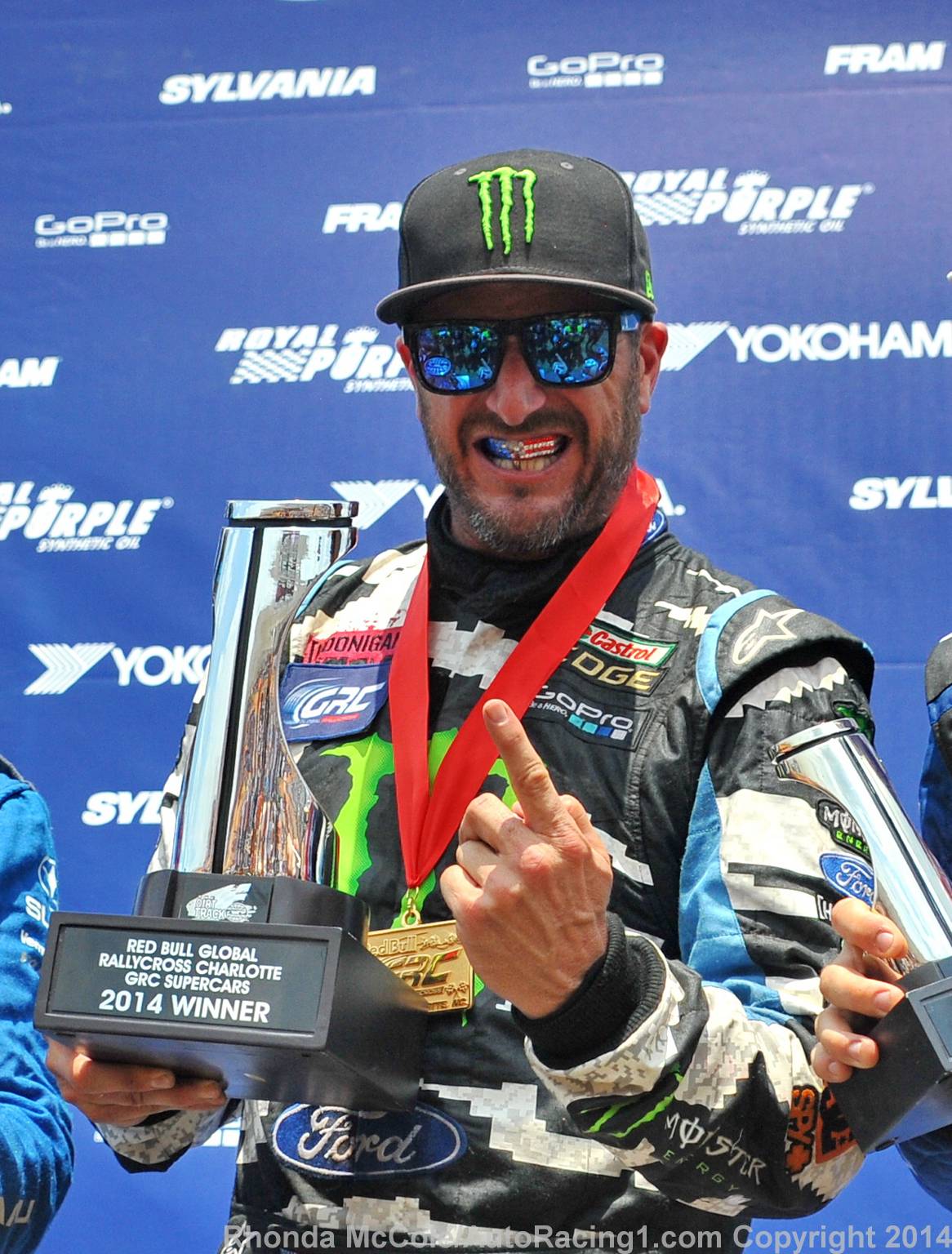 Ken Block completed the weekend sweep with a victory in Saturday’s Red Bull Global RallyCross Supercar final, winning the pole and his heat race on the hard North Carolina clay course at The Dirt Track at Charlotte Motor Speedway.

Block led all the scheduled 10-lap distance, easily beating out Sverre Iaschsen and series points leader Nelson Piquet, Jr., who completed a remarkable comeback of his own to salvage a podium finish.

Block’s victory was his first since last year's season-finale at Las Vegas and his second-straight podium finish after his third-place showing last week in New York.

Block, who spent much of early career driving rally cars on dirt, said the heavy gravel and clay surface of The Dirt Track was key to his success during the weekend sweep.

"For me, most of my career has been on gravel and dirt," said Block. "We were very quick to get the car set up right, to get my Ford Fiesta out to the front and from there be able to find the right lines. The gravel gives us so much more of an opportunity to find different lines and try different stuff. The track constantly changed, and I love that."

Piquet, Jr. racked up his fourth-straight podium finish after a long day that saw the series points leader fail to advance to the final after a fifth-place finish in the opening heat race, forcing Piquet to race his way in along with second-place points driver Scott Speed

In the last chance qualifier, Piquet trailed in fourth place as Speed battled Austin Dyne for the lead. As they came to the white flag, Piquet dived to the Joker Lap, going from fourth to the lead and using his momentum to open an insurmountable gap to the finish with Speed in second.

Piquet then dodged another bullet in the final when his Ford Fiesta ST got hung up on the turn one barrier on the opening lap, bringing out the red flag and a complete restart.

After some slight repairs, Piquet was back in the hunt and again used his Joker Lap to perfection, sliding past Joni Wiman for third spot on lap seven.

He third-place finish was a perfect welcome home for Piquet, having lived in the Charlotte area since his days driving in NASCAR.

"It was good to spend a weekend here at home and see friends and family," Piquet said. "I saw a lot of friends that I made last year in NASCAR around, and it’s good for them to see a new world and more open sport. The weekend had a lot of ups and downs—coming in with the points lead, we tried to eliminate all the risks we had, but until the final it was a rollercoaster ride of emotions. We were just up and down and running around."

In the GRC Lites final, points leader Mitchell DeJong took the checkered flag, beating out brothers Kevin and Oliver Eriksson to claim his third win of the season.