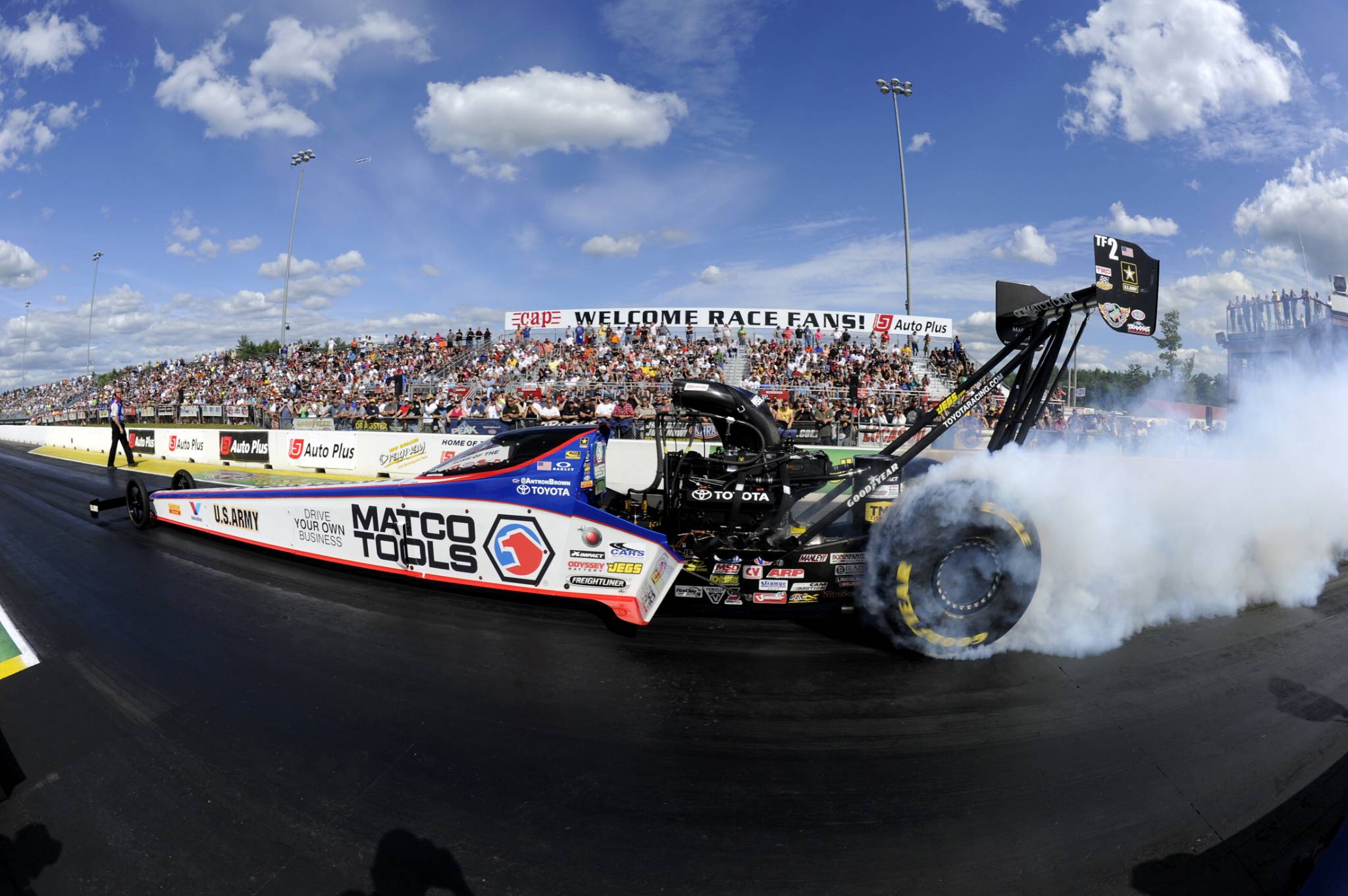 Antron Brown will lead the Top Fuel category from the No. 1 qualifying position in Sunday’s eliminations at the Auto-Plus NHRA New England Nationals.

Brown claimed the top seed with his 3.770-second pass at 323.58 mph on Friday night which shattered the New England Dragway elapsed time record in Top Fuel. It is Brown’s second No. 1 of the season and 37th of his career.

“We got a lot of confidence for tomorrow," said Brown, the 2012 world champ who will race for his fourth win of the season when he meets Todd Paton in the first round. “It’s going to be a good race. Everybody is running so close. Everyone has their work cut out for them. We have to definitely be on our A game and attack each round."

Points leader Doug Kalitta is the No. 2 qualifier with a run of 3.773 at 323.89 in his Mac Tools dragster. He will race Terry McMillen in the first round.

Englishtown winner Richie Crampton had the quickest Saturday run in his GEICO dragster and qualified third, while Brittany Force qualified fourth in her Castrol Edge dragster. Crampton will race Dom Lagana in the opener, while Force will meet Clay Millican.

Hight sped to the first three-second Funny Car run in track history on Friday with a performance of 3.998 at 321.58 in his AAA Ford Mustang and it held through Saturday’s two qualifying sessions to give Hight his first No. 1 spot of the season.

“Tomorrow’s a new day, and [crew chief] Mike Neff’s the best," Hight said. “He’ll race it one round at a time. He’s not going to go up there first round and try to set low E.T. of the round. We’re going to look at each opponent and race smart. That’s why we’ve won a lot of rounds this year."

Hight now has 36 career No. 1 qualifiers, fifth all-time in Funny Car. He will open eliminations against Mike Smith.

Two-time Funny Car world champion Cruz Pedregon qualified second with a 4.026 at 307.44 in his Snap-on Tools Toyota Camry. Pedregon, a recent Funny Car winner in Englishtown, will face Jeff Arend in the first round. Defending event winner Courtney Force qualified third in her Traxxas Mustang and will race Dave Richards.

In Pro Stock, Gray recorded his second consecutive No. 1 qualifier following his Friday track record time of 6.485 at 212.79 in his Gray Manufacturing Chevy Camaro.

“We will see if we can get by first round," said Gray, who will race Val Smeland in the opening round. “There’s always a chance that you will, always a chance you won’t. It’s always 50/50 out there."

Series leader Erica Enders-Stevens is the second seed following her 6.489 run at 213.98. The Elite Motorsports Chevy Camaro driver will meet Larry Morgan in round one. Defending event winner Allen Johnson qualified 12th and will race teammate Jeg Coughlin in a first round battle between Dodge Darts.

In Pro Stock Motorcycle, Krawiec took over the No. 1 qualifying position from Hector Arana Jr. with a track-record time of 6.794 at 193.32 on his Screamin’ Eagle Vance & Hines Harley-Davidson.

"We went back and looked at all the data last night," said Krawiec. "When we came off the truck, both bikes were running well. We were struggling a bit though, in going down the track and making good runs. …We had to make a couple changes to make some more power."

It is Krawiec’s third No. 1 of the season and 17th of his career. He will meet Justin Finley in the first round.

Arana Jr. still holds the track speed record at 198.50 mph and will race his Lucas Oil Buell in the first round against Jerry Savoie. Defending event winner John Hall qualified seventh and will be paired with rookie Chaz Kennedy on Sunday.